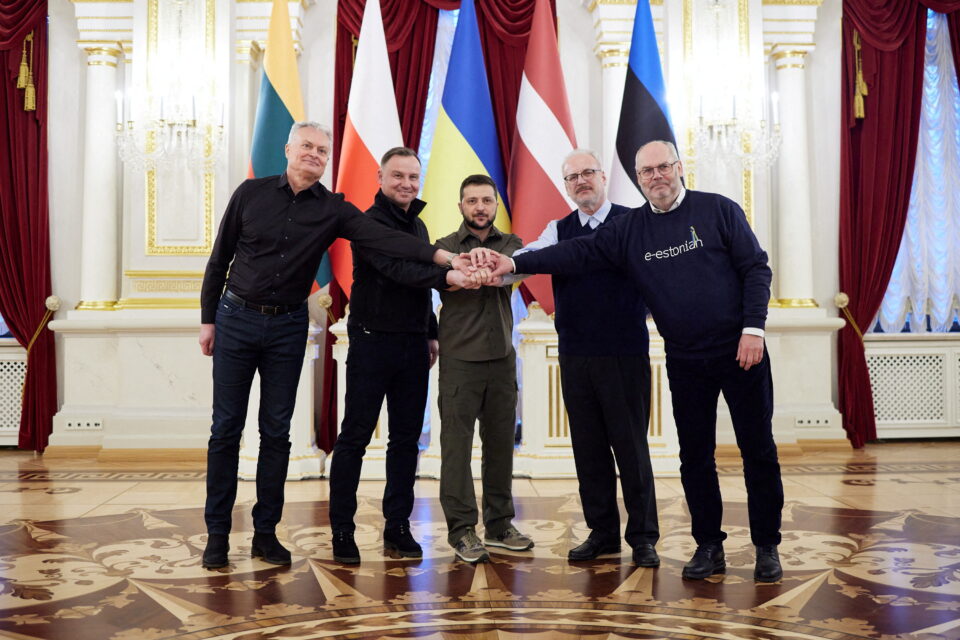 By Andrzej Duda, the president of Poland

Almost one year ago, as Poland marked the 230th anniversary of the adoption of the Constitution of May 3, Warsaw was visited by the presidents of Ukraine, Estonia, Latvia and Lithuania. Besides neighbourly bonds, our countries share common values, culture, history and present-day challenges. These links are symbolised by the world’s second constitution whose aim was to transform Polish nobles’ democracy into a more efficient constitutional monarchy. Unfortunately, it came too late. Three absolutist powers – Russia, Prussia and Austria – joined forces to destroy the unique political and civilisational project of the multi-ethnic and multi-faith First Republic. Most ancestors of today’s citizens of Central and Eastern European countries became the tsar’s subjects. They were forced to contribute to the expansion of the Russian Empire with their blood, property and work.

Mindful of this historical lesson – the looting, persecution, destruction of cultural heritage and acts of genocide committed by Russia and the Soviet Union against our nations – as well as the de facto occupation of part of Ukraine by Russian Federation troops since 2014, we, the presidents of the region’s countries, signed a solemn declaration. We made it clear that a uniting Europe should remain open to all countries and nations that share its values and ‘that to all of us the solidarity of nations, especially under current threats to our common security, is one of the cornerstones of peace, stability, development, prosperity and resilience […]’.

The words were reiterated with equal force nearly a year later, when the presidents of Poland, Ukraine, Lithuania, Latvia and Estonia met again on April 13, 2022. This time round we were hosted by President Volodymyr Zelenskiy. We gathered in Kyiv, even as the city was being shelled by the Russian invaders.

The dramatic calls for firmness and European solidarity in the face of Russian neo-imperialism that have been made for years failed to convince some political elites on our continent. Putin’s openly declared plan to reinstate – in one form or another – the “prison of nations” that was the Soviet Union and its sphere of influence in the former Eastern bloc countries; glorifying communism and Stalin; sowing division among the European family of nations; attempts to interfere in the democratic procedures of Nato and EU member states; repressions and assassination attempts against Russian dissidents; repeated violations of air and sea space of European counties by the Russian armed forces and hostile cyber activities; the invasion of Georgia in 2008 and hybrid war against Ukraine in 2014; the hybrid attack in 2021 when Lukashenko’s Moscow-controlled regime flew in Middle East migrants to Belarus and then forced them to storm Poland’s eastern border which is also the border of Nato and the EU – all these “alarm bells” did not stop some politicians and leaders from bringing up the need to “understand Russia and its sensibilities”.

The representatives of the countries in our region were not believed when they warned that the new infrastructural investments and contracts related to the supply of Russian energy products would sooner or later be used by Moscow as a tool of brutal blackmail. The recent events have proved us right.

February 24, 2022 is a watershed date in the history of the world. After the tragic conflict in Bosnia and Herzegovina from 30 years ago, a new war has erupted in Europe. Scenes not witnessed here since 1945 are again taking place. Thousands of soldiers and civilians are killed. Villages and cities are being bombed out of existence, while the Russian aggressors do not allow their inhabitants to be evacuated. Their tactics is one of terror and scorched earth. They commit acts of plundering, rape and torture – including against women and children – as well as genocidal mass executions. The on-going investigations carried out by the prosecutors of the International Criminal Court must result in punishing those who gave orders and perpetrated these horrible crimes against humanity.

From the very outbreak of the war in Ukraine, the Polish authorities, volunteers and millions of ordinary Poles have helped those fleeing the conflagration. We help citizens of over 150 countries get back to their homes. Almost three million people have entered Polish territory, out of which nearly two million have stayed. They are mainly women, children and old people. Even though we call them guests rather than refugees, even though they have found shelter in private homes, parish houses, monasteries, health care centres and public buildings rather than transition camps, the situation remains a great challenge for us. By way of comparison, during the migration crisis of 2015, Europe admitted just over 1.8 million people. We urgently need financial support that would be at least as high as the one granted to Turkey after the country received three million refugees from the Middle East.

First and foremost, however, help must be provided to Ukrainians who are defending themselves against criminal aggression. They need military equipment and unflinching economic pressure put on Russia to weaken its war machine.

The fate of our continent is being decided on the plains of Ukraine. It is there that the unbelievably dramatic struggle is waged for the safe future, freedom, identity and reputation of the entire Europe. The time of talking is over. We now have to show solidarity and take firm action.

Andrzej Duda is the president of of Poland. This text has been simultaneously published in the Polish monthly “Wszystko Co Najważniejsze” as part of a project carried out with the Poland’s central bank (Narodowy Bank Polski) and the Institute of National Remembrance

Our View: Naïve to think new authority will stamp out corruption