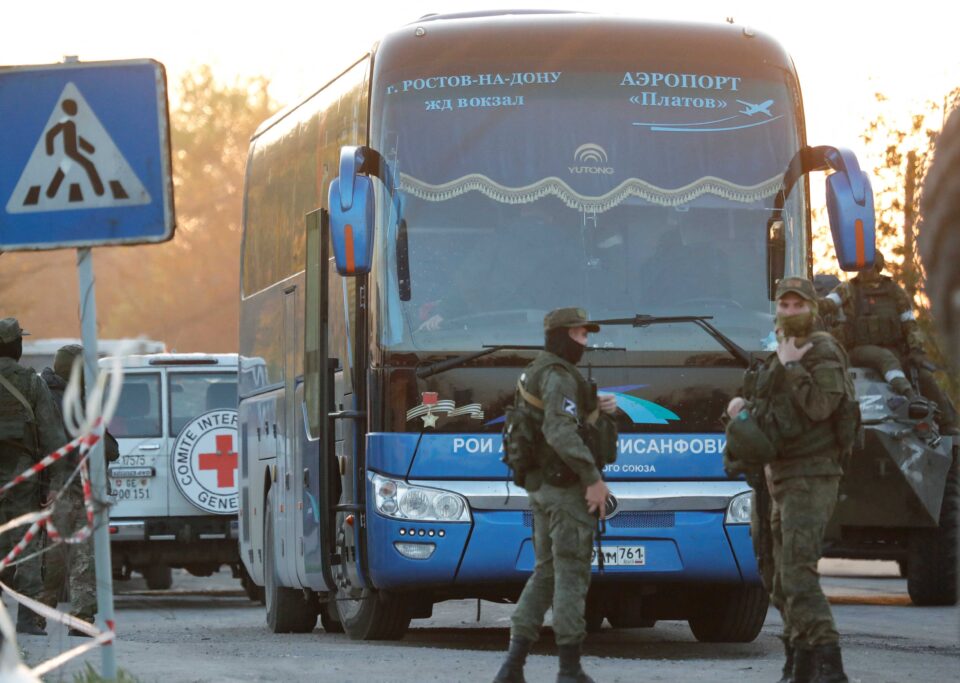 Evacuations of civilians trapped in a bombed-out steelworks in the city of Mariupol resumed late on Friday, hours after Russia was accused of violating a truce intended to allow them to depart after weeks under siege.

Mariupol has endured the most destructive bombardment of the 10-week-old war, and the sprawling Soviet-era Azovstal plant is the last part of the city – a strategic southern port on the Azov Sea – still in the hands of Ukrainian fighters.

Ukraine says Russia has stepped up attacks on the plant in the hope of seizing it by Monday, when Moscow marks Russia’s victory over Nazi Germany in World War Two.

U.N.-brokered evacuations of some of the hundreds of civilians who had taken shelter in the plant’s network of tunnels and bunkers began last weekend before being halted by renewed fighting.

But on Friday afternoon, two buses carrying 25 civilians, including children, arrived at the staging post of Bezimenne, around 30 km (20 miles) to the east. A further 23 evacuees were reported to be on their way, with more expected.

The city’s mayor has estimated 200 people remained trapped at the plant with little food or water.

Mariupol authorities earlier said Russian forces had fired at a car that was involved in an attempt to evacuate the plant, killing one Ukrainian fighter and wounding six.

Russia had no immediate comment. It has previously said humanitarian corridors were in place.

Andriy Biletsky, a founder of the Azov Regiment holed up in the steelworks, said it was under attack and called on the United Nations and world leaders to help rescue everyone there.

In a video from the plant posted online late on Thursday, an Azov regiment medic who gave his name as Hasan described people dying from wounds and starvation.

Ukrainian President Volodymyr Zelenskiy described the blockade of Mariupol as torture and said if Russia killed civilians or troops who could otherwise be released, his government could no longer hold peace talks with Moscow.

The port, which lies between the Crimea Peninsula seized by Moscow in 2014 and parts of eastern Ukraine taken by Russia-backed separatists the same year, is key to linking up the two Russian-held territories and blocking key Ukrainian exports.

Nearly 25 million tonnes of grain, needed to prevent prices spiralling and causing hunger around the world, were stuck in Ukraine, said Josef Schmidhuber, Deputy Director of the U.N. Food and Agriculture Organization’s Markets and Trade Division in Geneva.

He described the situation as “almost grotesque.”

Ukraine‘s general staff said Russian forces were continuing to try to take over the rest of eastern Ukraine, where Russia’s defence ministry said it had destroyed an ammunition depot in Kramatorsk and shot down two Ukrainian warplanes.

Ukraine said it had captured 11 Russian snipers in the region around its second city, Kharkiv.

It was not possible to independently verify either side’s statements about battlefield events.

Moscow calls its actions a “special military operation” to disarm Ukraine and rid it of anti-Russian nationalism fomented by the West. Ukraine and the West say Russia launched an unprovoked war. More than 5 million Ukrainians have fled abroad since the start of the invasion.

In Mariupol, Ukraine‘s general staff said on Friday morning Russia had resumed its efforts to overrun the Azovstal plant, including with air support.

A member of the self-proclaimed Donetsk People’s Republic forces fighting alongside the Russian army in eastern Ukraine told Reuters he thought Ukrainian forces had little strength left to defend Azovstal.

“It won’t last long,” said the fighter who gave his name as Alexei, speaking on Thursday near the plant. He did not provide evidence for his statement.

Russian President Valdimir Putin declared victory in Mariupol on April 21, ordered the plant sealed off and called for Ukrainian forces inside to disarm.

Asked about plans for Russia to mark the World War Two anniversary day in parts of Ukraine it holds, Kremlin spokesperson Dmitry Peskov said: “The time will come to mark Victory Day in Mariupol.”

U.S. President Joe Biden and other Western leaders plan to hold a video call with Zelenskiy on Sunday, the White House said, in a show of unity before Russia marks Victory Day. Biden is also expected to sign a new weapons package worth at least $100 million for Ukraine, U.S. officials told Reuters.

Ukraine and its western allies say that after failing to seize the capital, Russian forces have made slow progress in their revised aim of capturing the country’s east and south, but may also plan to involve Ukraine‘s western neighbour, Moldova.

Kyiv and Moscow have blamed each other for recent mysterious blasts in a pro-Russian breakaway part.

The most severe sanctions ever imposed on a major power have impaired Russia’s $1.8 trillion economy, and the European Union has proposed more.

But that new package, which includes an oil embargo, has run into some opposition, with Hungarian Prime Minister Viktor Orban likening that to an “atomic bomb” dropped on the economy.

Ukraine will need at least 10 years to demine its territory, official says