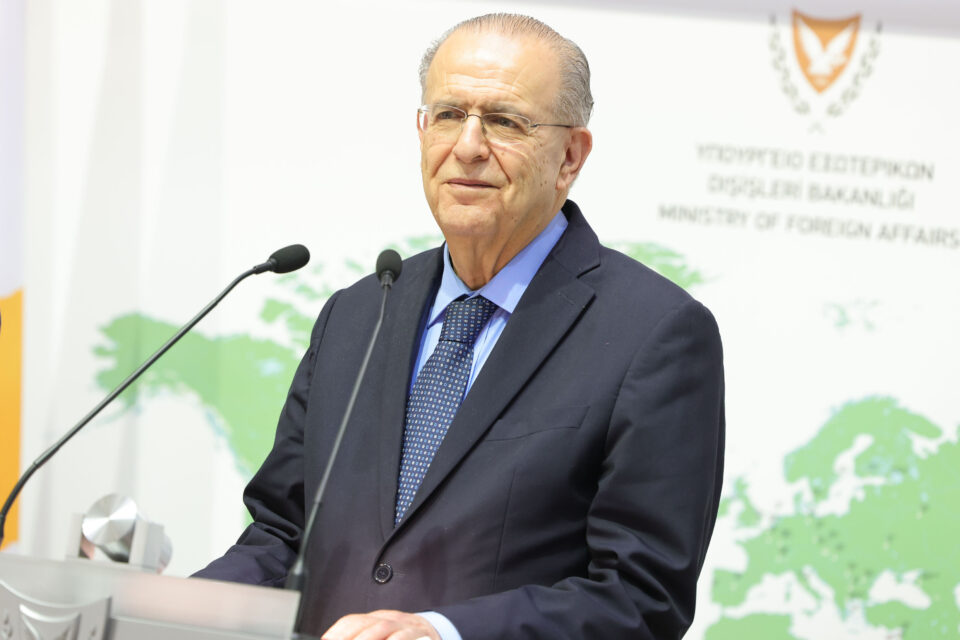 Foreign Minister Ioannis Kasoulides said that he can no longer rule out the Kremlin resorting to nuclear weapons, as changes to the international order are on the scale of post WWII and that the latest proposed sanctions seriously threaten Cyprus’ economy.

The wide-ranging and frank one-hour interview with state broadcaster CyBC on Thursday night saw Kasoulides confirm that the US is expected to lift the arms embargo on Cyprus in its entirety within a year.

The foreign minister expects the total lifting of the US arms embargo on Cyprus to be completed within nine to 12 months. Asked, however, whether Nicosia would then proceed to purchase weapons – he laughed, saying: “No, we have no money.”

But he noted that in the future the defence ministry will be able to also look towards the US market.

Elsewhere, Kasoulides expressed his frustration that Turkey’s role in the region – particularly in the eyes of the US – has been significantly upgraded due to its “theatrical acts and its supposed role as a mediator in the Ukraine crisis.”

As for the course of the war, Kasoulides said he could no longer rule out Russia resorting to the use of nuclear weapons, in the same sense that he had not expected Moscow to proceed with flattening entire cities.

In explaining the magnitude of the global shift, he said that: “I believe the security architecture which existed previously in Europe, the stability and safety, has been destroyed, trampled… there have been many developments, which after this war there must be a complete reevaluation of the European security framework.”

Asked about the seismic changes and how that has led to Sweden and Finland – historically neutral countries – to seek Nato membership, Kasoulides said a Cyprus application to the military alliance has not been discussed at the governmental level, although there are some who have viewed such an eventuality positively. He stressed however, that the only real military threat posed to Cyprus is from Nato-member Turkey – not from Russia, as may be the case for a nation such as Finland.

As for the sanctions, he explained that the latest round of proposed measures could end up hurting EU members such as Cyprus more than the intended target of Russia – emphasising that Nicosia has pushed back on some of the more severe proposals.

“We have key sectors in the economy which are in fact the only ones, they are: tourism, shipping and services,” he said, adding that if they are further threatened then it could spell the collapse of Cyprus’ economy.

The foreign minister said that it cannot be that the measures being imposed on Russia impact it less than an EU member state such as Cyprus. Kasoulides explained that the greatest strength of the bloc has been its unity but that is currently under threat in light of the mounting proposals for tighter sanctions which threaten member states – adding that he will raise this issue at the next foreign minister’s council.

Indeed, the proposed sixth package of sanctions against Russia has seen Nicosia object to banning the transfer of Russian oil from European-flagged ships, as well as to the measure banning the provision of consulting and accounting services to Russians. An additional sanction that has been on the table, but not announced, is a ban on the sale of real estate to Russian citizens, even to those permanently residing in the EU. Holding a Cypriot passport is not an exception to the sanctions.

But in expressing his grief and shock at the situation in Ukraine, Kasoulides said that the total annihilation and flattening of cities – seemingly referring specifically to Mariupol – as was previously seen in the brutal battles for Grozny and Aleppo, was unthinkable.

“I did not expect that in the year 2022 the methods of military operations would be the complete flattening of cities, indifferent to the unarmed victims – wars occur between armies,” he said.

Asked about why the Russian authorities are employing such tactics, Kasoulides said that they did not expect such strong resistance.

“They [the Russian command] and many analysts expected that within 10-15-20 days they would have achieved their primary aim of Kyiv being conquered and the arrest of [Ukrainian President Volodymyr] Zelensky,” he said.

Kasoulides put the failure of Russia to achieve its aim down to the Kremlin overestimating its own military capabilities and underestimating the Ukrainian resistance.