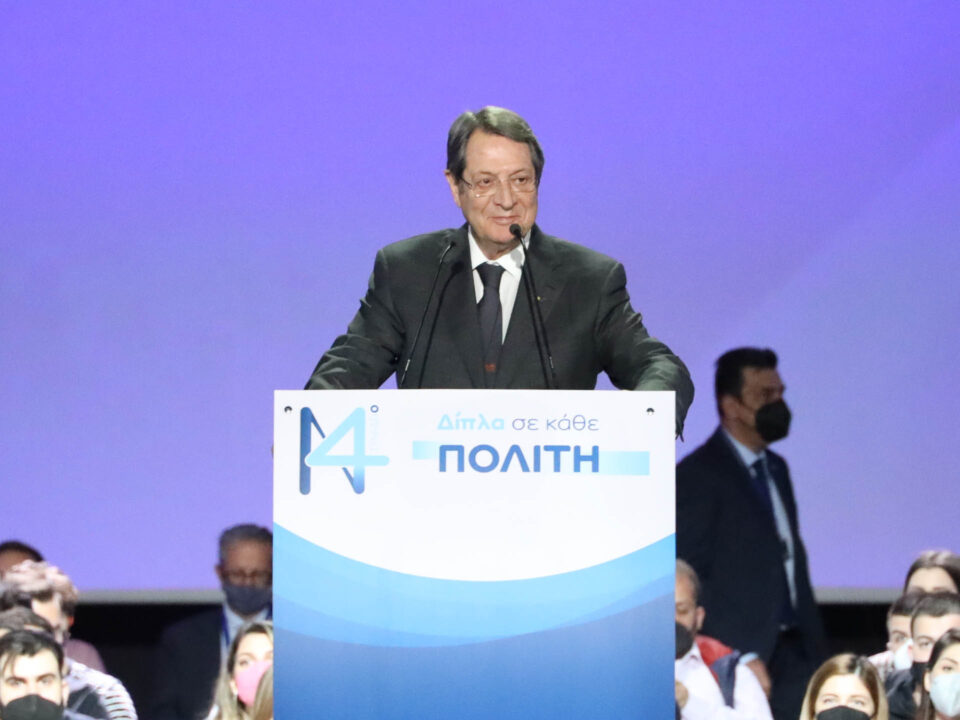 President Anastasiades made a rousingly defiant speech at the 14th Congress of the New Democracy party in Athens, at which he was a guest speaker, to justify his handling of the Cyprus issue that has gone some way to cementing the partition of the island along the current ceasefire line.

He said he did everything he could for a “solution that would answer the concerns of the Greek Cypriots,” but “unfortunately, Turkey’s demands reached the point of turning the Cyprus Republic into a protectorate of Ankara, and this could not be accepted.” He added that we would “not retreat from positions that secure national dignity” because, like Greece, on national issues we follow “the philosophy of patriotic realism, without ignoring the pride that history dictates to us”. The patriotic realism was exemplified by a defiant assertion: “Honourable settlement, honourable peace, but no retreat, no subjugations, no submission to any of the irrational demands.”

Why is he so keen for a resumption of the talks, pestering the UN secretary-general for the appointment of a special envoy/representative if Turkey’s objective was to use a settlement to turn Cyprus into a protectorate? Had he heard that Ankara no longer wants to subjugate the Greek Cypriots and deprive them of their national dignity? After all, the status of protectorate is no longer on the table, Turkey is now refusing to discuss anything other than a two-state solution, which Anastasiades also supported covertly until he was faced with a hostile reaction by a sizeable section of the Greek Cypriot population.

With his second term in its final year, Anastasiades is resorting to patriotic platitudes to defend the policy that will result in partition without even the fenced part of Varosha being returned to Greek Cypriots. And the message is that he does not bear a shred of responsibility for handing over all the occupied part of Cyprus to Turkey because he was following the philosophy of patriotic realism. Partition just happened because Turkey wanted the submission of Greek Cypriots to its irrational demands, or, to use the more familiar lingo, because of Turkish intransigence. The president of Cyprus had no real role to play in peace talks other than as defender of our national dignity.

The Cyprus problem is no longer an issue for anyone other than Anastasiades attempting to take care of his political legacy. Foreign Minister Ioannis Kasoulides, in an interview on CyBC on Thursday, said US Under-Secretary of State Victoria Nuland had made it clear the Cyprus problem would not be visited until after the general elections in Turkey in June next year. This could also have been a diplomatic way of saying that there was no point dealing with the Cyprus issue as long as Anastasiades was in office, the outside world recognising that he had no real interest in a settlement, especially 10 months before stepping down.

On the US agenda for the region is now energy cooperation, something Anastasiades discussed with Greece’s Prime Minister Kyriakos Mitsotakis at their meeting on Friday. Mitsotakis is scheduled to meet President Biden next week and Anastasiades said there was coordination between Greece and Cyprus ahead of that. The US, in view of the war in Ukraine, has been working on establishing energy cooperation in the East Mediterranean and the matter will be discussed in the Biden-Mitsotakis meeting.

After his meeting with Mitsotakis, Anastasiades said the deliberations about energy in the region were also discussed, before saying: “The common position of Greece and Cyprus is that we do not exclude cooperation with any country, neither from the trilateral, nor from the multilateral cooperation we have developed.” This was an admission that Cyprus was prepared to be part of regional energy cooperation in which Turkey would probably have a prominent role. It is not a case of Cyprus welcoming Turkey into its tri- and multi- lateral alliances, on certain conditions, as Anastasiades claimed, but a matter of Cyprus joining the regional energy planning or risk being left out. We are in no position to set conditions, although some understanding would have to be reached with Turkey, which is unlikely to be very accommodating to Nicosia.

There could be differences between Turkey and Greece that the US will be unable to bridge, but if energy cooperation also involving Israel is brokered by the Americans, Cyprus may face a stark choice – cooperate with the occupier or be left out of regional planning. On the plus side for Anastasiades, if he reaches an understanding with Turkey on energy that is compatible with the US plans for the region, the main reason for a settlement of the Cyprus problem would cease to exist.