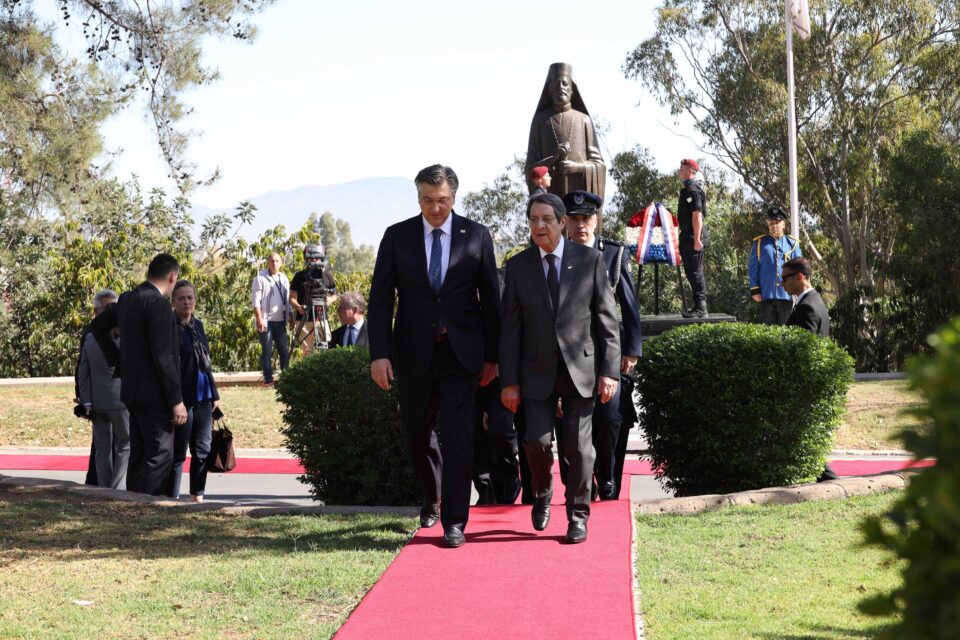 Cyprus and Croatia will increase the volume of trade in goods and services, President Nicos Anastasiades said Wednesday following bilateral consultations with the Croatian Prime Minister.

Andrej Plenkovic, who is making his first official visit to Cyprus, was welcomed at the palace this morning where he was received by President Nicos Anastasiades with an official welcome. The president had hosted a dinner in his honour the previous night.

The two country leaders had a private meeting and later extended consultation with the participation of the members of the delegations of the two countries before they made statements to the press.

Anastasiades hailed his Croatian counterpart’s “historic” visit saying it was a turning point in bilateral relations, adding that next year would mark the 30th anniversary of the establishment of relations between the two countries.

The political dialogue at the highest level conducted in recent years between the two countries, Anastasiades added, has resulted in bilateral relations entering a new phase, particularly in the fields of education, tourism, trade and investment.

The Cyprus government attaches “great importance” to the completion of the Double Taxation Avoidance Agreement between Cyprus and Croatia, which, according to the president, will strengthen bilateral economic relations.

On tourism, the president said that the increase in direct flights between the two countries in the last two years will continue to contribute to further strengthening cooperation in this sector.

During bilateral consultation on Wednesday, the two leaders agreed to take initiatives to increase the volume of trade in goods and services, as well as to implement investment programmes, Anastasiades said.

Referring to the recent signing of a Memorandum of Understanding with Estonia in the field of digital transition, the president expressed his desire to sign a similar Memorandum with Croatia.

The president added he proposed the signing of a memorandum of understanding with Croatia in the field of shipping, “given Cyprus’ expertise” in the sector.

Issues on the European agenda and the Cyprus problem were also discussed.

Plenkovic briefed Anastasiades about the situation in Ukraine after his visit to Kyiv on May 8, with Anastasiades noting in his statements how “the situation is deteriorating at an alarmingly high speed” but that EU would continue to support the war-torn country at political, diplomatic, economic and technical level.

“At the same time, we are united in adopting sanctions against Russia in an effort to put pressure on it to reconsider its actions, to end hostilities and to engage in negotiations to find a diplomatic solution,” the president said, highlighting that these sanctions inevitably have a cost for our own economies.

“Recently we have seen some proposals that may have a huge negative impact on the economies of member states and a questionable impact on Russia,” he said.

Naming Turkey, Anastasiades noted how third countries that cooperate with the EU must align their foreign and security policies with those of the EU for the sanctions to have a maximum impact.

“Turkey’s decision not to align with the sanctions against Russia is unacceptable and it is right that the EU puts pressure on Turkey to adopt these sanctions and abandon the tactics of self-interest that, among other things, undermine the purpose of the sanctions.”

He also briefed the prime minister on Turkey’s ongoing provocations and violations both on the territory and in the maritime zone of the Republic of Cyprus, saying he would continue his efforts and would insist on the need for the Turkish Cypriot side to return to the negotiations.

In the context of the energy crisis, Anastasiades briefed his Croatian counterpart on projects such as the EastMed pipeline and the electricity interconnector (EuroAsia, EuroAfrica interconnector). He added that issues related to migration, climate change and the Western Balkans were also discussed.

For his part, the Croatian prime minister said, inter alia, that Cyprus and Croatia can study ways for both countries to benefit from their potential in terms of gas, pipelines and other related investments.

He added his visit offers the opportunity to further strengthen bilateral relations in various areas such as energy, trade, investment in sectors such as pharmaceutical companies and digital technology.

On the Cyprus issue, Plenkovic said that he strongly supports president’s initiatives that can increase trust between the two communities.

“Croatia has always taken a principled stand on the Cyprus issue, supporting your efforts, advocating a peaceful solution and supporting all efforts to bring the parties closer to your proposals, which are in line with UN Security Council resolutions on respect for international law, sovereignty and territorial integrity.

“This position will not change. It has always been consistent and clear,” he added.