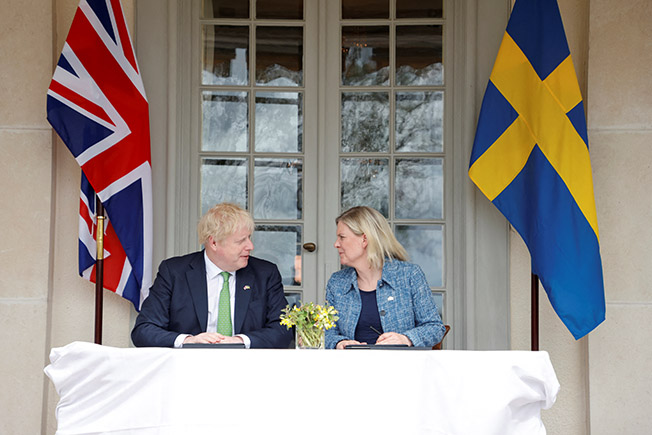 British Prime Minister Boris Johnson on Wednesday said he had agreed new deals with Sweden and Finland to bolster European security, pledging to support both countries’ armed forces should they come under attack.

The agreements, described by Britain as “a step-change in defence and security cooperation”, will go some way to assuage fears in Finland and Sweden over threats made by Russia should either nation decide to join NATO. Read full story

“What we are saying, emphatically, is that in the event of a disaster or the event of an attack upon Sweden, then the UK would come to the assistance of Sweden with whatever Sweden requested,” Johnson said after meeting Swedish Prime Minister Magdalena Andersson.

Johnson would not say whether the UK would send troops to Sweden in the event of an attack.

“It is up to Sweden to make the request and to spell out exactly what support is requested,” he said.

He was due to travel to Finland later in the day.

Russia’s invasion of Ukraine has forced a rethink of how Sweden and neighbour Finland safeguard national security. Read full story

“Are we safer with this declaration? Yes,” Andersson told reporters at a briefing with Johnson at the Swedish government’s country retreat south of Stockholm.

“The support will be given on request by the affected country and may include military resources.”

Sweden and Finland have also received assurances of support from the United States and Germany.

Sweden and Finland already have close ties with Britain and are part of the Joint Expeditionary Force, a multinational military group focused on security in the High North, North Atlantic and Baltic Sea regions.

But the war in Ukraine has increased fears in Stockholm and Helsinki that bilateral agreements are no substitute for Article 5 of NATO’s charter, which guarantees that an attack on one member state would be considered as an attack on all.

Sweden is coordinating with Finland over possible NATO membership and both countries are expected to announce their intentions in the coming days.Read full story

“If Finland makes this historic step it is for the security of our own citizens,” Finnish Prime Minister Sanna Marin said during a visit to Japan on Wednesday. Read full story

“Joining NATO would strengthen the whole international community and stand for our common values.”