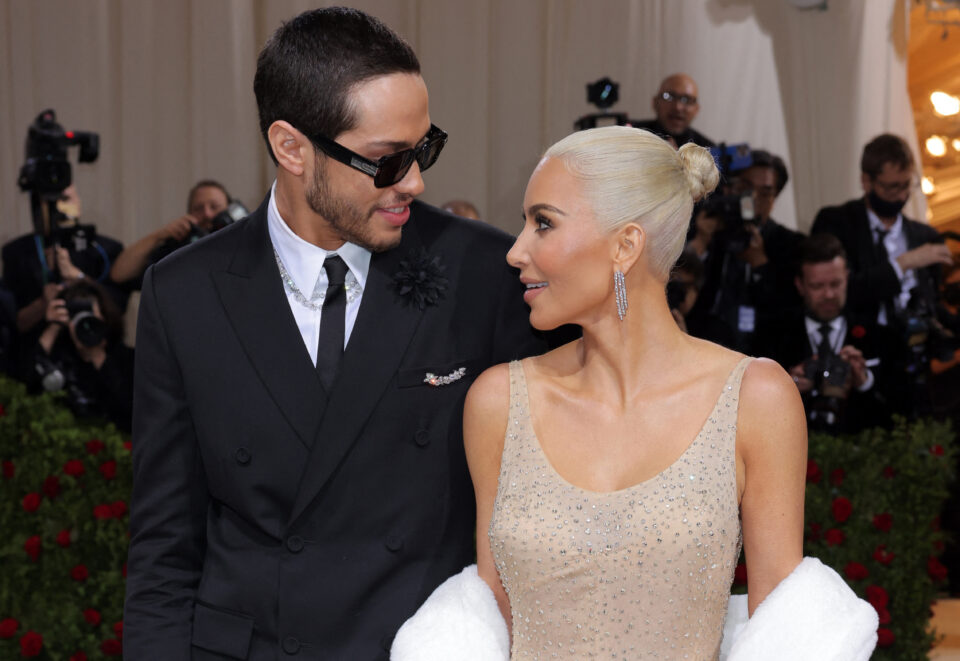 Kim Kardashian and Pete Davidson arrive at the In America: An Anthology of Fashion themed Met Gala at the Metropolitan Museum of Art in New York City, New York, U.S., May 2, 2022. REUTERS/Andrew Kelly

In the course of her Met Gala attendances, Kim Kardashian has worn floral Givenchy (attending for the first time in 2013, pregnant with her first child), silver Balmain, gold Versace and latex “wet look” Thierry Mugler.

Last year, following the separation from her husband Ye (Kanye West) she wore head-to-toe black Balenciaga, an ensemble that rendered her a shadow, a silhouette, recognisable only by the familiar shape of her body.

This year, on the arm of new beau Pete Davidson, Kardashian has once again altered her body and reimagined her look. She lost 7kg in a matter of weeks and spent 14 hours bleaching her hair blonde: all to fit into a delicate, beaded Jean Louis dress, originally drawn by a young Bob Mackie and once worn by Marilyn Monroe.

This is not just any vintage gown. This is a piece of American history. Monroe wore the dress in 1962 for the 45th birthday celebrations for President John F. Kennedy, where she famously serenaded him with a sultry rendition of Happy Birthday, Mr President.

The ethics of wearing such a fragile piece of material history are one thing. The logistics required – beyond the crash diet and hair dye – are quite another.

The elaborate nature of this performance attests to Kardashian’s commitment to the event, her dedication to fashion and her desire to attract maximum attention.

Vogue reports Kardashian wore the dress for only a matter of minutes, just as she walked the red carpet.

She was ushered out of her hotel through barricades against the paparazzi, fitted into the gown by a conservationist from the Ripley’s Believe It or Not Museum (who purchased the dress at auction in 2016 for a record US$4.8 million) in a small fitting room outside the museum, escorted up the steps by Davidson and hovering security guards, and then changed into a replica of the dress (also owned by Ripley’s) for the remainder of the party.

The interview in Vogue illustrates her reverence for Monroe, especially in that gown and at that historic event.

Monroe and Kardashian share much in common. They have recognisable bodies; famous for their sex appeal. They are petite women, 168cm and 157cm respectively. Both have been married three times. Kardashian, at 41, is just five years older than Monroe when she died, only three months after serenading the President at Madison Square Garden.

They are also vastly different. Monroe, a silver screen icon; an actor of remarkable talent. Kardashian, a reality TV star and icon of the modern celebrity age; famous for being famous.

By wearing this dress, radically (unhealthily) transforming her body into an approximation of Monroe, Kardashian attempted to reiterate their likeness.

Just as she has morphed herself into a facsimile of Cher or Naomi Campbell, or transformed her style under the tutelage of her ex-husband, Ye: Kardashian is nothing if not a fashion chameleon.

Reshaping the nature of celebrity

Kardashian is also irrefutably herself. She has constructed her own form of celebrity and has fought fiercely for its legitimacy. Her inclusion on the Met Gala guest list in the first place – initially only as Kanye’s plus-one – was hard won.

So, what does it mean for this peerless contemporary celebrity to appropriate the dress, the aura, the mythology of an historical Hollywood icon?

Some commentary has suggested Kardashian would be lucky to have half the charisma, the magic of Monroe. This may be correct, yet it also somewhat misses the point.

Regardless of your thoughts about Kardashian, it is undeniable she is an astute (albeit frequently tone deaf) business woman, who has made a living from her body and her ability to modify it.

For better or worse, she has altered the nature of celebrity and, along with her sisters, has reshaped American beauty ideals.

Of course, she is also a billionaire: one of the only women in the world with the financial means and cultural capital to acquire the rights to wear such a gown – extracted from its usual home in a temperature-controlled vault.

Other commentary decried the extravagance of the Met Gala itself. These familiar dissenting voices were perhaps louder than ever this year, as the event celebrated the so-called Gilded Age in American history (1870-1900) at a moment when political, economic, environmental and health crises the world over continue to proliferate.

However, that is the joy of fashion. It reminds us that, regardless of our differences, we are all bodies wrapped in garments. So, as women’s rights are brutally peeled back across the United States, I couldn’t help but revel in the extreme extravagance for a moment and savour this elaborate celebration of an iconic American woman.

Harriette Richards is a Research Associate, Cultural Studies, at the University of Melbourne

Rouble firms past 63 vs dollar in Moscow, hits fresh 5-year high vs euro