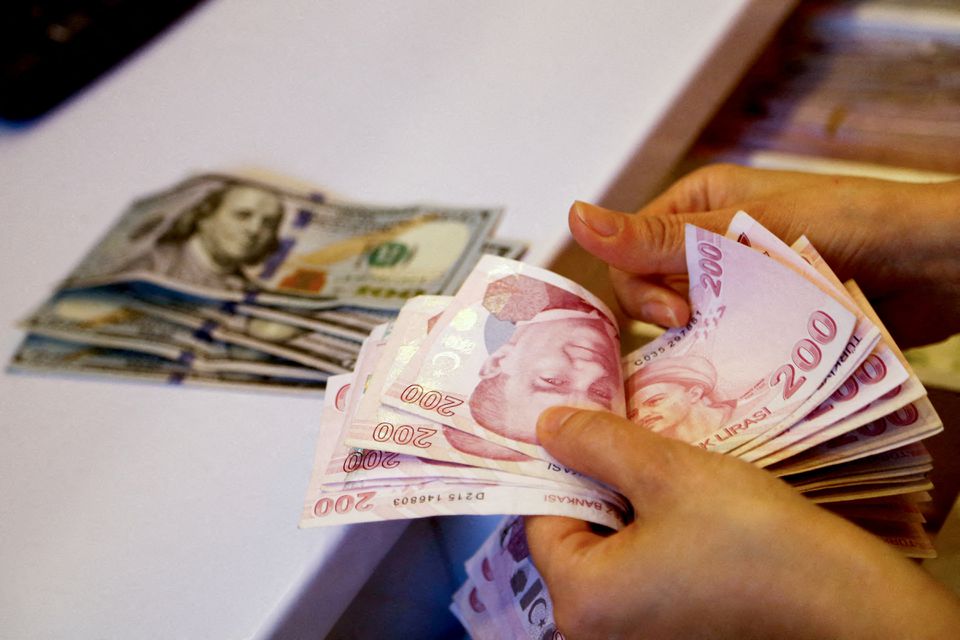 A six-day slide in Turkey’s lira has left traders predicting that authorities are now targeting a new level, as weak as 15.5 to the dollar, in a months-long effort to stabilise the exchange rate using its depleted reserves together with other measures.

Four Turkish traders said the central bank has likely set a new trading band of 15 to 15.5, allowing some depreciation in the face of a global flight to the dollar and to relieve pressure on the bank’s dwindling foreign reserves.

One bank trader said more depreciation would be allowed so that the lira remains between 15.5 and 16 to the dollar, which has risen as the US Federal Reserve raises interest rates to head off inflation, hurting emerging markets.

The lira has returned to lows last hit in late December, after a series of unorthodox interest rate cuts sparked a currency crisis that rattled the economy.

Given that the central bank’s reserves are actually negative when swaps are accounted for, traders said lira weakening was necessary if the bank plans to keep trying to steady the exchange rate as it has done since the December crisis.

“If the government sets a firm level in exchange rates without taking into account international developments, the reserves cost will be massive. The exchange rate cannot sit at a certain level for long with negative reserves,” a senior banker told Reuters.

“Even though we do not think this policy is right, we see the lira’s recent weakening as a necessity. Otherwise, it could have gotten out of control.”

The central bank’s forex reserves have dropped sharply in recent years, most recently due to billions of dollars the bank sold in market interventions to stem the crisis, only some of which were announced publicly.

The bank’s net foreign reserves were $17 billion at the end of April.

The central bank says the exchange rate is determined by the market. But bankers’ calculations show central bank reserves are not rising as much as they should given rules such as the requirement for exporters to sell 40 per cent of their hard currency profits to the central bank, suggesting the bank is still intervening.

Investors describe the FX rate as a “government-controlled” regime. Many say it cannot last in the long run given Turkey’s inflation and current account deficit have soared, and funds are fleeing emerging markets in general.

Still, the currency has been notably stable this year, apart from just after Russia’s invasion of Ukraine, which sent Turkey’s energy import costs soaring.

In its latest stabilising effort, authorities asked banks to carry out trades with corporate clients between 10 a.m. (0700 GMT) and 4 p.m. (1300 GMT) when the market is most liquid to help avoid price swings, Reuters reported this week.

At the height of the December crisis the lira touched 18.4 to the dollar, leading the central bank to intervene and the government to announce measures including a scheme to protect lira deposits against depreciation.

How N.Korea’s COVID-19 outbreak could ignite a major health crisis