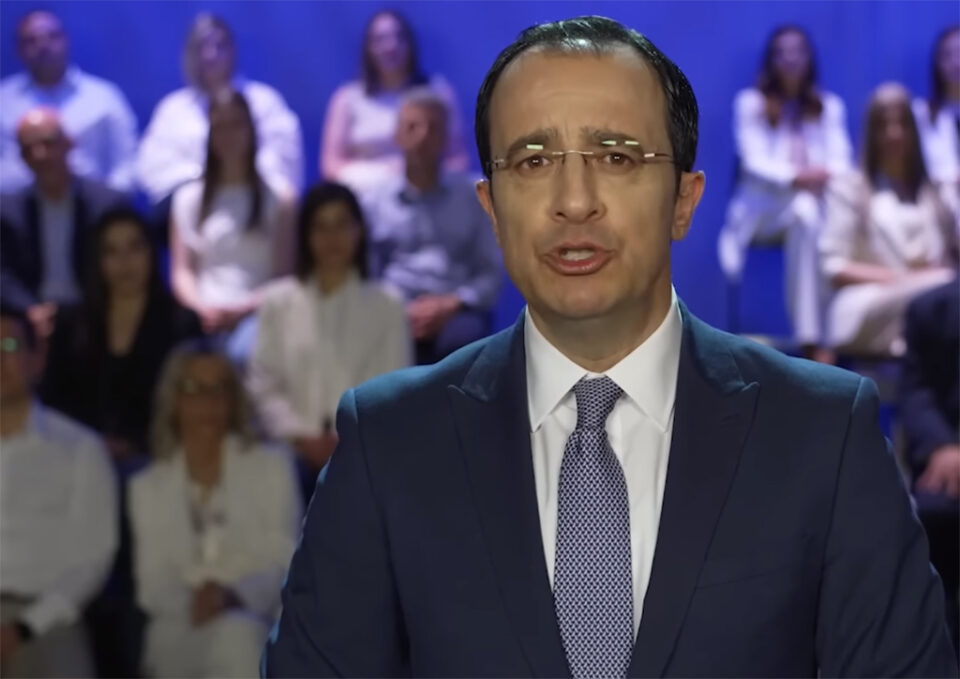 No sooner had ex-foreign minister Nikos Christodoulides thrown his hat in the 2023 presidential race than he took a drubbing from almost all sides of the political spectrum.

Critics hauled him over the coals for posing as an ‘independent’ despite his longstanding association with ruling Disy. Intellectually, the former chief diplomat is clearly trying to square the circle – but it’s likewise clear that he has his alma mater party spooked.

Doing the media rounds on Friday – a day after announcing his candidacy in a made-for-the Internet promo featuring all the bells and whistles – Christodoulides was grilled about the apparent paradox of his ‘independent candidate’ tag.

On Politis radio, the journalist was having none of his shtick, asking him point-blank how he could portray himself as a maverick when for the past nine years he’s been a member of the Anastasiades administration.

Unfazed, and without skipping a beat, he reiterated he’d remain a Disy cadre and would not ask to be struck from the party register.

Pushing his ‘independent’ credentials, Christodoulides positioned himself as something of a reformer. On the Anastasiades administration – which he insisted he was not denouncing – he said it had a mixed track record. In some areas it had done well, in others not. In effect, his sales pitch was this: he would ‘tweak’ whatever needed improving.

The interviewer came back: “But where were you for nine years when this fiesta was going on with the golden passports?”

The Geroskipou, Paphos-born politician replied that his ministry had nothing to do with the controversial – and now defunct – citizenship-via-investment scheme.

“But you sat on the cabinet which had the final say on the citizenships awarded. So how did you react at the time to the corruption as reported in the media?”

His answer: the government terminated the passport scheme.

Regardless of rhetoric, Christodoulides’ candidacy has the potential to split the Disy grass roots – perhaps explaining the vitriol coming from the ruling party, where many see him as a traitor for running against Averof Neophytou.

Not pulling any punches, Disy MP and former finance minister Harris Georgiades told the Sigma channel straight up that his former colleague Christodoulides, rather than being independent, is Diko’s man for the 2023 elections.

Georgiades pointed out the symbolism in the timing of Christodoulides’ announcement – May 12. As it happens, May 12, 1976 is the date on which the Diko party was founded.

“Mr Christodoulides will be Diko’s candidate. They have agreed with Diko. He has been electioneering since the autumn. But only now has he officially announced [his candidacy], now that an agreement has been sewn up with Diko.”

Georgiades went on: “It’s a matter of political credibility… you cannot be a member, a participant, a voice for the Anastasiades government until yesterday, and then overnight – in order to satisfy your own ambition – stand as a candidate for the opposition.”

The Twitter sphere was also aflutter about Christodoulides’ move, with flak coming from the Disy-affiliated lawyer Chris Triantafyllides.

Triantafyllides recalled that the late Alecos Markides – also a Disy cadre – ran as an independent in the 2003 elections against his party, but asked to be disbarred from Disy before doing so.

“If Mr Christodoulides remains a member of Disy… this confirms that (a) he is not independent (since he has a party identity) and (b) his announcement amounts to apostasy and divisiveness, the only incentive being personal gain.”

“He should – even though he tried to avoid it – account for the government’s track record, and then say what he intends to change,” said Akel MP Giorgos Loukaides.

Diko, however, had a far softer stance. Asked to comment about Christodoulides’ move, senior party cadre Athos Antoniades said “everyone has the right” to run for president.

Antoniades said the “internal dialogue” within Diko about the elections is ongoing. On Christodoulides specifically, “this will give us the opportunity to discuss with him, and officially as well, the prospect of a possible collaboration… we will hear his views and there it will become apparent if there is room for convergence.”

In his nearly 25-minute promotional clip, under the slogan ‘Strength that unites us’, Christodoulides rifled off one soundbite after another – “A rendezvous with history”; “The recipes of the past are no longer useful”; “It is time we stood by and among our fellow citizens”; “I envision a Cyprus that plays a starring role, a country that provides safety to all.”

But one stood out – “I am not interested, nor do I wish, to establish a party.”

This, some speculate, may be a sop to Diko or other smaller players on the party scene, allaying any concerns they may have that he might use his popular support to ‘swallow’ them up.

According to one poll published in November, Christodoulides was by far the most popular candidate, with almost one in three respondents – 32.2 per cent –picking him as the most suitable to take over the country’s presidency.

At the time Diko leader Nicolas Papadopoulos garnered 10.9 per cent, Disy leader Neophytou 7.1 per cent, and attorney Achilleas Demetriades at 6.1 per cent.

That was before anyone had announced their candidacy, so the landscape today is different. But the survey did provide a snapshot of Christodoulides’ popularity, especially among younger age groups.