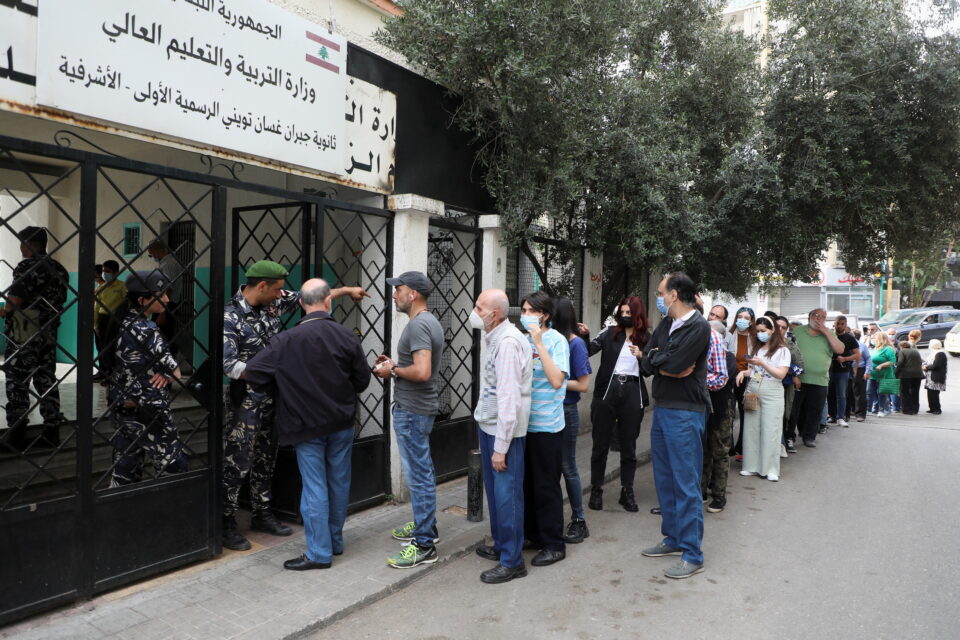 People queue up at a polling station, on the day of the Lebanese parliamentary election, in Ashrafieh

Lebanese voted on Sunday in the first parliamentary election since the country’s economic collapse, with many saying they hoped to deal a blow to ruling politicians they blame for the crisis even if the odds of major change appear slim.

The election is seen as a test of whether the heavily armed, Iran-backed Hezbollah and its allies can keep their assembly majority amid soaring poverty and anger at parties in power.

Since Lebanon last voted in 2018 it has suffered an economic meltdown that the World Bank says was orchestrated by the ruling class, and a massive explosion at Beirut’s port in 2020.

But while analysts believe public anger could help reform-minded candidates win some seats, expectations are low for a big shift in the balance of power, with the sectarian political system skewed in favour of established parties. Read full story

“It’s not my right, it’s my duty – and I think it makes a difference. There’s been an awakening by the people. Too little too late? Maybe, but people feel change is necessary.”

The meltdown has marked Lebanon’s most destabilising crisis since the 1975-90 civil war, sinking the currency by more than 90%, plunging three-quarters of the population into poverty, and freezing savers out of bank deposits.

In a symptom of the collapse, polling stations across the country suffered power cuts on Sunday.

In southern Lebanon, a political stronghold for the Shi’ite Hezbollah movement, Rana Gharib said she had lost her money in the financial collapse, but was still voting for the group.

“We vote for an ideology, not for money,” said Gharib, a woman in her thirties who was casting her vote in the village of Yater, crediting Hezbollah for driving Israeli forces from southern Lebanon in 2000.

Fistfights and other disputes disrupted voting in several districts, according to the state-run news agency, with security forces intervening so it could resume. Interior Minister Bassam Mawlawi said incidents remained “at an acceptable level.”

Tensions were particularly high between Hezbollah and the Lebanese Forces, a Saudi-aligned Christian party.

The LF is vehemently opposed to Hezbollah’s arsenal of weapons and tried to run Shi’ite candidates in Hezbollah-dominated areas, although most withdrew before Sunday.

The LF said Hezbollah supporters had attacked their delegates at several polling stations, leaving at least four wounded in the southern district of Jezzine.

A Hezbollah official said the group had no presence in Jezzine and a statement by the party later blamed the LF for starting clashes in other districts.

The last vote in 2018 saw Hezbollah and its allies – including President Michel Aoun’s Free Patriotic Movement (FPM), a Christian party – win 71 out of parliament’s 128 seats.

Those results pulled Lebanon deeper into the orbit of Shi’ite Muslim-led Iran, marking a blow to the influence of Sunni Muslim-led Saudi Arabia.

Hezbollah has said it expects few changes from the make-up of the current parliament, although its opponents, including the LF, hope to scoop up seats from the FPM. Read full story

Adding a note of uncertainty, a boycott by Sunni leader Saad al-Hariri has left a vacuum that both Hezbollah allies and opponents are seeking to fill.

In Hariri’s main stronghold in Beirut, residents skipped voting and instead took time out to relax, some going swimming.

Polls are set to close at 7:00 p.m. (1600 GMT) and unofficial results due in overnight. Two hours ahead of polls closing, the interior ministry announced a 32% voter turnout.

By comparison, the expatriate vote which took place last week saw a turnout over 60%. Analysts are already expecting the outcome to face a slew of objections, especially in districts where newcomers are taking on established parties.

“Where competition is fierce and where the electoral threshold is something opposition parties can overcome, we’re going to see a lot of disputes,” said elections expert Amal Hamdan.

The next parliament must nominate a prime minister to form a cabinet – a process that can take months. Any delay would hold up reforms that are needed to address the crisis and unlock support from the International Monetary Fund and donor states.

Prime Minister Najib Mikati, who clinched a draft IMF deal in April, conditional on reforms, has said he would be ready to return as premier if he was sure of a quick cabinet formation.

Part of clubhouse in Xylofagou collapses, no injuries