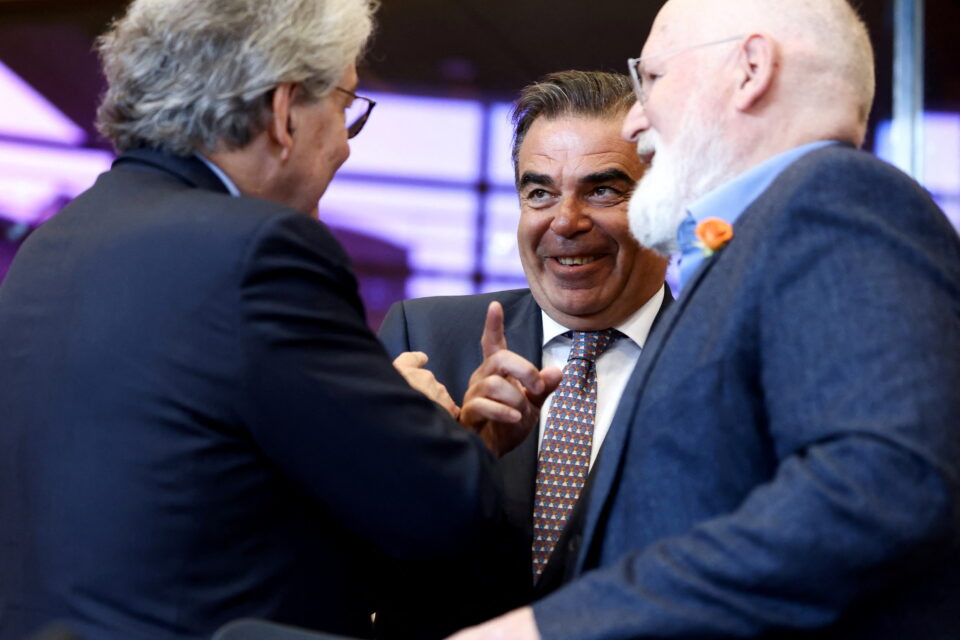 It was no surprise that the political parties and the nationalist media completely ignored a warning by the Vice President of the European Commission Margaritis Schinas about the possibility of Russian interference in next year’s presidential elections in Cyprus. Moscow meddling in our politics is something the parties and media see nothing wrong with.

Parties that issue fiery statements to condemn the expression of any view by a Western official about Cyprus, therefore, did not deem the warning of the Commission’s vice president worthy of a comment, not even to dismiss it as untrue. They just pretended they did not hear it, rather than have to take a stand against Russia, which would be politically unacceptable.

During his speech at the New Democracy Party congress in Athens last Sunday, Schinas, addressing Disy leader Averof Neophytou by name, who was present, said, “I want you to know that we will not let them play games in Cyprus, in the elections for the president of Cyprus.” This assertion followed a broadside against Russia, a country which “kills civilians and makes them homeless, those who bomb Orthodox churches and monasteries, those who plunder archaeological treasures.”

Foreign Minister Ioannis Kasoulides was quite blasé when asked about this comment by a radio interviewer on Monday. He said that what Schinas said was conjecture, but also acknowledged the interference of Russia in the 2016 US presidential elections. “They also interfered elsewhere, it is not something new, so it does not surprise me,” Kasoulides said.

Perhaps, the reason the political parties said nothing was because Russian interference in Cyprus politics is not covert, as it has been in other countries. It is done openly because the majority of the Cyprus political establishment has been in thrall to Moscow since the Cold War, and is proud of it. The reason for this is the laughable claim that Russia takes a ‘perennially principled stand on the Cyprus problem.’ This myth makes it acceptable for Cypriot politicians to openly promote Russian interests in Cyprus.

Retired party leader Giorgos Lillikas a few years ago publicly demanded offering a military base to Russia, seconded by Edek chief Marinos Sizopoulos. Three party leaders visited Russia when it was under sanctions for the annexation of Crimea (Lillikas, Eleni Theocharous and Andros Kyprianou), while in 2015 the legislature approved a resolution opposing the imposition of sanctions against Russia over Crimea and urging the government to pursue their lifting! Even at the EU, the Anastasiades government frequently took Russia’s side, as did Demetris Christofias, without ever provoking the mildest criticism at home.

Sadly, it is not only the politicians that display this dependence. The release of emails a few years ago showed the attorney-general’s office acting like a subsidiary of the Moscow prosecutor’s office, pulling out all the stops to extradite Russian nationals to Russia, regardless of the fact that most requests were politically-motivated, targeting opponents of the regime. When we add the much-publicised issuing of EU passports to Russian plutocrats, the picture of the Republic is anything but flattering.

How all this is viewed by Brussels should concern us. Schinas’ comment probably reflected the Commission’s position on the influence wielded by Russia in Cyprus, especially now that relations between the EU and Moscow are at their lowest point ever. The suspicion with which Cyprus was viewed by Brussels will have increased in current conditions as would the resolve to deal with these problematic links that serve Moscow’s disruptive agenda. Cyprus has gone along with the EU sanctions, but we doubt this is enough.

Now, there are fears in Brussels that Russia would try to influence the presidential elections. It would not even have to do so covertly, because the political establishment does not object to Russian meddling in domestic politics. Russia’s long-standing ambassador on the island expresses his views on local issues, of interest to his country, very openly, sometimes in the form of diktats, without raising a stir. In the elections, Russia would be more careful, but it has the power and clout to influence things.

How could the Commission stop it? How could it ensure it is not pouring money into a candidate’s campaign fund or securing the backing of media, which is not unheard of, for a specific candidate? The irony is that if a candidate is exposed for having Moscow’s backing it would boost rather than harm his election prospects. Under the circumstances, Schinas’ assertion, in the above-mentioned speech, that “Cyprus will remain European and Western,” seems more a case of wishful thinking than something based on facts on the ground.

Tales from the coffeeshop: Dreamer is all things to all people