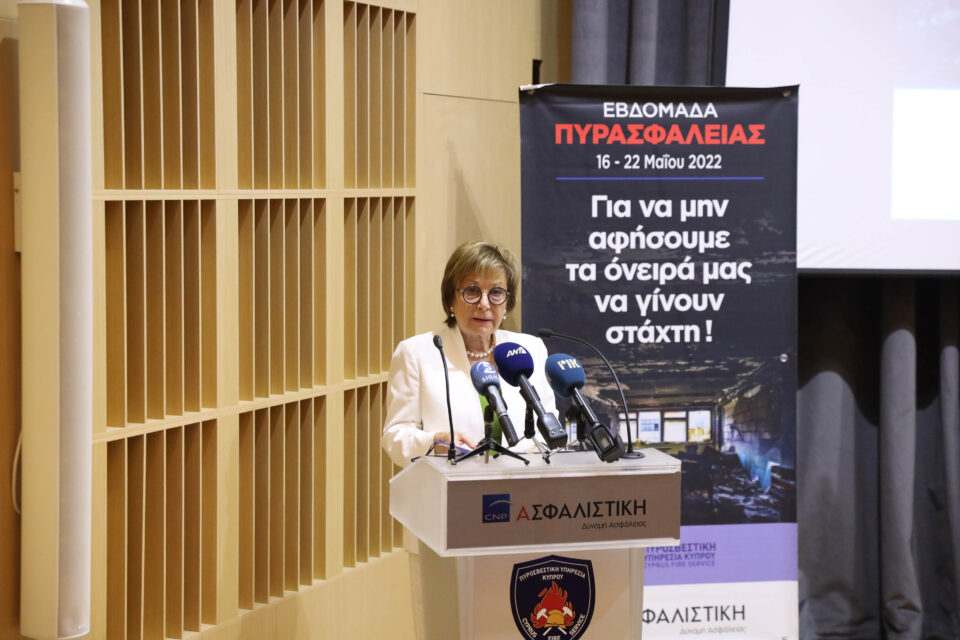 The goal of this week’s fire safety week is to raise public awareness about the dangers of fires in both rural and urban areas, Justice Minister Steffie Drakou said on Monday kicking off the initiative.

“Respect for human life, protection of our property and care for the protection of nature from the catastrophic consequences of fires is the responsibility of all,” she said.

The minister said the government is actively strengthening the island’s fire safety by taking decisions and by continuously evaluating the department’s fire fighting capacity. In addition, because of last year’s catastrophic fire in the mountain communities of Larnaca and Limassol, a package of measures aimed at further strengthening the department’s operational readiness in dealing with fires has also been adopted.

“Among other actions taken, was the conduction of a study on the introduction of a surveillance system that will provide real-time monitoring capacity during the breaking and development of a fire and will help to improve the coordination of all services involved in the operation,” she said.

The study has now been completed and the implementation of the system in two phases is in the pipeline. The first phase concerns making available the equipment and services before the high-risk season to the fire brigade, that will cost more than €4 million, the minister said.

At the same time, the House has been looking into a legislation seeking to enhance fire safety, training, coordination and accident prevention for volunteer firefighters while last September the law providing for the autonomy of the fire department came into effect.

“The autonomy of the fire department is expected to provide more functionality, flexibility, efficiency, and further impetus towards executing its mission and strategic objectives,” the minister said.

Moreover, considering the stress on the firefighting infrastructure, the development of new fire stations and the upgrading of older stations in both urban and rural areas is also going ahead. At the same time, the construction of a helipad in Linou that will contribute to firefighting and search and rescue operations in the wider area of Troodos is currently in the works.

The ministry is also in the process of creating a significant number of new positions that will be covered by the 2023 fire service budget, according to the minister.

“Despite the efforts from the state and organisations such as CNP insurance, fire protection remains everyone’s business. The means and the planning by the competent authorities is not enough. I advise all citizens to be extra careful, especially during the summer months… and invite you to participate in fire fighting efforts by reporting smokes or fires at 112 or 1407,” the minister concluded.

The cost of last year’s fires amounted to the loss of four lives, incalculable damage to the environment and up to €30 million in damages. Fire Safety week runs from May 16 to May 22.