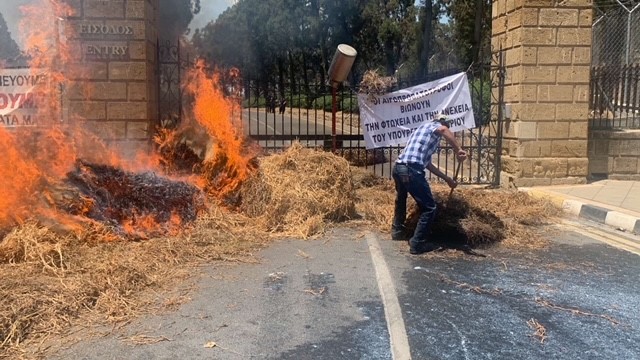 President Nicos Anastasiades on Thursday said he would not tolerate any violation of the provisions regarding the halloumi PDO, as three men were arrested following a protest on the issue by livestock breeders where they lit fires outside the presidential palace.

The arrests concern a 42-year-old man who was located a few minutes before midnight on Wednesday and two men, aged 45 and 55, who were arrested on Thursday.

They all face charges related to conspiracy to commit a crime, setting fire, reckless and dangerous acts and causing malicious damage among others.

Police spokesman Christos Andreou told the Cyprus Mail that police are examining video material from the protest on the handling of Halloumi PDO and it is possible more arrest warrants will be issued.

“There were many people at the protest, but the damage was done by five or six people,” he said.

Anastasiades, who did not appear to talk to the farmers the previous day, was asked by journalists on Thursday whether he was disturbed by the protest. He responded there was “no disturbance” with the fact that people expressed their demands but only in the way they chose to do so.

“If there is even a disturbance it is the manners of behaviour,” he said.

During the demonstration on Wednesday, which started at noon and continued until the afternoon, livestock breeders set fire to hay bales, dumped gallons of milk and blocked roads outside the presidential palace and other key traffic arteries.

Tensions peaked as the driver of a truck seemingly threatened to smash through the gates to the presidential palace, halting just inches away as police in riot gear stood their ground.

Later in the day, demonstrators made their way to the agriculture ministry where a number of protesters were admitted to discuss their grievances.

Anastasiades said they would be “absolute and strict” in the checks that must be carried out to ensure the conditions are followed as stipulated by the relevant protocol.

“I will not tolerate any violation of the provisions or the conditions that must distinguish the manufacture of halloumi,” he said.

However, he stressed the government should not be held accountable for some people’s refusal to implement their obligations.

Next week a meeting will be held with the cheese makers “so that they realise that they cannot speculate at the expense of the suppliers or especially the sheep and goat farmers.

“They will have to bear in mind that there will be strict controls on the involvement of sheep and goat milk in the manufacture of halloumi,” he added.

Speaking on Trito radio earlier in the day, Agriculture Minister Costas Kadis said the farmers should have protested against the cheese producers and not outside the presidential palace as they are the ones underpaying goat and sheep farmers for their milk.

Milk production costs for sheep and goat farmers are close to €1.50 per litre, but milk is sold at €1.10 per litre, he said.

Kadis explained how the price of milk is set by the cheese makers instead of the producers. “Some people want it all for themselves,” he noted.

The reason why cheese makers keep the price of milk low is to put pressure on them to satisfy their demands for specific changes in the file on halloumi, which, the Minister said, are unrealistic.

For his part, the president of the Pancyprian association of sheep and goat Farmers Panayiotis Constantinou, complained that cheese makers consult with each other to maintain the price they pay for the milk low.

He added that in many cases, instead of buying the milk straight from the farmers, cheese makers buy and sell it among themselves.

Meanwhile, the financial aid given by the state does not solve the problem, he said.

Constantinou stressed that it is necessary to implement the relevant laws and the need to carry out checks on the amount of milk used by cheese makers in the production of halloumi.

The possibility of dodgy practices by cheese producers will be examined by the commission for the protection of competition. The head of the commission, Loukia Christodoulou told the same radio station that she has no data on the case.