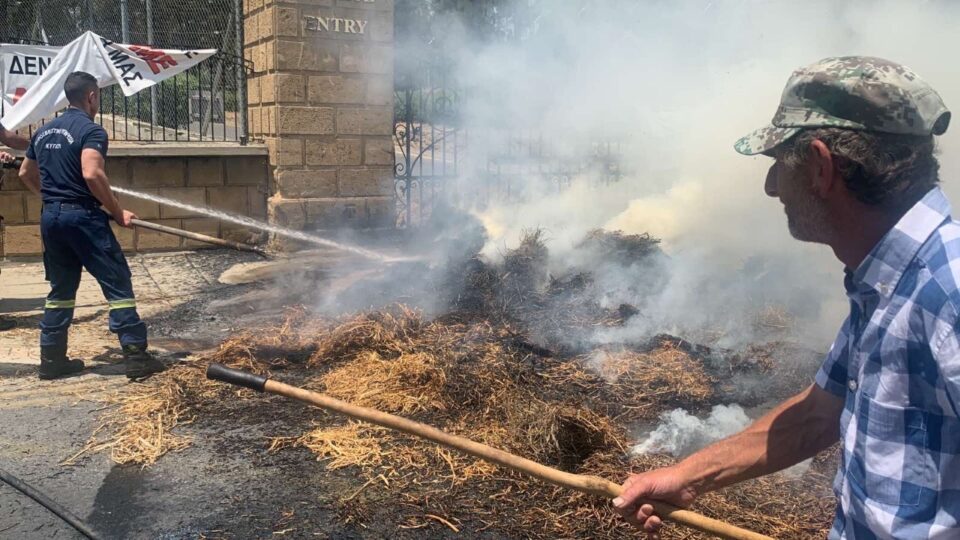 The demo outside the palace on Wednesday

Cheese makers on Friday again clashed with the government, saying the agriculture minister is “adding fuel to the fire” by saying goat and sheep farmers should have protested against them and not the state over the implementation of the halloumi PDO.

In a written statement, the cheese makers’ association accused Agriculture Minister Costas Kadis of insulting them with his “unfortunate and misleading” statements.

Instead, the minister should be taking responsibility for the “failed management” of the PDO, they said, adding they “fully understand” the protests and demands of dairy farmers.

In light of an upcoming meeting with the president, the cheese makers called on the minister to submit a proposal that will satisfy all the parties involved in halloumi production “so that not a single litre of milk is left unused and not a single kilo of halloumi is lost”.

The aim must be to protect halloumi as our national product, they said, in addition to its “exports, thousands of jobs and all those who depend on it directly or indirectly”.

Responding to reports about the use of milk powder in halloumi production, the cheese producers urged authorities to proceed with strict checks and impose severe penalties on anyone found infringing the regulations.

Speaking on Trito radio, head of the cheese makers’ association Giorgos Petrou earlier in the day also called on anyone with such evidence to come forward so the company be expelled from the association.

Petrou referred to 13 mistakes made while adopting the procedures for halloumi production, saying the biggest was the required percentage of sheep and goat milk, currently at 20 per cent.

Under the halloumi PDO, 51 per cent of the milk used in halloumi must be from goats or sheep by 2024.

But the farmers say producers are not strictly abiding by that and have called for strict checks by the relevant authorities. This was one of their main demands at a protest on Wednesday outside the presidential palace.

He said there are “specific complaints” and that everyone must comply with the laws.

Meanwhile, Kadis had said the farmers should have protested against the cheese producers and not outside the presidential palace as they are the ones underpaying goat and sheep farmers for their milk.

Milk production costs for sheep and goat farmers are close to €1.50 per litre, but milk is sold at €1.10 per litre, he said, explaining how the price of milk is set by the cheese makers instead of dairy farmers.

“Some people want it all for themselves,” he said.

The reason why cheese makers keep the price of milk low is to put pressure on for their demands for specific changes in the halloumi file to be met, which, the minister said, are unrealistic.

During the farmers’ protest livestock breeders spilled gallons of milk outside the presidential palace as well as setting fire to a bale of hay. A truck driver also threatened to smash through the gates of the palace before police stopped him.

The farmers continued demonstrating outside the agriculture ministry cutting of key traffic arteries in the afternoon.

Last year, the Cyprus cheese producers association and 11 other applicants filed an application against the European Commission seeking to annul the implementation of the regulation entering ‘halloumi/hellim’ in the register of protected designations of origin and protected geographical indications.

Their main objection relates to the type of milk used, saying more cow’s milk should be used as Europeans “prefer the gentler, creamier taste of halloumi made from cow’s milk”.

According to the cheese makers association, the cheese production sector employs 15,000 people and absorbs 100 per cent of the available milk, supporting Cyprus’ agricultural and livestock industry.