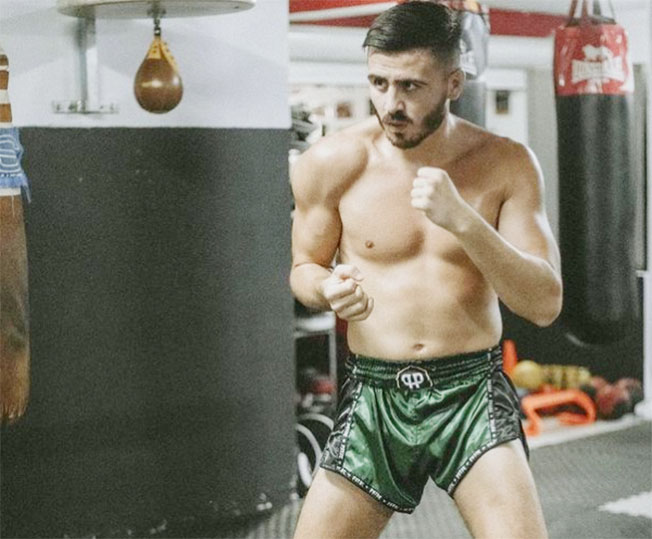 By Lance Fernandez
Savvas Michael doesn’t mind being the dark horse in the upcoming ONE Flyweight Muay Thai World Grand Prix. Instead, he’s relishing the opportunity to impress fans across the globe.

On 20 May, the Cypriot athlete will face Amir Naseri in the tournament quarterfinals at ONE 157: Petchmorakot vs. Vienot. With a victory, he would move closer to the coveted silver belt and show that he deserves to compete in the most prestigious all-striking tournament on the planet.

The 23-year-old has already earned his fair share of accolades in Muay Thai, winning both the WBC Muay Thai Lightweight and WMC Muay Thai 130-pound world titles.
Despite those triumphs, Michael still hasn’t proven himself against the best strikers in ONE Super Series. So when he enters the eight-man Grand Prix on Saturday, that will be his motivating force.

The ‘Baby Face Killer’ said: “Oh, I love [being the dark horse]. It’s my gas every morning. I’m working two times harder than everyone. I love being kept in the dark. I don’t care about the spotlight.
“I like feeling this pressure. It’s what makes me perform even better. Honestly, I don’t even think about it. I’m just focused on trying to beat myself yesterday.”

At ONE 157, Michael can make an immediate statement in the tournament when he battles an elite opponent in Naseri.
The Iranian-Malaysian striker currently trains at Tiger Muay Thai with Thailand’s Western clinch maestro, Jonny Betts, and #4-ranked ONE bantamweight MMA contender Fabricio ‘Wonder Boy’ Andrade. He’s also a former Omnoi Stadium Champion and has competed against the legendary Saenchai.

But while beating the dangerous ONE Championship newcomer won’t be easy, Michael believes Naseri’s aggressive style could actually lead to his downfall.
Michael said:

“Sometimes he opens up without realising, and it’s just a bad habit. When you have bad habits, they never go away. So I’ll exploit his bad habits, and I’m going to be there meeting him in his face.”

For his part, the Cypriot fighter will aim to make Naseri pay with his high-level punching power and footwork.
Beyond showcasing those talents, Michael wants to make sure spectators witness something special when they tune in to watch his quarter-final clash.

He said: “I’m willing to die to win this tournament. And when the cage locks on 20 May, that moment will be the culmination of all I’ve been working for, practically all my life. I’m willing to give everything in that cage, and I promise not to disappoint.”

If not for his mother’s sacrifices, Michael might not be where he is today. Ever since he started training, she was his biggest supporter, working multiple jobs just to pay for his overseas competitions.

Winning the ONE Flyweight Muay Thai World Grand Prix – never mind the potential US$50,000 performance bonuses – would be an incredible way for Michael to repay his number one fan.
Moreover, claiming the silver belt would make all his own tough sacrifices worth their weight.

“I started my career when I was 6 years old. I’m 23 years old now, and reaching the top has always been part of my goals. Since I was 10 years old, I’ve been running in the dark before school. At 5 a.m., I’d put my headphones on, and I’d imagine being in a big fight,” he said.

“Being here now is a blessing. I’ve been working in the dark for many years, and I am ready for this. That’s why I’m ready to give a statement [performance].”

Michael may be ready to perform under the bright lights of the Singapore Indoor Stadium, but so are the other seven tournament combatants, including Naseri.

Still, the striker from Cyprus believes he wants to win this Grand Prix more than anyone. He’ll focus on being the better man in the quarter-finals, and if he emerges victorious, he’ll carry that mindset into the next round.

He hopes that attitude will ultimately propel him to the biggest moment of his professional career, showing himself – and the next generation – that anything is possible.
He added: “It’s the biggest tournament I have ever seen, and I’m a part of it. Winning at ONE fulfills my dream. The WBC title was just an accomplishment. It’s just another title. But by winning the Muay Thai Grand Prix, I would be considered the best striker [in my weight class] worldwide.

“I got to prove to my younger self and the young ones who are training hard now that we can do it. This is a battle within myself, and I’ve got a dream in my heart. I’m willing to die for this competition because it means the world to me.”