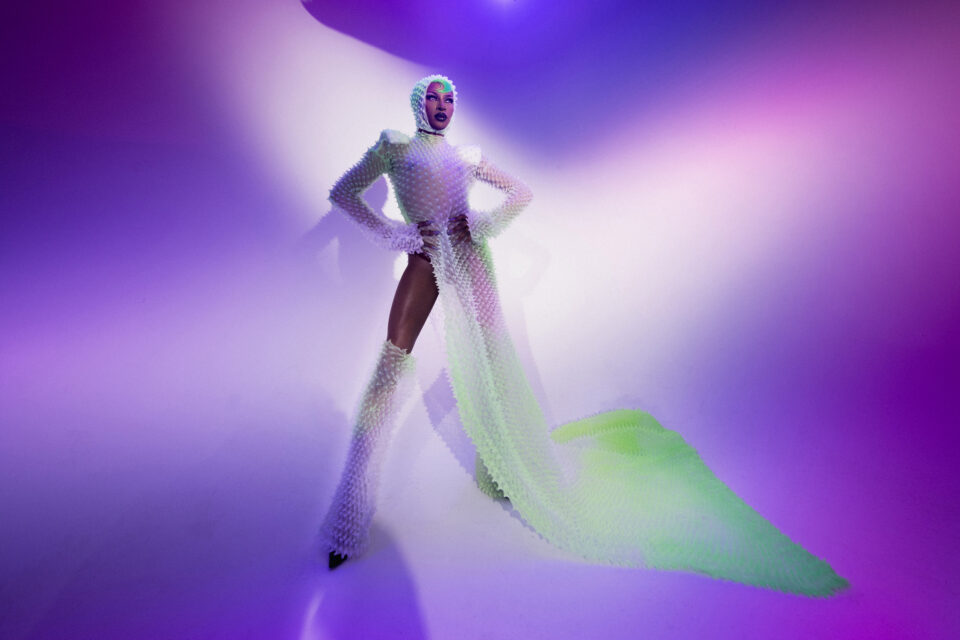 Tayce was always destined to be a fashion icon.

The drag queen – who found fame as a runner-up on the second season of RuPaul’s Drag Race UK in 2021 – became obsessed with style at an early age, and has been putting together looks for years.

“It’s second nature to me – I’ve always loved fashion,” says the Welsh queen, who speaks at a million miles an hour, her words dripping with enthusiasm. “Ever since I was a kid – four years old I would go to McDonald’s once a week as my weekly treat from mum and dad, and I would be wearing all sorts of crazy things.

“I remember having this outfit. Every time I would go to my grandma’s, I would steal all her s*** – brooches from her jewellery boxes, all these sashes and scarves. I would make a skirt out of one scarf wrapped around my waist, and all the other scarves pulled through it, like a little hula vibe.” Topped off with a feather boa fashioned into a top, and Tayce’s look was complete.

“That’s the thing, you can do anything as long as you don’t give a f***,” Tayce adds. “I’ve had New Year’s Eves where I’ve gone out literally in a bin bag.”

This is just scratching the surface of Tayce’s happy fashion memories. The queen – who doesn’t mind what pronouns you refer to her by (“he, she, cat, cow, pegasus – honestly, you can call me whatever you want”) – warms to the theme, asking: “Do you remember when Lady Gaga was obsessed with the Noritaka Tatehana heels? [Vertiginous platform shoes designed with no heel.]

“I had these old crusty, musty, kooky, spooky, babadookie Doc Martens, and I had these Thomas The Tank Engine, A1 size, tiny little square books from when I was a baby. I stacked them all, wrapped them in tape and stuck them on the front of a shoe and made my own janky heeled shoe. It was gorgeous, but actually it was really ugly.”

She also reminisces about getting crafty at school, saying: “I would buy these science goggles from eBay, a tenner for a pack of 50, and cover them in pennies, rhinestones, pencils, paint, bin bags, balloons – all this stupid s***, and I would sell it in school for a tenner.”

Tayce credits these early beginnings with the “hustling mentality” she still has today – but things have somewhat changed on the fashion front.

“I’m definitely less crafty now than I was,” she admits. “I’m somewhere else moneywise than I was before – I can now go out and actually buy the things I’ve always admired”.

Since Drag Race, Tayce has well and truly made her name in fashion – she’s signed to the same modelling agency as Naomi Campbell, walked for Tommy Hilfiger at the Fashion Awards, and modelled for Jean Paul Gaultier.

The budget might be a bit bigger now, but Tayce still finds her style difficult to pin down – and that’s exactly how she likes it. “My fashion sense is all over the place,” she muses. “I just like what I like in the moment. So right now I’m in a head-to-toe Balenciaga tracksuit, slouchy as hell, and that’s what I’m loving today.”

But gender is certainly something that doesn’t influence Tayce’s fashion, and whether she’s in or out of drag doesn’t have a huge influence on her wardrobe.

“I don’t really see gender anymore – and who does? It’s so 2005. I could be out right now, having a meeting, wearing a Mugler suit. And if I want to go out in drag later, but still feel like wearing that – I’ll just put a face on.

“It just depends on the moment, what you feel and what you can bring to it – if you want to bring a masculine energy, a feminine energy. But honestly. I just feel like I want what I want.”

Tech plays a big part in Tayce’s latest project, where Absolut has brought her together with designer Chet Lo and digital fashion duo IoDF to create both physical and digital garments – known as Second Skin Couture.

Tayce suggests the collaboration suits her personality, saying: “I am a very off the wall, off the path kind of person – a little Grace Jones-esque, if you will.”