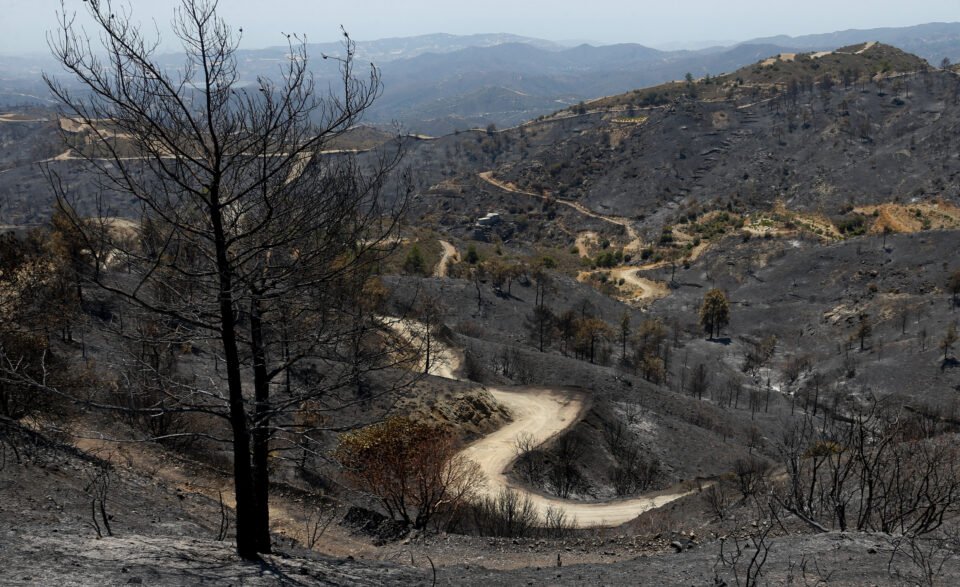 The destruction caused by the fires last July

Monday marks the start of Forest Protection Week, which will feature a series of event aimed at raising public awareness regarding the protection of forests, the forestry department said on Monday.

The initiative is also spearheaded by the agriculture ministry and the environmental department.

“We want to pass the message that every one of us is responsible for the protection of our forests,” the forestry department said on Monday.

“The memory of the tragic fire that started in Arakapas is still fresh in our minds and our goal is to prevent that to ever happen again,” it added, referring to the fire that last summer killed four people and burnt vast tracts of land in Limassol and Larnaca districts.

Throughout the week, all meetings held by local forestry stations involving local authorities and other bodies involved in fire protection, including voluntary groups, will be intensified.

Forestry department officials will distribute educational materials and inform people about the start of the new summer season and the precautionary measures to take to reduce the likelihood of forest fires taking place.

The culmination of the initiative’s activities will take place on Friday at 10.30am with a large-scale exercise simulating a fire, called Ifaistos 2002 in the village of Kapedes.

The exercise will see the national plans Ifaistos and Ikaros deployed to test their effectiveness.

“Our forests are a priceless national heritage that we must protect at all costs,” Agriculture Minister Costas Kadis said presenting the initiative at the Bank of Cyprus headquarters in Nicosia.

“Forests belong to all of us, they belong to our children, they belong to future generations. Protecting them is our responsibility. That is why we call on everyone to join in the collective effort to protect our island from fires.”

Kadis added that the forestry department’s budget has significantly increased in recent years to front the growing issue of fires across the island.

Speaking after Kadis, the head of the forestry department Charalambos Alexandrou said that throughout the past 10 years an average of 230 fires break out annually, burning around 1,800 hectares worth of forests and crops.

“Last year, the number was even higher, as we counted 310 fires, the largest number ever recorded, of which 46 per cent were deliberate.”

Alexandrou said his department is in need of additional staffing in order to better respond in case of emergencies.

Finally, environmental commissioner Klelia Vassiliou called on people not to allow negligence to turn into a natural disaster.

“There is no excuse for not knowing the risk of fires breaking out,” she said.

“It is not only a moral duty to avoid fires, but also a matter of environmental and economic importance. The loss of forest areas comes at a great cost for both aspects.”