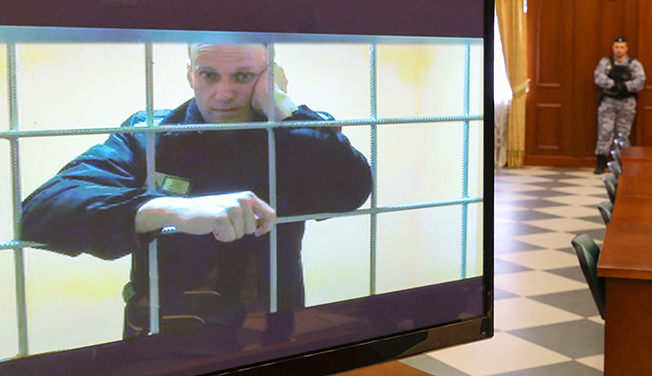 Jailed Russian opposition leader Alexei Navalny on Tuesday lambasted President Vladimir Putin, casting the Kremlin chief as a doomed madman who started a “stupid war” that was butchering the innocent people of both Ukraine and Russia.

Appealing unsuccessfully against his latest nine-year sentence, Navalny used his address to a Moscow court to deliver a stinging attack on Putin and the war – a rare public act of dissent in a country where it is a criminal offence to criticise the army and its “special military operation” in Ukraine.

Castigating Putin’s Russia as a state run by thieves and criminals, Navalny said the current leaders of Russia would ultimately be crushed by the forces of history and burn in hell for creating a bloodbath in Ukraine.

“This is a stupid war which your Putin started,” Navalny, 45, told an appeal court in Moscow via video link from a corrective penal colony. “This war was built on lies.”

“One madman has got his claws into Ukraine and I do not know what he wants to do with it – this crazy thief,” Navalny said of Putin.

Navalny, by far Russia’s most prominent opposition leader, was appealing against a nine-year jail sentence he was handed in March for fraud and contempt of court, on top of 2-1/2 years he is already serving.

He denies all the charges against him and says they were fabricated to thwart his political ambitions. His appeal was rejected by the court.

A former lawyer who rose to prominence more than a decade ago by lampooning Putin’s elite and voicing allegations of corruption on a vast scale, Navalny has long forecast Russia could face seismic political turmoil through revolt.

He earned admiration from the disparate Russian opposition for voluntarily returning to Russia in 2021 from Germany where he underwent treatment for what Western laboratory tests showed was an attempt to poison him with a nerve agent in Siberia.

On his return he was jailed. Russia denies Navalny’s claims that Russia’s secret police poisoned him with Novichok.

Navalny cast the prosecution’s “facts” as “lies” – and compared them to the lies he said Putin, Russia’s paramount leader since the last day of 1999, had used to begin the Feb. 24 invasion of Ukraine.

“What do you want to achieve – do you want short-term control, to fight with future generations, to fight for the future of Russia?” Navalny asked the court. “You will all suffer historic defeat.”

“Your time will pass,” Navalny said. “When you will all be burning in hell, your grandfathers will be adding wood to your fires.”

Putin says the “special military operation” in Ukraine is necessary to demilitarise and “denazify” the country, and because the United States was using Ukraine to threaten Russia through NATO enlargement and Moscow had to defend against the persecution of Russian-speaking people.

Ukraine and its Western allies reject these as baseless pretexts to invade a sovereign country.