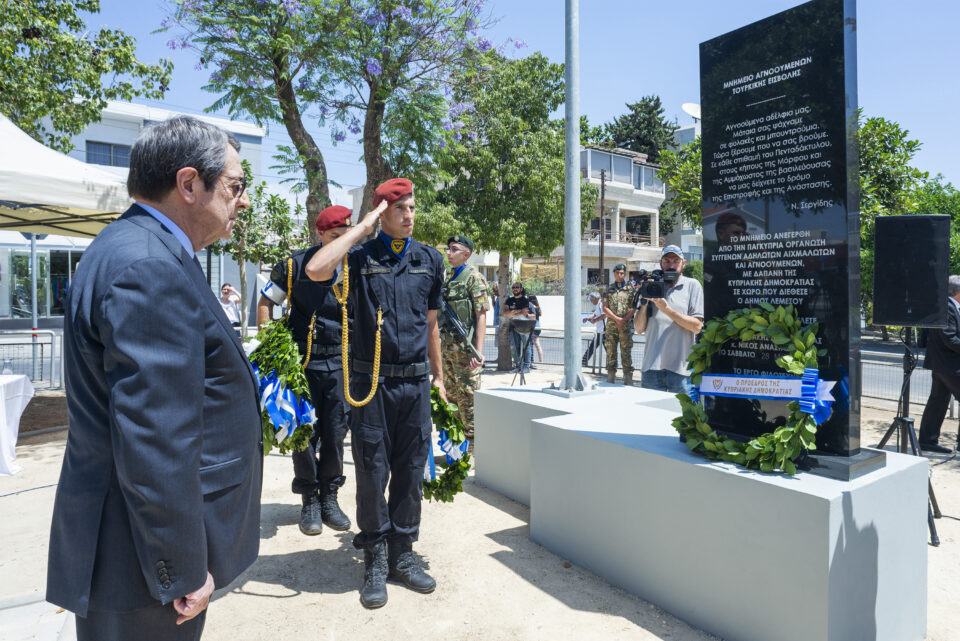 President Nicos Anastasiades a the unveiling ceremony on Saturday (PIO)

It is regrettable that Turkey remains a ‘pampered child’ for some despite its continued provocations, President Nicos Anastasiades said on Saturday, expressing the wish that the current situation in Ukraine would “stir up justice” and hold Turkey accountable for its actions.

He was speaking at the unveiling ceremony for a monument erected in the memory of 1974’s missing persons in Limassol.

“The monument is a constant reminder of the responsibility and debt we have as a state, as a people, as a nation, to determine the fate of all the missing,” he said. “Despite the investigation of a large number of cases, and despite best efforts made on our side, the fate of 775 Greek Cypriots and Greeks remains uncertain”.

This, the president said, “is mainly a result of the inhumane tactic of the occupying power to withhold information held within its archives despite the promises made to the United Nations to reveal 30 potential burial sites”.

Reaffirming the state’s support for the work of the Committee on Missing Persons (CMP), Anastasiades called on anyone with information to come forward, even anonymously.

At the same time, he stressed that “our primary demand is for the United Nations, our European family, the European Union, and the wider international community to remind Turkey of its responsibilities”.

Drawing a comparison between the invasion of Ukraine and the 1974 invasion of Cyprus, Anastasiades expressed his sympathies to the Ukrainian people, saying he hoped “the current state of affairs, no matter how unpleasant, will stir up justice that does not distinguish between sovereign and non-sovereign nations”.

Cyprus, much like Ukraine, is a sovereign nation that has been on the receiving end of a similarly barbaric and unacceptable invasion from a more powerful country, under the same pretences, he said.

“This is why we will not stop requesting to the EU, the UN Secretary general, to any international body, that it is finally time to realise that international law will prevail when we all respect it indiscriminately.

“Our side is doing everything in its power to achieve an honest solution, a just solution, a solution that will guarantee human rights, that will give the relatives of the missing the right to know the fate of their children, of their fathers, of their brothers”.

The president added that despite efforts, sacrifices and concessions to achieve peace, Turkey’s new revisionist policy is leading to a stagnation, which is particularly dangerous.

We are all witnesses to the “cunning neutrality” maintained by Turkey at this time, he said, “when all of us in Europe are taking measures, even unpleasant ones, even to the detriment of our countries’ interests.

Anastasiades said it is sad to observe that despite Turkey’s “provocative actions in the Aegean, in Cyprus, in Syria, in Libya, in Iraq, its refusal to impose sanctions, the blackmail to accept Finland or Sweden into Nato,” it continued to be treated by some like a “pampered child, for the sake of their own interests”.

“This is the reality, and the reason we are called to continue the fight”.