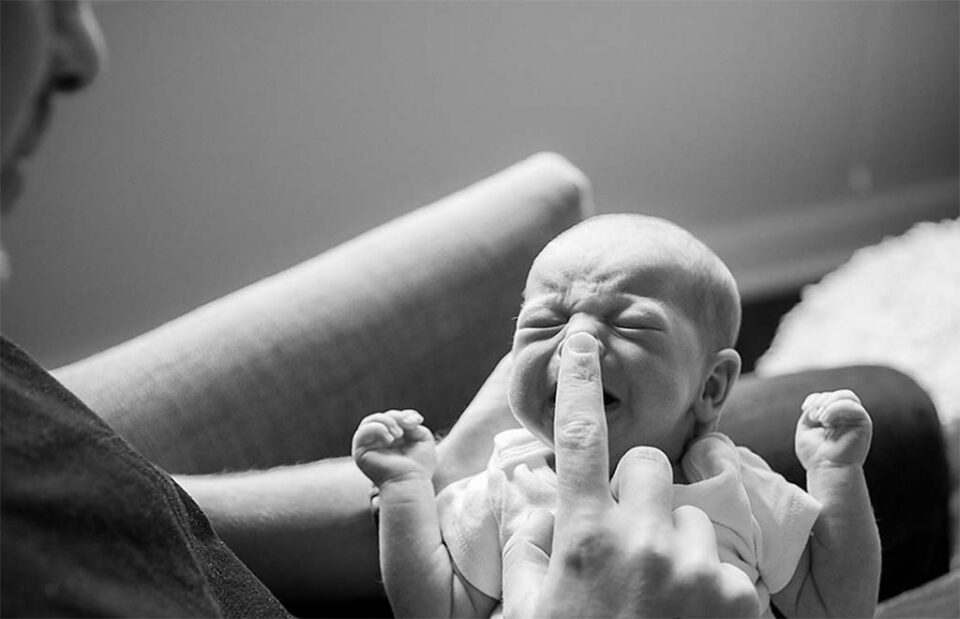 For many dads, having a child is unplanned. What happens next can vary. One man said:
We broke up and she called me soon after to tell me she was pregnant […] she just asked me if I wanted to be in our baby’s life and I accepted without thinking twice.

Another said:
I wanted to have an abortion, since we weren’t ready, but it wasn’t my choice, it was hers […] but the resentment was there for a long time.

These two comments came from tens of thousands of posts on the social media site Reddit we analysed as part of our research into men’s experiences of unplanned pregnancy.

Having an unplanned child is more common than you might think. In Australia 40% of pregnancies are mis-timed, unexpected or unwanted. That’s an estimate comparable with rates worldwide.

Most research on the impact of unplanned pregnancies focuses on mothers. We wanted to know about the experiences of dads. So we turned to two forums specifically for new and expecting dads on Reddit.

We “scraped” tens of thousands of posts, spanning a year, then applied an innovative machine learning technique to group the data into meaningful topics. This allowed us to identify themes in the men’s online discussions.

Here’s what we found

Our research showed men who reluctantly or unexpectedly became fathers experienced a complex range of emotions and reactions. Many needed support.

The dads in our study posted to Reddit using pseudonyms. So they were free to be honest and raw as they shared their emotions on a topic many consider taboo.

Some were “filled with regret”, “sadness”, “guilt” and hopelessness of a “never-ending, soul-crushing grind”. Some lacked bonds with their infants, one feeling “like the tin man without a heart”.

I keep on having really bad breakdown episodes. There are days when I just sit and cry thinking how miserable my life has become.

Earlier research shows it’s common for dads to have short periods of negative thoughts after their baby is born. Feelings of loss about their previous life are common.

However, persistent negative and intense emotions may indicate depression and anxiety at this time.

In fact, unintended fatherhood is linked to an increased risk of a man having postnatal depression.

Paternal depression is, in turn, linked to a higher risk of depression in their partners and more behavioural problems in their children.

Like earlier research, ours debunks the myth that men do not seek help when in need. Men sought and received advice and support from other dads about everything from night feeds and nappies to reassurance that what they were feeling was normal.

Studies show peer support, often online, can be a foot-in-the-door for men who feel uncomfortable disclosing vulnerability. This is particularly important for a taboo subject such as unwanted parenthood.

In our study, not all men were distressed. Some reported feeling happy “but freaking out” and simultaneously “scared, hopeful, excited, terrified”.

Sharing experiences allowed these fathers to validate and normalise the full spectrum of their emotions and sometimes re-frame a sense of hopelessness.

Men told each other “you are not alone”, “I felt the same”, “it does get better” and “it’s not as bad as people say”.

How to reduce the stigma

In this study and our earlier research men said they were concerned that not wanting children would be seen as abnormal.

We hope our work raises awareness that desire for children is not universal. We can do more to normalise and destigmatise varied narratives that represent how people feel about parenthood.

When it comes to family planning, a first step is to include men in discussions about reproductive health before they become fathers and are expecting a child.

Pre-conception planning with health professionals involves becoming physically and psychologically ready for parenthood and is important for mothers, fathers and, ultimately, their offspring.

Once the baby is born, it is important dads have access to support. Family and health-care systems are mainly focused on mothers and infants, and could be better equipped, resourced and trained to detect fathers at risk of mental health problems. Father-inclusive practice is beneficial to fathers, mothers and children.

When fathers have access to the right help at the right time, it can make all the difference. One man said:
I ended up going to a psychiatrist after a suicide attempt. It did some good, it faced me with my own immaturity. May I suggest trying it? Everybody is different, but it seriously helped in my case.

Music from near and far at Technopolis 20

Russian forces advance, US to send precision rockets to Ukraine