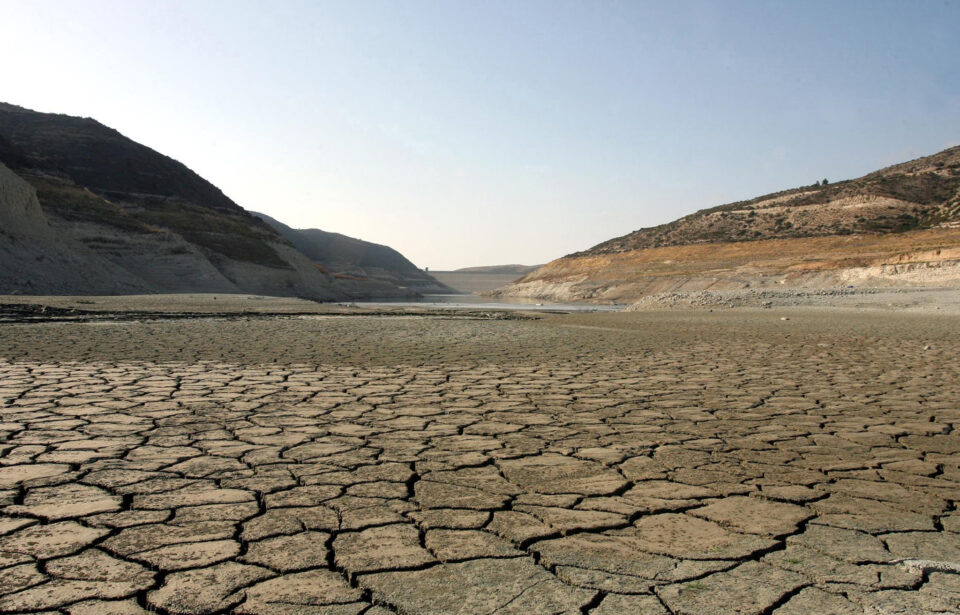 Kouris dam during a period of drought (CNA)

The green party urges people to ask the older generation about how much richer and healthier the natural environment used to be in light of the world environment day in Sunday.

“Climate change has had a dramatic effect on our country and the situation will only get worse with summer heat waves now a common occurrence,” a statement signed by the party’s leader, Charalambos Theopemptou reads.

Gradually, Cyprus will be a victim of desertification and we too will become climate migrants looking for a better life, the MP added.

This year, Theopemptou said, “please ask the grandmothers and grandfathers when the first rainfall was when they were young”.

It was in September, the 66-year-old politician said, whereas now we wait until November for the first rainfall of the season. This impacts the flora of the island, as trees and plant are without water for six months.

Snow was also much more frequent and often exceeded one metre depth in Troodos, the statement said.

Dust episodes were also recorded once every few years and not several times per year.

Concerning biodiversity, again urging people to speak with elderly people they might know, the party said there were a lot more different species of birds and flowers, while the water in the sea was cleaner and full of various fish, crabs and sea urchins.

It added that vegetation was thick, in contrast with recent years that we uprooted trees to develop houses and sell properties to foreign investors.

“Along with all these, we are slowly selling out Akamas as it always happens before the presidential elections,” Theopemptou said, adding that it is rumoured authorities will allow development in coastal areas, invading protected areas.

“Scientists have told us many times over the years that if we continue like this, we will destroy our planet,”

To mark the day, the Green Party is holding an anti-nuclear – anti-war rally outside the Russian Embassy at 10.30am on Sunday, against the plants to build a nuclear power plant at Akkuyu in Mersin province, Turkey. The Akkuyu nuclear power plant (NPP) is part of a cooperation agreement between Russia and Turkey signed in 2010.

Experts have warned that in case of an unexpected nuclear accident, Cyprus, which was excluded from NPP’s environmental impact assessment, will be seriously affected.

Southgate ‘surprised’ by number of Hungary fans in closed-doors clash