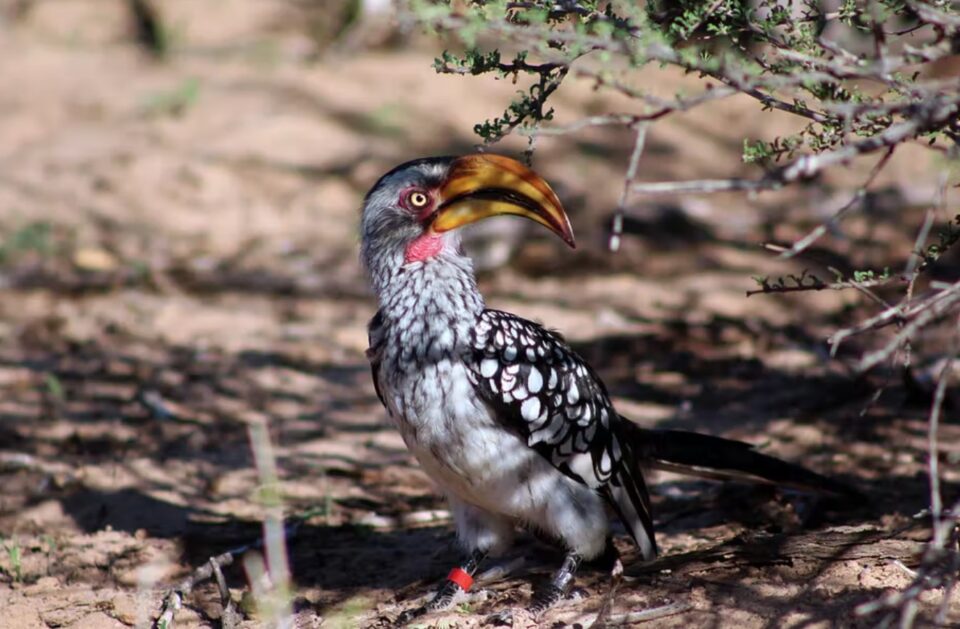 Rapid climate change has the potential to strongly influence the physiology, behaviour and breeding success of animals. Research is showing that increasing temperatures, for instance, are having negative effects on animals. These range from mass die-off events during heat waves to less obvious problems like difficulty finding food.

For birds in arid zones, rising temperatures pose a significant problem. Birds in these dry zones usually breed in response to rainfall, which often occurs during the hottest time of the year. And birds are mostly active during the day, when they are exposed to the sun’s heat. This is when their vital processes for reproduction take place – such as territorial defence, courtship, finding food for their young and attending the nest.

Research suggests that high temperatures over a few days or weeks can have negative effects on foraging and body mass. At the scale of one or two breeding seasons, these effects have a negative impact on breeding performance. This can be through reducing the condition of offspring or the probability that young birds will survive to adulthood and breed.

The longer-term effects of responses to high temperatures – over decades – are less well-known.

Our recent research aimed to help bridge this gap in knowledge. We assessed the effects of air temperature and drought on the breeding output of southern yellow-billed hornbills (Tockus leucomelas) in southern Africa’s Kalahari Desert over a decade period, from 2008 to 2019.

We found that the breeding output of our study population collapsed during the monitoring period and was strongly correlated with temperature and rainfall. In the Kalahari, air temperatures have already risen more than 2°C in a few decades. At this rate, by 2027, these birds will not breed at all at this site.

First we examined air temperature and rainfall data from the South African Weather Service for the Kalahari region between 1960 and 2020. The frequency and severity of drought have not changed but spring and summer average daily maximum air temperatures have been increasing. They have risen from about 34°C to well over 36°C from the mid 1990s to the present day. [This is from our paper] This equates to a warming rate of about 1°C per decade, a rate five times faster than the worldwide average of about 0.2°C per decade.

We then assessed the effects of air temperature and drought on the breeding output of a population of southern yellow-billed hornbills in the Kalahari over the decade 2008 to 2019. These birds are still common across much of central and eastern southern Africa.

The study population comprised about 25 pairs each breeding season. These hornbills nest in cavities and at our study site pairs usually made one breeding attempt per season. Their breeding strategy is unusual: the female seals herself inside the nest cavity and moults all her flight feathers. This leaves the male parent as the sole provisioner to the nest for the female parent and the chicks. A successful breeding attempt usually takes about two months, with a pair raising between one and four chicks.

Although the number of pairs at the site remained constant over the study decade, more pairs skipped breeding each year. And those which did breed did so less and less successfully, producing fewer offspring or none at all.

Without successful breeding, the population will not be able to persist, and will quickly become locally extinct.

We found that breeding output was negatively correlated with increasing air temperatures and the occurrence of drought within the breeding season. Breeding attempts all failed when average daily maximum air temperatures exceeded 35.7°C. And the effects of high air temperatures were present even in non-drought years.

Considering the strong negative correlation between high air temperature and breeding output, we argue that global warming has likely been the primary driver of the recent, rapid collapse in breeding success in our study population. The consequences of high air temperatures (regardless of high rainfall) and drought on the parents affect the probability of successfully fledging offspring or even attempting to breed at all.

Based on current warming trends, the 35.7°C threshold for successful breeding attempts will be exceeded for the entire hornbill breeding season by approximately 2027 at our study site.

Overall, while our study is specific to southern yellow-billed hornbills, we suggest that our findings are likely applicable to a range of species. Even for species that are unlikely to die in large numbers because of heat, climate change can drive rapid declines and potentially local extinctions.

In the short term, there are options such as providing water and insulated nest boxes.

Long-term, it would be necessary to preserve habitats which warm less rapidly or which can buffer the effects of climate change on biodiversity.

Even preservation of habitat won’t be enough, however, if the current rate of climate change is sustained. Recent models based on current rates of warming and what’s known about how birds handle heat are suggesting that rare and endangered species will be lost over the next century. But so will species which are currently common, such as the southern yellow-billed hornbill.