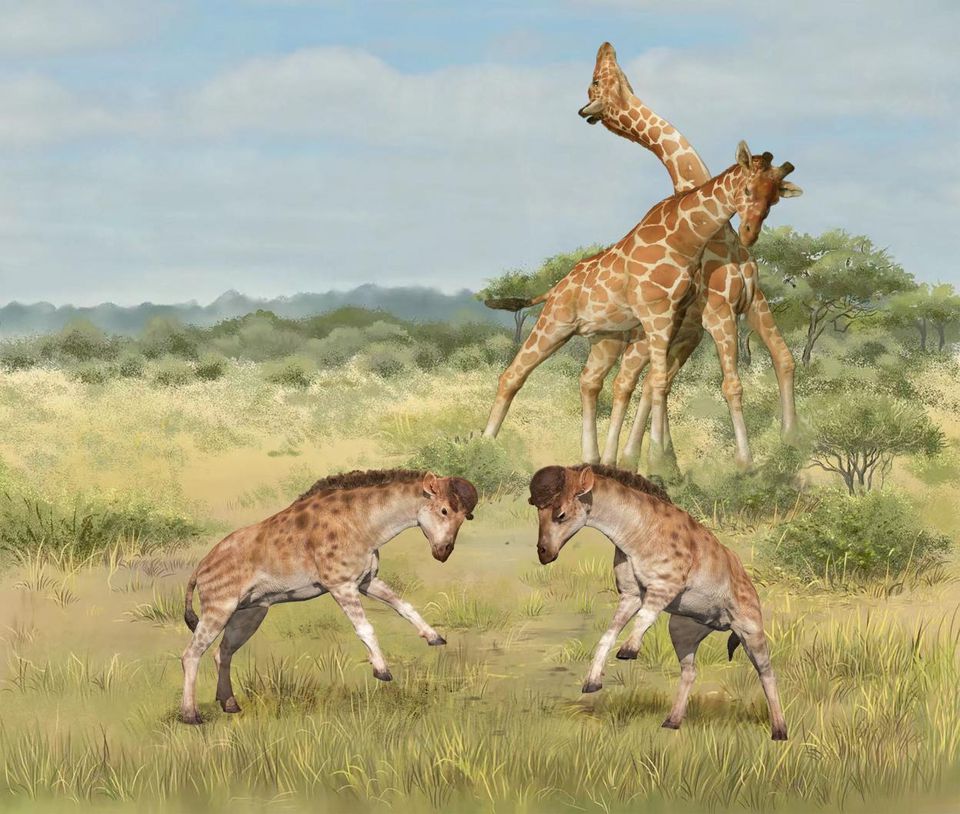 Fossils unearthed in China of a forerunner of the modern giraffe are offering insight into the early evolution of this mammal’s trademark long neck, driven not only by the benefit of reaching high foliage but also by head-bashing competition between males for mates.

Researchers on Thursday described skeletal remains including a thick skull and strong neck bones of an early member of the giraffe family called Discokeryx xiezhi, roughly the size of a large bighorn sheep, that lived about 17 million years ago in the Xinjiang region in northwestern China.

Discokeryx’s solidly built skull and strong cervical vertebrae were well adapted to high-speed head-to-head impact like that seen in competition among males of some mammal species for female mates, according to the researchers. Discokeryx boasted, they said, the most complex joints between the head and neck as well as between the individual neck bones of any mammal.

Discokeryx’s skull was topped by a single large disc-shaped and helmet-like ossicone, the name for the horn-like knobs atop giraffe’s heads.

“Ossicones, like horns and antlers, usually serve as weapons for males fighting for mates,” said Chinese Academy of Sciences paleontologist Shi-Qi Wang, lead author of the study published in the journal Science.

“Discokeryx has extreme morphologies of the head and neck adapted for head-butting behavior,” said paleontologist and study co-author Jin Meng of the American Museum of Natural History in New York.

“The traditional hypothesis for driving the elongation of the giraffe neck is eating – reaching up to get tree leaves. This new finding shows that, in the giraffe family, members do different things in their early evolution. The new species represents an extreme example in which the neck is not elongated but becomes very thick to absorb the power and impact from powerful head-butting,” Meng added.

Another hypothesis for giraffe neck evolution – one supported by Discokeryx’s anatomy – is that elongation was driven by behavior displayed in competition for mates like the “necking” seen in giraffes today in which males violently strike each other with their necks. Longer-necked males often win these duels.

“If a male giraffe has a shorter neck, then the female may refuse the mating request of the male,” Wang said.

Neck elongation independently evolved among several animal groups dating back hundreds of millions of years, also including marine reptiles such as Elasmosaurus and Tanystropheus, the various sauropod dinosaurs including Patagotitan and Mamenchisaurus and even swans and geese living today.

Discokeryx, according to the researchers, may offer a peek at the early stages of giraffe neck elongation that unfolded over millions of years, though this species took a different evolutionary route specialized for head-butting. Discokeryx is not considered a direct ancestor of today’s giraffe, but rather a side branch of the giraffe family.

The modern giraffe, found in sub-Saharan Africa, is the world’s tallest living land animal, with males up to 18 feet (5.5 meters) tall and females up to 14 feet (4.3 meters) tall. A giraffe’s neck, stretching about six feet (1.8 meters), is the longest of any extant animal, though it has just seven neck bones like other mammals.

Discokeryx inhabited an open grassland with patches of trees and shrubs during a time known as the Miocene epoch. It lived alongside shovel-tusked elephants, hornless rhinos, horned pigs, deer with crown-like antlers, three-toed horses and various antelopes. Predators included saber-toothed cats, hyenas and a member of a mammalian group called “dog bears” as big as a polar bear.