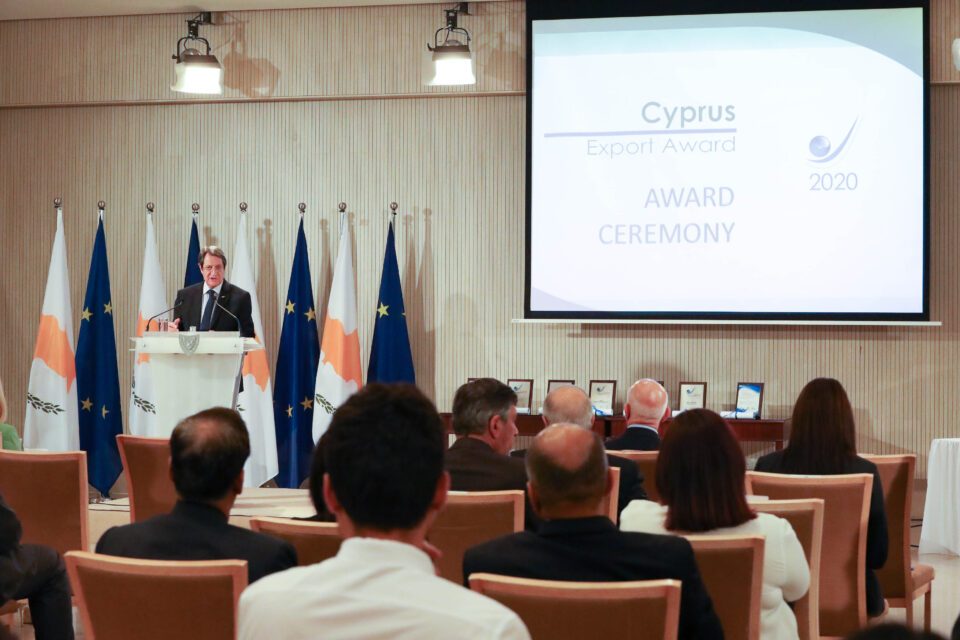 On Thursday addressing the award ceremony for 2020 exports, Anastasiades said the government would support, within its capabilities both vulnerable groups and businesses to deal with soaring prices (PIO)

President Anastasiades has eight months left in office and from his recent behaviour we can deduce that he is already thinking about his legacy and how he will be remembered. It might just be that he is considering seeking a third term, despite his repeated assurances to the contrary, and is paving the way for this. Although unlikely, the possibility cannot be ruled completely, given the zeal with which he has been promoting his government’s achievements and his populist pronouncements of the last few months.

He is not behaving like an outgoing president with less than a year left in office, but more like someone seeking to boost his popularity, either by saying things that will appeal to the public or by playing the role of society’s wise mediator and problem solver. Whenever there is an issue in the news, he calls a broad meeting at the presidential palace to address it personally, not always with success. This, presumably is to show that he is in touch with society’s problems, even though it also suggests he does not trust his ministers to provide solutions.

In the last few weeks, he has called a meeting to find ways of dealing with inflation – as if there were easy answers that Anastasiades could provide – a meeting with cheese producers about the halloumi PDO fiasco (a meeting with sheep and goat farmers scheduled for last week was postponed) and one about the traffic cameras as there was a dispute with the contractor. With the exception of the latter, which was a relatively straightforward issue that Anastasiades could have resolved with a phone call, no solutions were offered.

The finance minister, subsequently, announced some targeted measures for helping low-income families deal with inflation, which, as we all know, cannot be controlled with government measures. Having failed to do anything about this, Anastasiades decided to resort to populism. A few weeks ago he said there was always the Cost of Living Allowance for dealing with the rising prices, aware that this was a counter-productive measure but also aware that unions were demanding its re-introduction. He was pandering to the public, knowing that the automatic indexing of wages takes place at the start of every year.

On Thursday addressing the award ceremony for 2020 exports, Anastasiades said the government would support, within its capabilities both vulnerable groups and businesses to deal with soaring prices. And, inevitably, the government would clamp down on profiteering, as if this were the cause of rising prices. The government had also tabled a bill that would give the power to the commerce minister to set a maximum gross profit margin for business, as is the case socialist countries.

Anastasiades told the gathering : “In order to avoid any phenomena of profiteering, the ministry of energy, commerce and industry proceeded with the implementation of a series of measures such as the intensifying of checks on fuel prices and the systematic monitoring of changes in prices of basic consumer goods as well as continuous consultations with all stakeholders, so that, if it is deemed necessary, for plafond (ceilings) to be imposed on wholesale and retail prices.”

This is the type of populist platitudes the president is coming up with in order to create the impression that the government is doing something. Is he seriously suggesting that the soaring fuel and electricity prices are the result of profiteering? Is the state-owned Electricity Authority profiteering as well, given that electricity prices have soared? Are the high prices making it necessary to for the government to impose a “maximum gross profit margin”? And how will this be done? Will the state hire an army of accountants to inspect the books of companies in order to implement this illiberal law? It is a peculiar way of achieving the government objective of supporting businesses through these difficult times.

As for the intention to impose plafond on wholesale and retail prices, it will never happen because ceilings do not work. They create shortages that cause more problems for consumers. Unless the Anastasiades government also plans to pass a law forcing businesses to sell basic consumer goods at a loss. He has not said such a thing because he raised the plafond and profiteering, in order to pander to public opinion. We doubt very much the finance minister, who has been commendably pragmatic in dealing with inflation, would pursue the president’s irrational economic remedies, that smack of ‘Akel-think’.

The irony is that there is no need to blame business ‘profiteering’ for the situation as inflation is imported, caused by soaring world energy prices and steadily rising grain and food costs. Nobody is blaming his government for inflation, which is a worldwide phenomenon, so why does he feel the need to engage in this populist, anti-business rhetoric that serves no purpose at all. With only eight months left for him in office, Anastasiades owes it to the people to give up this shameful populism that poisons public life and creates unrealistic expectations.

Tales from the Coffeeshop: The political ideology of promising all things to all people