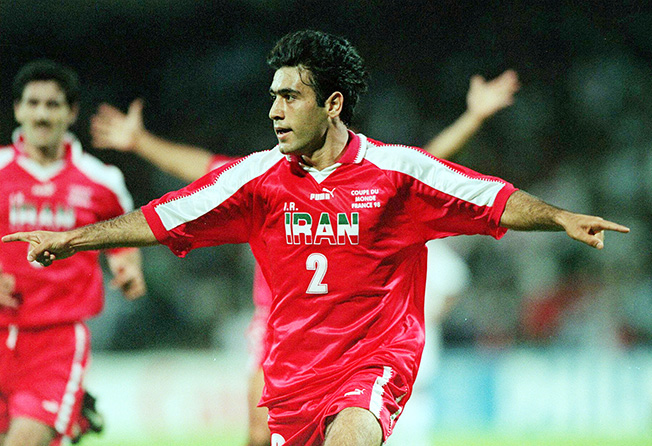 More than two decades have passed since Iran’s Mehdi Mahdavikia famously sealed a 2-1 victory over the United States but the thrill of delivering his country their first ever World Cup win has not faded.

Tuesday marked the 24th anniversary of the meeting between the ideologically opposed nations at France 98 in a game widely viewed as the mostly politically charged in World Cup history.

They will meet again at the World Cup later this year after being drawn in the same group in Qatar but that meeting is unlikely to be as hyped as the Lyon clash, which was decided by Mahdavikia’s breakaway goal.

“Iran versus the United States was the match of the century,” the 44-year-old former SV Hamburg wing back told Reuters.

“That goal was one of the biggest, most memorable and remarkable times in my life. I will never, ever forget that moment.

“I was young, it was a very important match in the World Cup, it was Iran against the United States, it was the first win for Iran at the World Cup and so the whole recipe was there to make that a memorable cake for the rest of my life.”

Iranian fans turned out in their thousands at Lyon’s Stade Gerland for the first international meeting between two nations that had been at loggerheads since the 1979 Iranian revolution.

Security was tight but the prospects of any animosity spilling onto the field were rapidly diffused as the Iranians presented the Americans with bouquets of roses and the teams posed for a joint photograph.

The match was hotly contested, however, with Hamid Estili’s header giving the Iranians the lead in the first half and Mahdavikia tearing down the left wing to double it six minutes from time.

Mahdavikia’s strike ultimately proved decisive as Brian McBride’s header three minutes later set up a tense conclusion with the Iranians holding on for a victory that triggered wild celebrations back home.

“That win was an important win from any angle you look at it,” Mahdavikia recalled.

“From a sports perspective it was an historical moment because we made the first win in Iranian football history at the World Cup.

“For the country it became a huge celebration, so it was also historic. And even politically it became an important moment, so we never forget that one. It was a special day.”

Iran have won only one World Cup match since – against Morocco in Russia in 2018 – and Mahdavikia is expecting another major test for Team Melli when they meet the Americans in November.

“The United States have some young players who are playing in Europe so overall I believe the U.S. team are much stronger than they were in 1998 and I’m sure they will be much more difficult in Qatar,” he added.

“It might still be affected by the political environment, this match might be somehow under that shadow.

“But I’m sure those players are professional, they are experienced and they can stay focused on the sport and the match itself regardless of what is going on in the politics.

“I hope that it’s a good game and I wish that Iran can win again.”

Villages evacuated as fire keeps blazing in the north (Update 5)