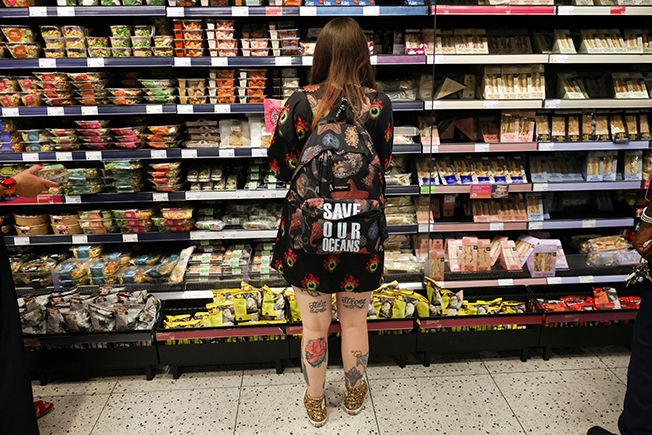 A woman looks at food goods in a shop in London

Russia on Wednesday said the West was spreading lies about the causes of the global food crisis which Moscow said was being stoked by the sanctions imposed on Russia by the United States and European Union due to the invasion of Ukraine.

Besides the death and devastation sown by Russia’s invasion, the war and the West’s attempt to cripple Russia’s economy as punishment have sent the price of grain, cooking oil, fertiliser and energy soaring, hurting global growth.

Russian foreign ministry spokeswoman Maria Zakharova told reporters in Moscow she was dismayed by repeated Western statements that Russia was to blame for the global food crisis.

The war in Ukraine is fuelling a global food crisis

“It is a lie – such accusations are complete lies,” Zakharova said. “So the West can supply all these arms to Ukraine but for some reason nothing can be taken out of Ukraine?”

The United States and European Union members, which are supplying arms to Ukraine, have accused Russia of stoking a food crisis by preventing grain exports from Ukraine – which accounts for about one tenth of global wheat exports.

Ukrainian President Volodymyr Zelenskiy warned on June 9 that millions of people could starve because of a Russian blockade of Ukraine’s Black Sea ports which he said had left the world “on the brink of a terrible food crisis”.

Russia and Ukraine are two of the most important producers of agricultural commodities in the world. Russia is the world’s largest wheat exporter after the European Union while Ukraine is the world’s top sunflower seed exporter.

Both play a big role on the barley, maize and rapeseed markets while Russia is one of the world’s top fertiliser exporters.

Western sanctions, Zakharova said, had tipped agricultural markets towards the edge of the abyss by disrupting payment systems, shipping, insurance which had prevented many Russian exports of food and fertiliser.

“It is illogical – on the one hand the European Union… says a threat to global food security is being created but at the same time they block the delivery routes of goods to themselves on their own continent,” Zakharova said.

President Vladimir Putin and Russian officials do not use the words “war” or “invasion”. They cast the action as a “special military operation” aimed at preventing the persecution of Russian speakers in eastern Ukraine.

Putin also casts the war as a revolt against the United States, which he says has humiliated Russia since the 1991 fall of the Soviet Union by pushing for the enlargement of the NATO military alliance westwards.

Ukraine says it is fighting for its survival against a land grab by Russia and that it will fight to the end to free its territory from Russian control. Kyiv dismisses claims that Russian-speakers have been persecuted.

Eritrea, Armenia, Mongolia, Azerbaijan, Georgia, Somalia, Belarus, Turkey, Madagascar, Lebanon, Egypt and Pakistan depend on Russia or Ukraine for more than 70% of their wheat imports in 2021, according to United Nations data.

Mongolia, Kazakhstan, Moldova, Serbia, Honduras and Ghana rely on Russia for 50% or more of their fertiliser imports in 2021, according to the data.

Britain must do more to help poor during cost of living crisis, says Asda chairman