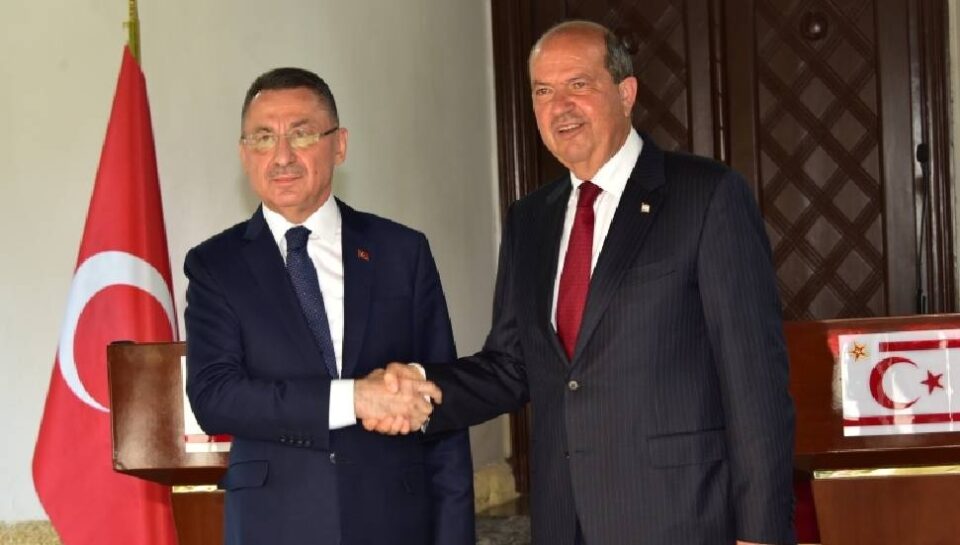 Turkey’s Vice President Fuat Oktay was in the north on Thursday to bolster Turkish Cypriot leader Ersin Tatar whose election “had shown the desire of Turkish Cypriots for a two-state solution” in Cyprus, he said.

Oktay together with Tatar, first visited the area of Kantaras where a devastating fire was still underway.

In his statements at a news conference following a private meeting between the pair, Oktay said Turkey attached great importance to the strengthening of the ‘TRNC’ and said that Ankara fully supported the Turkish Cypriots in establishing their sovereignty, Bayrak reported.

Oktay also said that the Turkish Cypriot people had shown their desire for a two-state solution by electing Tatar as ‘president’.

“What bothers the Greeks is the fact that the people of the TRNC stand upright” Oktay added.

“Turkey ‘s support for the TRNC is comprehensive and everyone should know that. The policies of defamation and intimidation cannot intimidate us,” he said.

Oktay emphasised that as Turkey, they were ready to do whatever they could to develop the ‘TRNC’ in the political and social fields.

For his part, Tatar touched upon the subject of Varosha and said that ‘Maraş’ as it is called in Turkish, was within the borders of the ‘TRNC’ and said that in the coming days, different infrastructure works would be carried out and the area would continue to be opened to the public.

“I would like to underline how important the guarantor of the Republic of Turkey is for us, especially as the Russian-Ukrainian war has shown lately,” Tatar said.
Stating that the essence of the Cyprus issue was a matter of sovereignty, Tatar emphasised once again that

Turkish Cypriots were in favour of a solution based on cooperation between two separate states in Cyprus, where two peoples can live side by side, and said, “Our new policy has become permanent, there is no turning back from it,” Tatar said.

Meanwhile, a letter from Tatar to President Nicos Anastasiades dated June 20 was published on Thursday by Phileleftheros, also insisted on the two-state solution.

Tatar said there was no basis for new Cyprus negotiations and referred to the UN Secretary-General’s report at the informal Geneva plenary that there was no common ground.

In his letter, Tatar also urged the Greek Cypriot side to accept sovereign equality and equal international status.

At the same time, he called for the lifting of the isolation of Turkish Cypriots and urged the Greek Cypriot side to “put an end to its obstructive policies”.

Tatar also said that he intended to submit his own package of Confidence Building Measures (CBMs).
In response to Tatar’s comments, government spokesman Marios Pelekanos told the Cyprus News Agency (CNA) that “essentially Turkey and the occupying regime continue both their provocations and their intransigent stance. This is in complete contradiction to our fair attitude and effort to bring the Cyprus problem back to a resolution track, by presenting proposals that will bring mutual benefit to both sides and help create the right climate that will allow us to return to the negotiating table,” Pelekanos told CNA.

He added that “once again the unacceptable claim of the other side for recognition of equal sovereign rights to the illegal regime is repeated. Something that certainly serves their goal of leading to a two-state solution and something that we will not accept under any circumstances,” he said.

“We will await the proposals that Tatar intends to put forward, as he states in his letter, making it clear that for there to be a basis for discussing them, they must be in line with what is provided for in the UN Security Council resolutions on Cyprus, international law and what the EU’s principles and values impose on us,” Pelekanos concluded.

Cyprus 4.0: The Role of Financial Services in Society