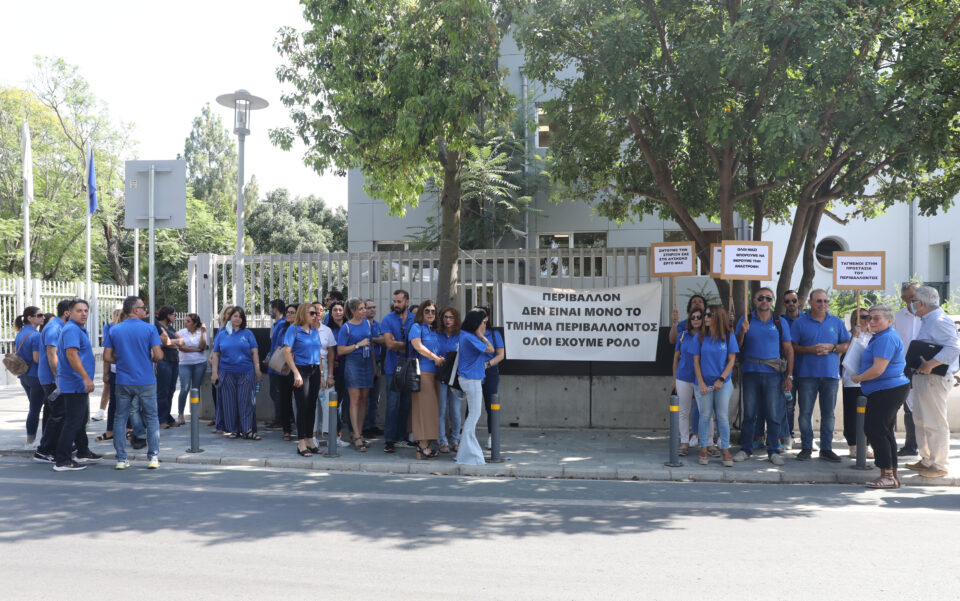 Personnel from the agriculture ministry’s environment department, members of the civil servants’ union Pasydy, staged a protest on Friday morning outside the House of Representatives where the environment committee held a session on the risk, health, and safety aspects of recyclable tyre storage areas.

The personnel are protesting the department’s understaffing and the unfair attacks often levelled against them.

They say that the department’s personnel are often subjects to insults, provocations, and threats because of the perception of the work being done there or lack thereof. Moreover, they consider the critique levelled against the department from the Republic’s Audit office as misplaced.

Regarding the department’s staffing numbers, they cite studies produced in the last 20 years whose recommendations have yet to be addressed. This include the need for at least 180 organic positions while the 2022 budget only has approved 89 positions, of which 40 have yet to be filled.

According to Neoklis Antoniou, environmental officer A’ and Pasydy representative, the department is currently staffed by 70 individuals of which 49 are filled by seconded personnel from other services. He said the department’s inspectors are tasked with a workload disproportionate to their numbers.

“There are eight inspectors who are assigned to more than 2,000 industries, more than 1,000 waste carriers and more than 800 large livestock units,” Antoniou said.

“Annually, the department of environment also receives about 400 complaints, to which these eight people must respond,” he added.

Members of the parliament echoed the concerns regarding the inspectors.

“As a polity, we have demands from the people who inspect these units as required by the relevant legislation and as stated by the auditor-general. However, it is true and accepted that the department’s staff are less than half than what they should have been and therefore, there’s no chance for them to respond to the requirements imposed,” Akel MP Nikos Kettiros stated.

“We have well-trained staff but there is a terrible problem regarding inspections. The staff numbers must increase, and we need to have more regular inspections because the directives are being constantly revised and the legislative work that needs to be done is significant,” Green party leader Charalambos Theopemptou said.

Disy MP Prodromos Alambrites also noted that the responsibilities imposed on the department by EU’s Green Deal are significant.

“We believe that the legislation we have been passing lately carry significant responsibilities and demands for audits. The issue of understaffing must be addressed immediately,” he said.

The department’s personnel also notes that in recent years they have collected 10,500 tonnes of tyres, that is, approximately 800,000 tyres, which if left exposed would constitute potential sources of fire, and pollution.

They lastly warn that without proper and immediate staffing of the department, the environment and public health are in immediate danger.

House president Annita Demetriou met and discussed with the protestors in person, outside the parliament’s premises were she also received a letter with their demands. Demetriou pointed out that in order to increase staff numbers, the budget must be changed and that’s a responsibility concerning the executive branch.