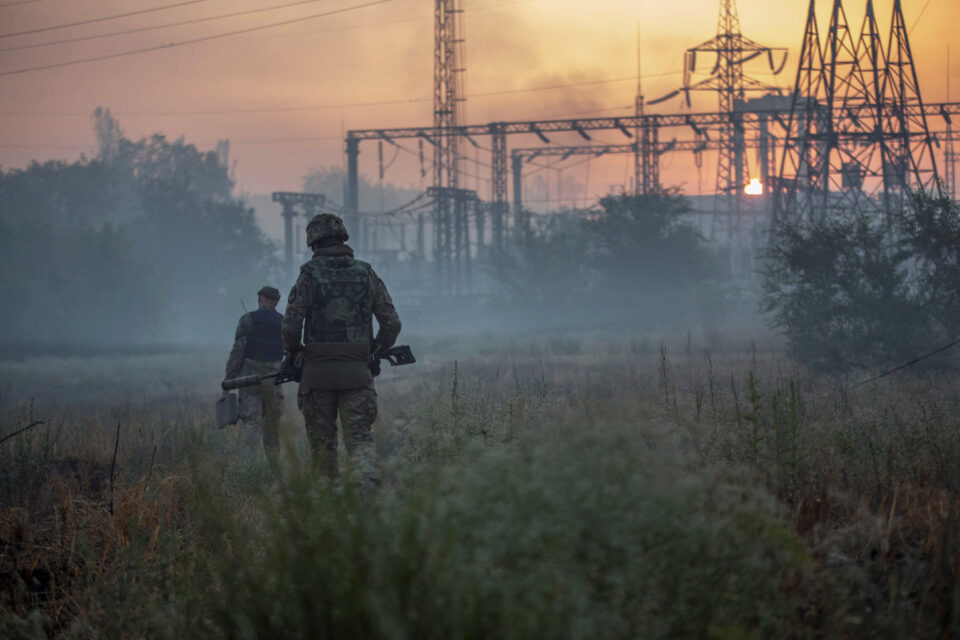 Ukrainian service members in the city of Sievierodonetsk

Ukraine was set to pull its troops from the ruined city of Sievierodonetsk after weeks of street fighting and bombardment, the regional governor said, in what would be a significant gain for Russia as it grinds out its offensive in the east.

Russian troops also fully occupied a town about 10 km (6 miles) further south, Ukrainian officials said on Friday, as Moscow closed in on the last slivers of Ukrainian-held territory in the industrial region of Luhansk.

Moscow said it had encircled about 2,000 Ukrainian troops in the area. Reuters could not independently verify any of the battlefield accounts.

The reports came four months to the day since Russian President Vladimir Putin sent tens of thousands of troops over the border, unleashing a conflict that has killed thousands, uprooted millions and reduced whole cities to rubble.

The latest Russian advances appeared to bring the Kremlin closer to taking full control of Luhansk, one of Moscow’s stated war objectives, and set the stage for Sievierodonetsk’s twin city of Lysychansk to become the next main focus of fighting.

“Remaining in positions smashed to pieces over many months just for the sake of staying there does not make sense,” Gaidai said on Ukrainian television.

NOTHING LEFT TO DEFEND

Russia invaded Ukraine on Feb. 24, but abandoned an early advance on the capital Kyiv in the face of fierce resistance bolstered by Western arms.

Since then Moscow and its proxies have been focused on battles along the front line in Ukraine‘s south and in Donbas, an eastern territory made up of Luhansk and its neighbour Donetsk.

Ukrainian forces had held out for weeks against an onslaught in Sievierodonetsk, trying to wear down Russian troops through attrition and buy time for the arrival of heavy weapons supplies.

“Our forces had to withdraw and conduct a tactical retreat because there was essentially nothing left there to defend. There was no city left there and, secondly, we could not allow them to be encircled,” Oleksander Musiyenko, a Kyiv-based military analyst, said.

Ukraine‘s Defence Ministry said the Russians were trying to surround Lysychansk and mounting assaults on Sievierodonetsk to win full control. But spokesperson Oleksandr Motuzyanyk declined to comment on Gaidai’s remarks about a withdrawal.

South of Lysychansk, Russian troops had entered the town of Hirske and fully occupied the district on Friday, municipal head Oleksiy Babchenko said.

Russia’s defence ministry said it had encircled up to 2,000 Ukrainian troops, including 80 foreign fighters, at Hirske.

Russian control of the Donbas region though proxy separatists would allow it to link up with Crimea to the south, which Moscow annexed from Ukraine in 2014.

But Ukraine‘s foreign minister played down the significance of the possible loss of more territory in the Donbas.

“Putin wanted to occupy the Donbas by May 9. We are (there) on June 24 and still fighting. Retreating from a few battles does not mean losing the war at all,” Dmytro Kuleba said in an interview with the Italian newspaper Corriere della Sera.

He sounded pessimistic about the prospects of any peace talks soon.

“Only our military victory will convince Russia to engage in serious peace negotiations. Weapons will secure the diplomatic route,” Kuleba said.

A senior U.S. defence official said Russia had been unable to stop Western weapons flowing into Ukraine, including longer-range systems that Kyiv hopes will still be decisive on the battlefield.

He also said the Ukrainians’ withdrawal from Sievierodonetsk could actually end up leaving them in a stronger position.

“What they are doing is putting themselves in a position where they can better defend themselves,” the official said, speaking on condition of anonymity.

Russia says it sent troops into Ukraine to degrade its southern neighbour’s military capabilities and root out people it called dangerous nationalists.

The war has had a massive impact on the global economy and European security arrangements, driving up gas, oil and food prices, pushing the EU to reduce its heavy reliance on Russian energy and prompting Finland and Sweden to seek NATO membership.

The U.N. nuclear watchdog said it was is increasingly concerned about the welfare of Ukrainian staff at the Russian-held Zaporizhzhia nuclear power plant in southeastern Ukraine, Europe’s largest.

The International Atomic Energy Agency has for months said that Zaporizhzhia, where Ukrainian staff are operating the plant under the order of Russian troops, poses a safety risk and that it wants to send a mission there.