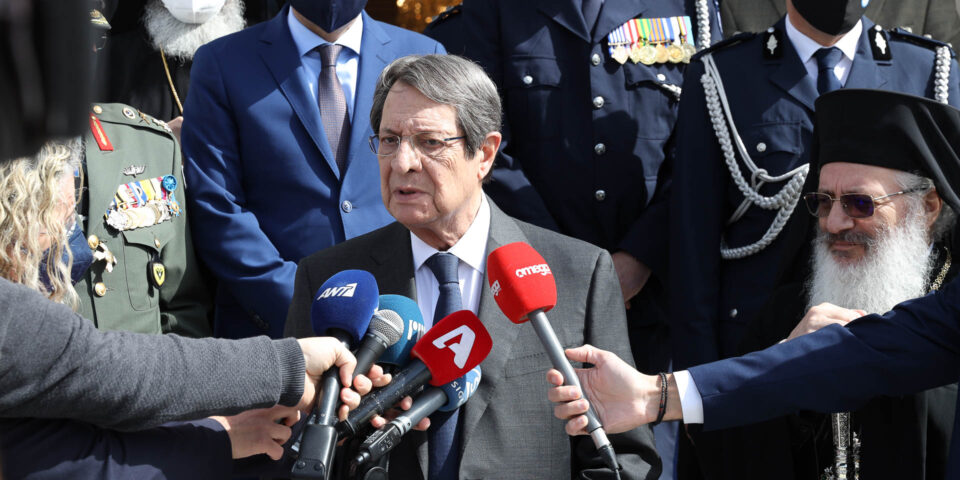 President Nicos Anastasiades will attend a dinner with EU and Nato leaders in Madrid next week, the government announced on Saturday.

According to a written statement by the Director of the Press Office of the president, Andreas Iosif, Anastasiades will travel to the Spanish capital on Tuesday, where the Nato summit will take place.

He will attend a dinner hosted by Spanish Prime Minister Pedro Sánchez on the sidelines of the summit for EU and Nato leaders, during which the president will make a speech.

The trip will give the president of the Republic the opportunity to meet bilaterally with foreign leaders and brief them on issues of concern to Cyprus, the main being the Cyprus problem, the announcement said.

“His proposal for the implementation of the confidence-building measures (CBMs) which will assist the whole process and the need for the Turkish side to abandon its provocative actions and intransigent stance will be at the centre of President Anastasiades’ contacts”, Iosif said.

The President will return to Cyprus on Thursday.

Next week, Anastasiades will also hold meetings with the UN Assistant Secretary-General Miroslav Jenča and the UN Special Representative and the Head of the United Nations Peacekeeping Force in Cyprus Colin Stewart.

The president’s schedule starts with the swearing-in ceremony of the new members of the Government will take place at the presidential palace at 9.30am on Monday.

This will be followed at 11.30am by a meeting with the Special Representative of the UN Secretary General in Cyprus, Colin Stewart. The meeting will take place in the presence of the foreign minister and the negotiator for the Cyprus problem. There, the president will reiterate the positions of the Greek Cypriot side and its will and commitment to resume the negotiation process for the resolution of the Cyprus problem.

In the afternoon of the same day, at 7.15pm, Anastasiades will attend and address the graduation ceremony of the faculty of humanities and the faculty of philosophy of the University of Cyprus.

After his visit to Madrid, a meeting will be held with the ministers of finance, energy, the Cyprus energy regulatory authority and EAC on Friday at 9.30 in the morning. The meeting will be chaired by President Anastasiades and will focus on the issues of electricity prices and renewable energy sources.

“The government’s effort is to find ways to reduce the price of electricity for the benefit of consumers,” the statement said.

Later that day, at 11.30am, Anastasiades will meet with the Assistant Secretary-General for Europe, Central Asia and the Americas, at the Department of Political and Peace Affairs, Miroslav Jenča and reiterate the readiness and will of the Greek Cypriot side to resume the talks for the resolution of the Cyprus problem.

“He will reiterate that the agreed solution to the Cyprus problem is the bizonal bicommunal federation and that the Turkish Cypriot side should abandon its unacceptable position on the alleged existence of two states in Cyprus,”

Anastasiades will again raise the issue of the illegal actions of Turkey and the Turkish Cypriot side and will ask for the reversal of the fait accompli in Varosha,” Iosif said.

On Friday evening, the president will attend and address the 10th CIPA Investment Awards ceremony and refer to the course of the Cypriot economy and the implementation of the Cyprus – Tomorrow Plan, which will bring a new model of development of the country, will contribute to the growth of GDP by 7 per cent and will create 11 thousand new jobs.