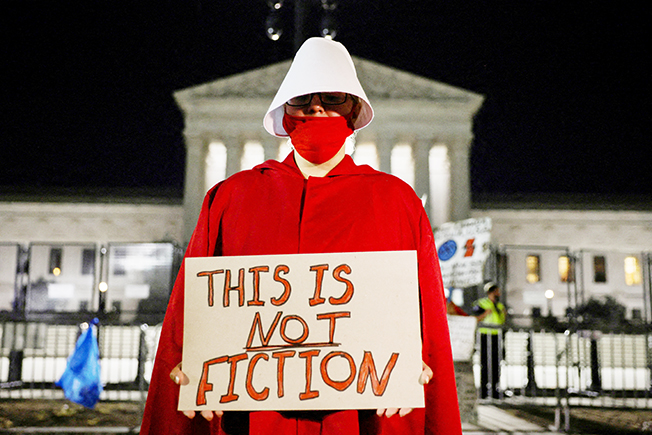 Some cried tears of joy, others looked downcast and chanted defiantly that the battle was not yet lost as hundreds of protesters outside the U.S. Supreme Court celebrated or condemned its ruling to overturn the right to an abortion.

Despite some fears that the emotionally wrought issue could trigger violence, the protests by abortion rights opponents and supporters, many of them university students, took place peacefully, with the two groups standing on either side of the court building on First Street in Washington, D.C.

Many gathered on Friday before the court took the dramatic step of overturning the landmark 1973 Roe v. Wade ruling that recognized a woman’s constitutional right to an abortion and legalized it nationwide. Read full story

“I am overwhelmed with gratitude that the Supreme Court took it upon themselves to take the brave action to save these babies,” said Macy Petty, 22, from South Carolina.

Petty sank to her knees crying on hearing the news of the court’s decision, while fellow activists around her cheered and sang a song about Jesus loving all people.

Opinion polls show a majority of Americans support abortion rights. But overturning Roe has been a goal of opponents and Christian conservatives for decades, with annual marches in Washington including in January of this year.

The packed street in front of the fenced-off Supreme Court was divided down the middle.

On one side, there was a party atmosphere as abortion rights opponents played music, blew bubbles, danced and chanted “Goodbye Roe.” On the other side, abortion rights advocates chanted “no justice, no peace.”

“I am here to stand against the shame in our country that has allowed for the killing of innocent preborn lives,” said Marco Sanchez, 23, from Portland, Oregon, who has been involved in Students for Life anti-abortion group since his junior year of high school.

About a dozen female Democratic lawmakers walked outside the U.S. Capitol to address the demonstrators for abortion rights, including progressive Alexandria Ocasio-Cortez, who chanted “into the streets.”

“Forced motherhood is illegitimate. This must not stand. Legal nationwide abortion on command is what’s needed and people need to flood the streets and not stop until that demand is won,” Goldman said.

Several abortion rights activists said the court seemed to be out of step with public opinion, as a majority of Americans favor abortion access.

“To overturn a ruling that’s stood for this long based on a court system that has become political is devastating,” said Nancy Johnson, who flew in from the state of Washington to protest.

“It feels like there are a narrow group of citizens who are making laws. I worry that if this could happen, what’s next. We should all worry about that; not just women.”

Time lost to get an abortion in states with trigger banshttps://tmsnrt.rs/3HvK96L