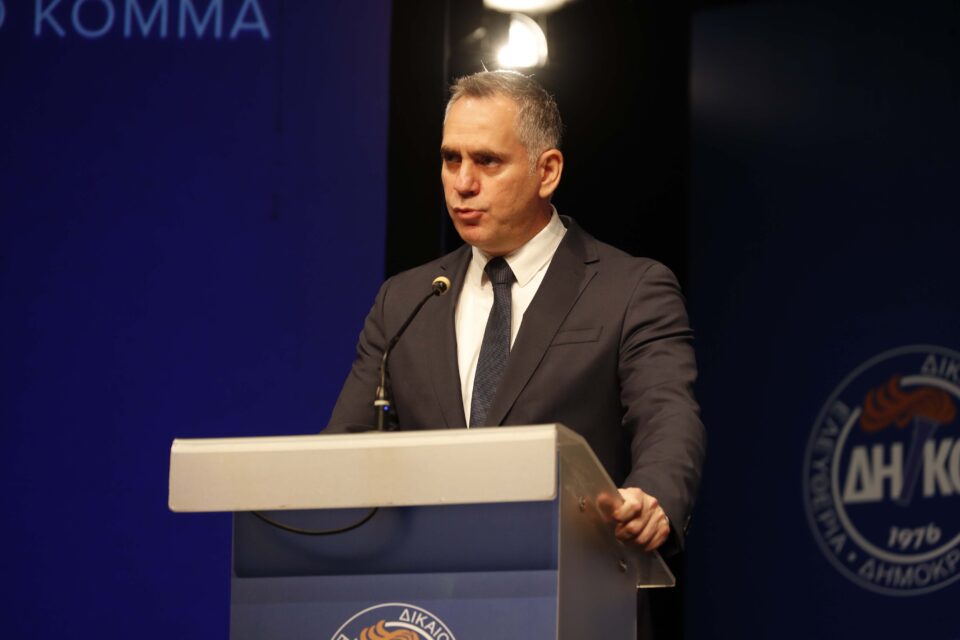 Centre-right Diko’s central committee has unanimously decided to support the candidacy of Nikos Christodoulides for the upcoming presidential elections.

The committee met on Sunday to cast their votes following a lengthy speech by Diko leader Nicolas Papadopopulos setting out why the party should support the former foreign minister and Disy member who is running as an independent.

According to reports, the central committee voted unanimously in favour with 132 votes with only one abstention.

In his address to the members, prior to voting, Papadopoulos went all out to support Christodoulides, saying the latter’s goals were aligned with those of the party whereas his discussions with other potential candiates had not been fruitful.

Papadopoulos said despite giving it priority, it was not possible to agree with main opposition Akel on backing former Cyprus negotiator Andreas Mavroyiannis.

“Our goal was always to achieve the widest possible collaborations,” he said.

“This intra-party and inter-party dialogue has been constructive and useful and is now complete,” he added and said that the party had now obtained a clear picture of the expectations of members and supporters, but also of society.

“The time for decisions has now come. Our goal remains: to bring change in 2023”.

For this reason, after all this consultation, exchange of views and intense reflection, the executive office of the party decided to propose to the central committee the support Christodoulides.

“Citizens are frustrated, bitter, and even angry about the negative developments in recent years, for wrong decisions and wrong policies, for the financial pressures they feel, for the polarisation and division caused by the attitude of the big traditional parties and for the indifference they feel the state shows for their problems,” Papadopoulos said.

“Society demands a different, independent, candidacy that unites and does not divide, that serves its own priorities and not party agendas.”

Christodoulides, he added was someone who brings hope as he does not speak divisively and is honest, and accepts Diko’s manifesto as being close to his own agenda for change.

These would include, according to Papadopoulos, a need to review tactics and strategy in the Cyprus issue in view of the Turkish intransigence but not to review the basis for a solution, a significant increase in defence spending to reach 2 per cent of GDP and the upgrading of the national guard, the creation of a state department for immigration and the adoption of stricter measures against corruption.

For society as a whole, proposals would include measures to address the cost of living, the introduction of a minimum wage, higher pensions and the abolition of doubly taxing electricity bills. Issues for refugees and farmers would also be high on the agenda, he said

“Of course, our party maintains its own autonomy and independence. The right to differentiate on specific issues both pre-election and post-election,” he said.

“We recognise and want to preserve the real independence of Nikos Christodoulides. But we believe that through these proposals, there is an expanded common political framework that can lead to a productive cooperation with him.”

Papadopoulos also acknowledged that Diko had had disagreements with Christodoulides in the past on important issues when he was part of the current government.

“We are ready to put aside disagreements of the past and focus on the future, to focus on what unites us and not on what separates us,” he said.

Christodoulides announced his candidacy for the presidential elections on May 12 in a wide-ranging address to the public from social media.

The burgeoning field of candidates, now standing at a dozen vying for the top spot, has thrown the island into a pre-election campaign mode close to nine months before votes are cast.

The view of there being three main candidates was reiterated by Neophytou on Tuesday when he said “There is the Diko candidate [meaning Christodoulides], Akel’s candidate [Mavroyiannis] and the ‘original’, the Disy leader [referring to himself].”

He further detailed that on July 4, marking 46 years since the founding of Disy, the party will announce a 100-point election manifesto.