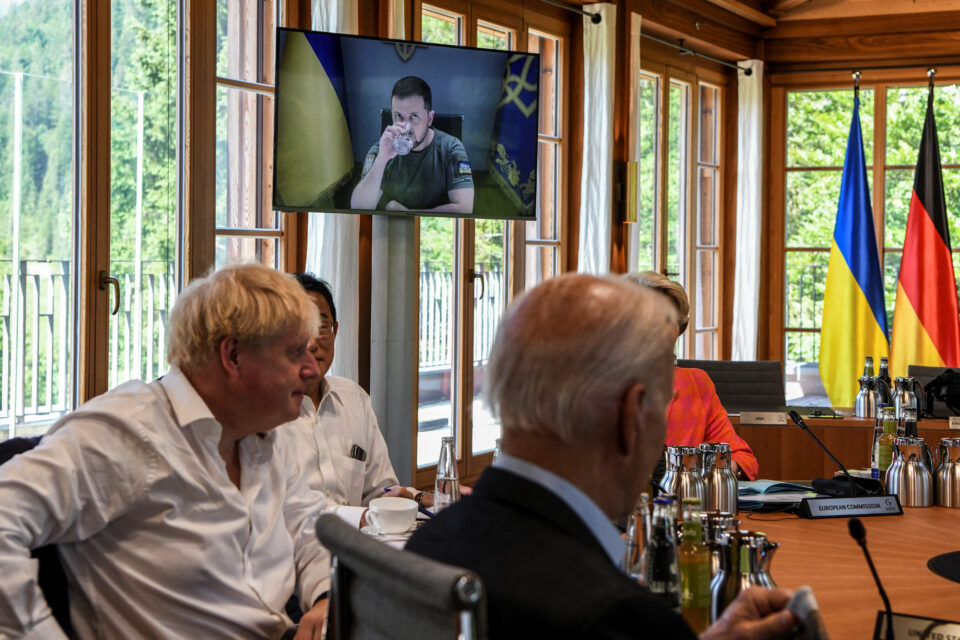 The Group of Seven club of wealthy nations on Monday vowed to stand with Ukraine “for as long as it takes”, promising to tighten the squeeze on Russia’s finances with new sanctions that include a proposal to cap the price of Russian oil.

The announcement came after Ukraine’s President Volodymyr Zelenskiy, addressing G7 leaders at their summit in the Bavarian Alps via a video link, asked for weapons and air defences to gain the upper hand in the war against Russia within months.

But efforts to rally the Global South to the Ukrainian cause were less successful, with five developing countries invited to partner with the rich country club signing up only to a mildly worded statement hailing democracy’s “courageous defenders” without referring explicitly to Russia’s invasion of Ukraine.

The G7 leaders’ own statement aimed to signal that its members were ready to back Ukraine for the long haul, at a time when soaring inflation and energy shortages – fuelled by Russia’s invasion – have tested the West’s sanctions resolve.

“We will continue to provide financial, humanitarian, military and diplomatic support and stand with Ukraine for as long as it takes,” the statement said.

After missiles rained down on Kyiv on Sunday, US national security adviser Jake Sullivan said the United States was readying a new weapons package for Ukraine that included long-range air defences and ammunition.

In reference to Zelenskiy’s address, Sullivan told reporters: “At the top of his mind was the set of missile strikes that took place in Kyiv and other cities across Ukraine and his desire to get additional air defence capabilities that could shoot down Russian missiles out of the sky.”

The G7 countries said they were ready to provide security commitments in a post-war settlement while stressing, after Ukraine had earlier voiced misgivings, that it was up to Kyiv to decide a future peace deal with Russia.

The G7 countries said they had also pledged or were ready to grant up to $29.5 billion for Ukraine.

The White House said on Monday that Russia had defaulted on its foreign sovereign bonds for the first time in a century – an assertion Moscow rejected.

G7 nations, which generate nearly half the world’s economic output, want to crank up pressure on Russia without stoking already soaring inflation that is causing strains at home and savaging the Global South.

“The dual objectives of G7 leaders have been to take direct aim at Putin’s revenues, particularly through energy, but also to minimize the spillovers and the impact on the G7 economies and the rest of the world,” a US official said on the sidelines of the G7 summit.

Western sanctions have hit Russia’s economy hard and the new measures are aimed at further depriving the Kremlin of oil revenues. G7 countries would work with others – including India – to limit the revenues that Putin can continue to generate, the US official said.

India has refrained from criticising Russia and provided a market for Russian oil, gas and coal as it sought to balance longstanding ties with Moscow and relations with the West.

While hosting the Indonesian president at the G7 summit, German Chancellor Olaf Scholz did not rule out boycotting the Group of Twenty summit in Indonesia in November if Putin attended.

India’s Prime Minister Narendra Modi is one of the five leaders of guest nations joining the G7 for talks on climate change, energy, health, food security and gender equality on the second day of the summit.

“It is good, important and necessary that we talk to each other,” Scholz said of the guest nations, which also included Argentina, Indonesia, Senegal and South Africa, hailing them as “democracies of the future.”

A US official said news that Russia defaulted on its foreign sovereign bonds for the first time since the Bolshevik revolution in 1917 showed how effective Western sanctions had been.

The Kremlin, which has the funds to make payments thanks to rich energy revenues, swiftly rejected the US statement, accusing the West of driving it into an artificial default.

The United States said it would also implement sanctions on hundreds of individuals and entities adding to the more than 1,000 already sanctioned, target companies in several countries, and impose tariffs on hundreds of Russia products.

The agencies involved would release details on Tuesday to minimize any flight risk, a second senior administration official said.

The Ukraine crisis has detracted attention from another crisis – that of climate change – originally set to dominate the summit. Activists fear Western nations are watering down their climate ambitions as they scramble to find alternatives to Russian gas imports and rely more heavily on coal, a dirtier fossil fuel, instead.

Japan is also pushing to remove a target for zero-emission vehicles from a G7 communique expected this week, according to a proposed draft seen by Reuters.