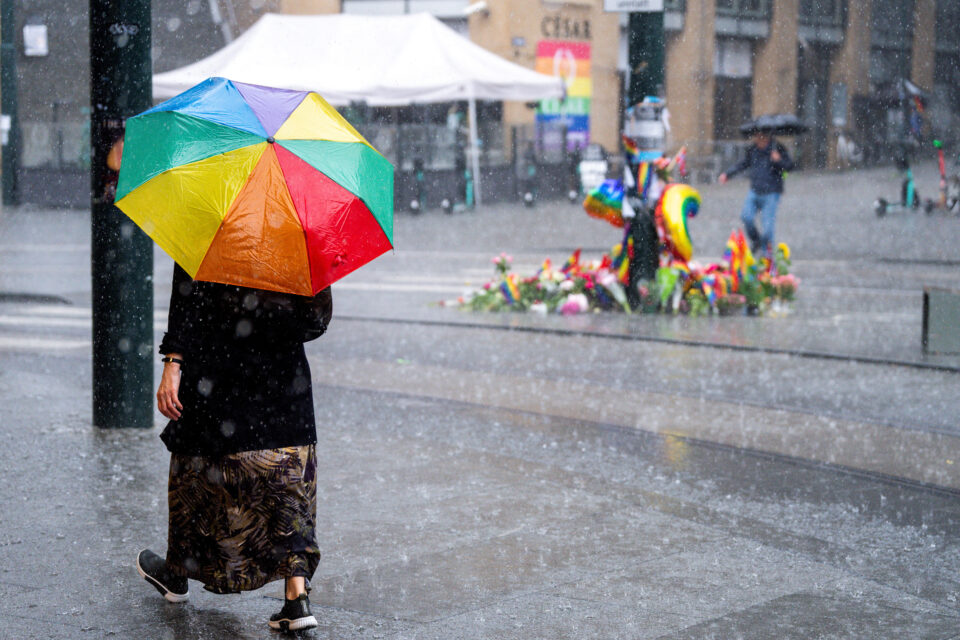 A woman walks with a rainbow-themed umbrella near the site of the recent deadly mass shooting at a gay bar in Oslo, Norway. Photo by Reuters

Norwegian police said on Monday all Pride events across the country should be delayed, citing security concerns after a deadly weekend rampage by a gunman at a gay bar in Oslo.

Police had initially approved a planned gathering outside Oslo Town Hall on Monday by the city’s LGBTQ community to honour the victims of the attack.

But they later advised organisers to cancel the event, which was expected to draw a large gathering. Norway raised its terrorism threat assessment to its highest level after Saturday’s attack, which left two dead and 21 wounded.

Pride events should be delayed “until further notice”, since the queer community is considered part of the “enemy” by extremist Islamists, National Police Chief Benedicte Bjoernland said in a statement.

Oslo Pride, one of the backers of Monday’s demonstration and the organiser of annual Pride celebrations that had been due to take place on Saturday, confirmed it would cancel the gathering.

“We are sorry that once again we have to say that a Pride event must be cancelled,” it said in a statement. “It is wrong, as the police claim, that this was meant to be a small event. We understand that people are now frustrated and still want to gather.”

Oslo’s district court on Monday named the suspect in the attack as Zaniar Matapour, a 43-year-old Norwegian citizen of Iranian origin.

Police described him as a radicalised Islamist with a history of mental illness.

The court ruled that Matapour could be detained for up to four weeks – a period that can be extended – during the investigation into the mass shooting. He will undergo a psychiatric evaluation as part of that, police said.

He was apprehended by passers-by who chased him down the street. Police arrived at the scene five minutes after receiving the first emergency calls and took him into custody.

Intelligence services said they knew of Matapour since 2015 and that he had been part of a network of Islamist extremists in Norway.

“Around 2015 we were worried about this person,” Roger Berg, acting head of PST, told private broadcaster TV2 on Saturday.

“We have followed him, to a degree. In more recent times, he was not one of the people we were the most worried about.”

His lawyer, John Christian Elden, did not respond to a Reuters request for comment.

He told TV2 it was not possible to draw any conclusions about the motives or reasons for the attack. “It is far too early to do so,” he said.

Matapour is accused of murder, attempted murder and terrorism. His response to the accusations is not known.

He moved to Norway as a child with his parents, became a father and for several years lived mainly off benefits, tabloid VG reported.