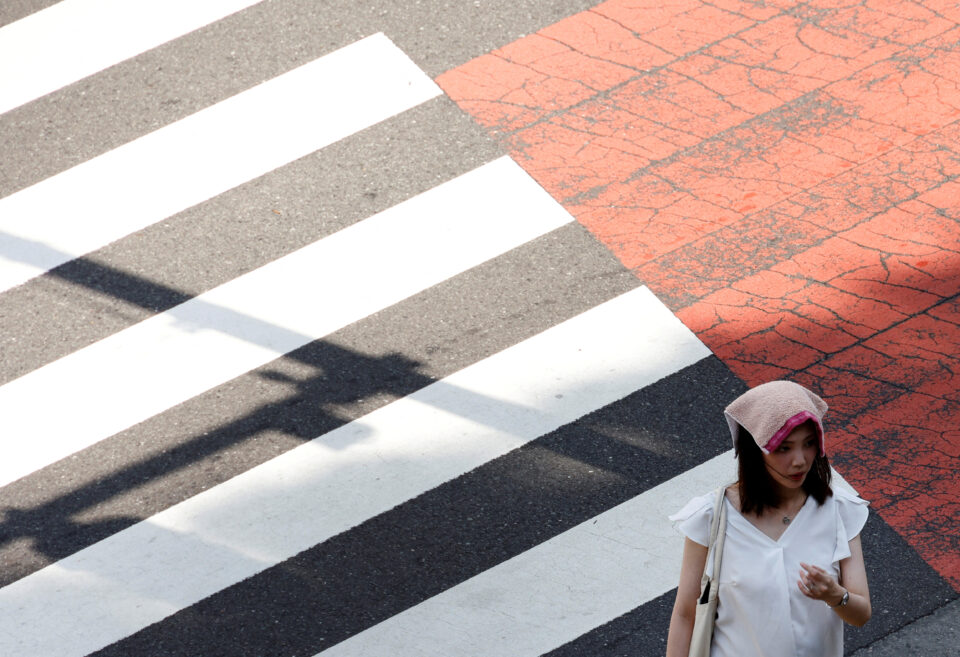 FILE PHOTO: A woman wears a handkerchief on her head during a heatwave in Tokyo, Japan, June 27, 2022. REUTERS/Kim Kyung-Hoon/File Photo

Japan baked under scorching temperatures for a fourth successive day on Tuesday, as the capital’s heat broke nearly 150-year-old records for June and authorities warned power supply remained tight enough to raise the spectre of cuts.

The heatwave comes less than two weeks before a national election in which prices, including the cost of electricity, are among key issues picked by voters in opinion polls that show the government’s approval rating slipping – with politicians including Tokyo’s governor urging power price cuts.

Temperatures in the capital hit 35.1 C by 1 p.m local time on Tuesday (0400 GMT), after three successive days of temperatures topping 35 C – the worst streak of hot weather in June since records began in 1875. And the heatwave isn’t about to break: the Japan Meteorological Agency forecast highs of 36 C for Tokyo on Thursday and 35 C on Friday.

With heatstroke alerts issued in some areas of the country for Tuesday, cases of hospitalisation rose early in the day. Many in the capital and elsewhere continue to flout government advice to reduce heatstroke risks by not wearing face masks outdoors – a legacy of more than two years of widespread mask wearing in public settings during the COVID-19 pandemic.

For a second day, authorities asked consumers in the Tokyo area to conserve electricity to avoid a looming power cut.

As of 9 a.m. local time, 13 people had been taken to hospital in the capital with suspected heatstroke, Fuji News Network said. At least two people are believed to have died from heatstroke, media said, prompting authorities to moderate their calls for power saving.

“Apparently there are some elderly people who have turned off their air conditioners because we are asking people to save energy, but please – it’s this hot – don’t hesitate about cooling off,” trade and industry minister Koichi Hagiuda told a news conference.

The reserve ratio for Tokyo during the evening (1630-1700) on Tuesday was expected to fall below 5% as of Monday evening, close to the minimum of 3% that ensures stable supply, in Tokyo and eight surrounding prefectures. Reserve capacity below 3% risks power shortages and blackouts.

On Tuesday, the Ministry of Economy, Trade and Industry (METI) said predictions had improved slightly, but still called for consumers to be economical with power use.

Monday’s warning prompted government offices, including METI, to turn off some lights in the afternoon and evening, with METI halting use of 25% of elevators in its building.

Electronics stores took similar steps, shutting off televisions and other goods on sales floors that would normally be kept on to lure buyers, and some Tokyo residents said on social media they were turning off all appliances not in use.

But politicians began to call for further steps.

Though expected to do well in the July 10 election for the upper house of parliament, Kishida’s ruling party faces headwinds from rising prices, worsened by a slide in the value of the yen that makes imports more costly.

The Kishida cabinet’s approval came to 50% in a voter survey conducted by public broadcaster NHK on June 24-26, down from 55% last week.

Natsuo Yamaguchi, head of the junior partner in Kishida’s coalition government, warned on Monday in a campaign speech that citizens were risking heatstroke by trying to economise on power.

“What I would really like is for the government to tell power companies to lower costs,” he was quoted by Kyodo news agency as saying.

“I’d like to contact the prime minister, who’s currently visiting Europe,” he added – a reference to Kishida’s attendance at the G7 summit, meaning the premier is out of the country during an election campaign period, a significant departure from usual practice.

“Scorching heat is said to boost private consumption during summertime through higher sales of beverages and home appliances … but excessive heat can curb consumption,” he added, noting that people stay indoors and vegetable prices rise.