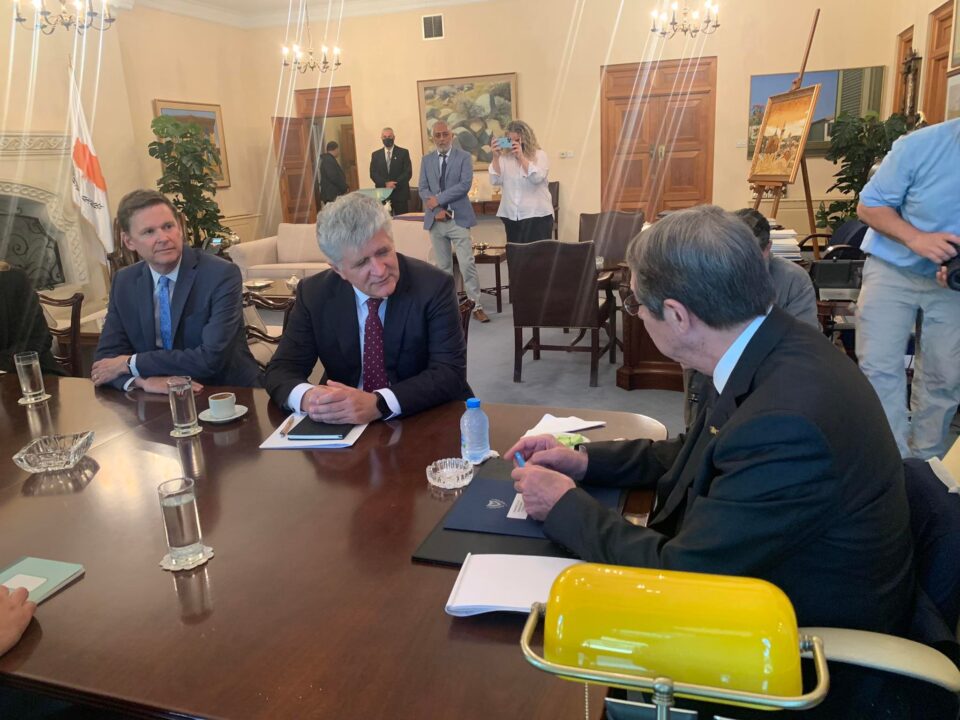 President Nicos Anastasiades said on Friday he was not aware that Turkish Cypriot leader Ersin Tatar would be handing over proposals to a UN official who met separately with the two leaders earlier in the day.

He said he would not comment on them until he had seen them himself.

Anastasiades on Friday morning met the UN’s Assistant Secretary-General for Europe, Asia, and the Americas Miroslav Jenča and reiterated the Greek Cypriot side’s positions, including readiness to resume Cyprus talks based on a bizonal bicommunal federation.

Jenča informed the president that following the instructions of the Secretary-General he was undertaking a fact-finding mission to ascertain how to establish the necessary conditions allowing for the resumption of talks based on UN Security Council resolutions and on the terms set by the Secretary-General’s mandate.

“What I would like to say is that we had a very good, productive meeting and we are going to continue,” he told the press after the meeting with Anastasiades.

During the meeting, Jenča and the president discussed the thorny issue of the appointment of a special envoy by UN. The Turkish Cypriot side has opposed to the appointment as it disagrees with the terms of the mandate.

They also discussed issues related to confidence building measures, following a statement by UNSG Special Representative Colin Stewart last week that trust was probably the single most important thing missing at the moment that was preventing a move forward on the Cyprus problem.

Anastasiades on Friday night when asked by the media whether the UNSG was appointing an envoy for Cyprus, said that instead of talking about the appointment of a special envoy, the role would be assumed through UN officials.

Asked if he was satisfied with his meeting and if he has conveyed what he wished, Anastasiades said he had but that the most important thing was that the UN  would try to create conditions for the resumption of talks through the general secretariat, meaning through officials and not through the appointment of special Cyprus envoys.

“Let us hope that the Turkish Cypriots will also realise, and Turkey in particular, which directs the Turkish Cypriots, that it is in everyone’s interest to move towards a solution, always on the basis of the resolutions of the UN, the Security Council, the European acquis,” he said.

During Jenča’s meeting with Tatar, the Turkish Cypriot leader presented his proposals for “the future cooperation of two states” under four pillars., and would submit two more, one on demining and one on immigration.

Tatar noted that the first of the issues concerned shared hydrocarbons exploration, second an electricity interconnecter with the EU through Turkey, thirdly joint solar energy projects and fourth, shared use of the island’s water resources.

“I expressed my readiness to advance this determination while maintaining our sovereign rights, equality and equal international status. I also asked the UN Secretary General to encourage Mr Anastasiades to consider our proposals in good faith,” said Tatar. “Now the ball is on the Greek side.”

Responding, Anastasiades said that nothing had been discussed along these lines during his meeting with Jenča. He had not seen the proposals and would not comment further until he had, he said.