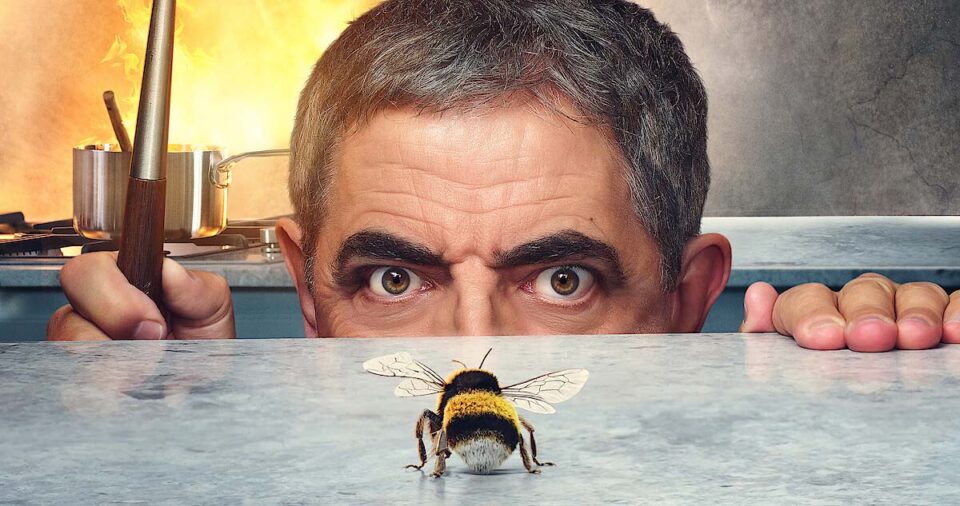 Originating from the Italian 16th-18th century theatre, the Commedia del’Arte, slapstick is exactly that: a stick that when struck gave the signal to the actors to slap, trip and otherwise cause minor pain to others for comedy’s sake.

While decreasing in popularity, slapstick comedy still shines here and there. Come on. Be honest. Don’t you just love someone being kicked in the nuts? No? Just me?

The genre had a minor resurgence last week, thanks to one of the few living actors today who is known for that kind of comedy. We all love Blackadder, but when asked ‘What is Rowan Atkinson famous for?’ there can be only one answer. Mr Bean.

Atkinson’s new Netflix show Man vs Bee has debuted, a title as honest as the above-mentioned ‘slapstick’. But there are more slapstick comedies to check out on Netflix.

Netflix is a treasure trove for Python fans: Life of Brian, Holy Grail, and the Flying Circus series are all on so you can feast upon Python to your heart’s content. If you are unsure or a novice to Python, you can always go with the Best bits (mostly).

True to their British origin, Month Python sketches are full of slapstick comedy and humour bordering on the surreal!

If I know two things about Monty Python’s sketches they are: 1) they are great and 2) the parrot is just resting. Norwegian Blue that is. Great plumage.

Liar, Liar is not the best Jim Carrey comedy. Not even in the Top 5. But since it is the only one available on Netflix, here we are. Jim Carrey is one of the few American actors who is famous for his physical comedy, having made a career out of it. Ace Ventura and The Mask are great examples of peak Jim Carrey, peak slapstick comedy in the US.

In Liar, Liar, Carrey plays a successful lawyer who lies all the time. So, a lawyer. One day his son makes a birthday wish, asking for his father to be unable to lie. Wish granted, wacky hijinks ensue.

Nothing beats the original. Following his massive success in the UK, Bean: the Ultimate Disaster Movie is the loveable clutz’s first attempt at an overseas career. Mr Bean, now working as a gallery employee, is accidentally sent to the US to accompany a valuable painting on loan and to give lectures on the matter. The whole movie, a huge commercial success, is Atkinson’s wacky character getting from scene to scene, disaster in his wake. Even if you are not a fan, it is a great movie to sit down and watch with kids!

Is the recommendation broad? Yes. Is it wrong? Nope. If physical comedy and juvenile humour are what you are after, you need not look further than Sandler’s comedies. Don’t Mess With the Zohan is the story of an Israeli special commando who becomes a hairstylist. Grown Ups, the wacky adventures of a group of school friends and their families. Just don’t throw any Uncut Gems or Hustle there by accident.

I’m going to be perfectly honest. Slapstick is not my thing and when I heard that Rowan Atkinson is dropping a series about fighting a bee, I almost gasped. How is it possible to stretch that premise into a series? It is barely a movie!

After having watched it I have to say that, well, it’s better than expected. Sure, not great, but still good if you enjoy Atkinson. The episodes are short, 10-15 minutes, and while they become repetitive (plot element introduced, Atkinson gets mad at the bee, bee vanquished, plot element twist, the bee is victorious) they are never tiresome. Plus, some surprising plot twists here and there and a bit of unexpected heart in an otherwise goofy comedy.

As far is the story is concerned, Trevor is a family man who agrees to home sit for a wealthy couple so he can take his family for a holiday. A bee comes in. He doesn’t like it. That’s it.

Government blamed for houses too close to beach