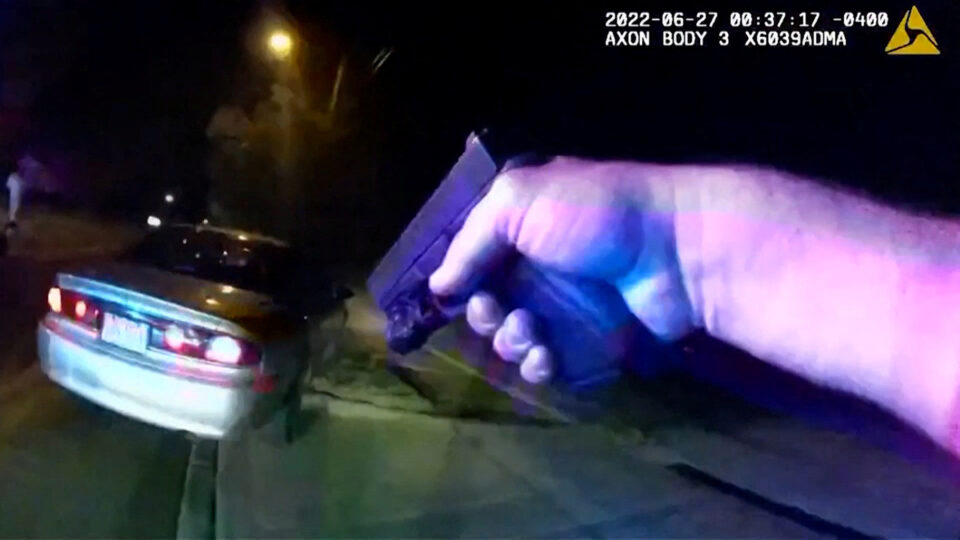 Video released on Sunday showed eight police officers in Akron, Ohio, were involved in a shooting that killed an unarmed Black man whose body was found with some 60 gunshot wounds after he fled a traffic stop last week.

Police played multiple videos at a news conference, one of which they said showed a gunshot being fired from the car driven by Jayland Walker, 25. He fled in his car after officers attempted to pull him over for a minor traffic violation.

After a chase of several minutes, Walker jumped out of the car and ran from police, the video showed. Police say it appears he was turning toward officers, who at the time believed he was armed. A gun was later recovered from his car.

On Sunday, the attorney for the Walker family, Bobby DiCello, told reporters he was “very concerned” about the police accusation that Walker had fired at officers from his car, adding that there was no justification for his violent death.

“They want to turn him into a masked monster with a gun,” DiCello said. “I ask you, as he’s running away, what is reasonable? To gun him down? No, that’s not reasonable.”

DiCello urged the public to be peaceful in protests against Walker’s killing, adding that it was the wish of Walker’s family to avoid more violence.

The shooting was the latest in a spate of killings of Black men and women by law enforcement in the United States that critics say are racist and unjustified, including the 2020 murder of George Floyd in Minneapolis that ignited global protests against police brutality and racial injustice.

On Sunday, the Akron NAACP led a peaceful protest at city hall. Hundreds of demonstrators marched in the streets of the city of about 200,000 people, waving “Black Lives Matter” flags and chanting, “We are done dying,” and “Justice for Jayland.”

Akron police did not immediately respond to a request for comment.

It was not clear how many bullets struck Walker, but the body camera video shows police firing scores of rounds at him.

The medical examiner is still determining how many of the 60 wounds were entrance versus exit wounds, Akron Police Chief Stephen Mylett said.

Mylett said officers had tried to give Walker first aid after he was shot, but he was declared dead at the scene.

The eight officers directly involved in the shooting have been placed on paid administrative leave, Mylett said, and they have not made any individual statements.

The officers said they had believed Walker was “moving into firing position” when he got out of his car, prompting them to react to him as a potential threat, Mylett said.

Police also pointed to what appears to be a flash of light on the driver’s side of Walker’s car in the video, which they said was a muzzle flash.

Ohio’s Bureau of Criminal Investigation, which is investigating the shooting, has not confirmed any of these details.