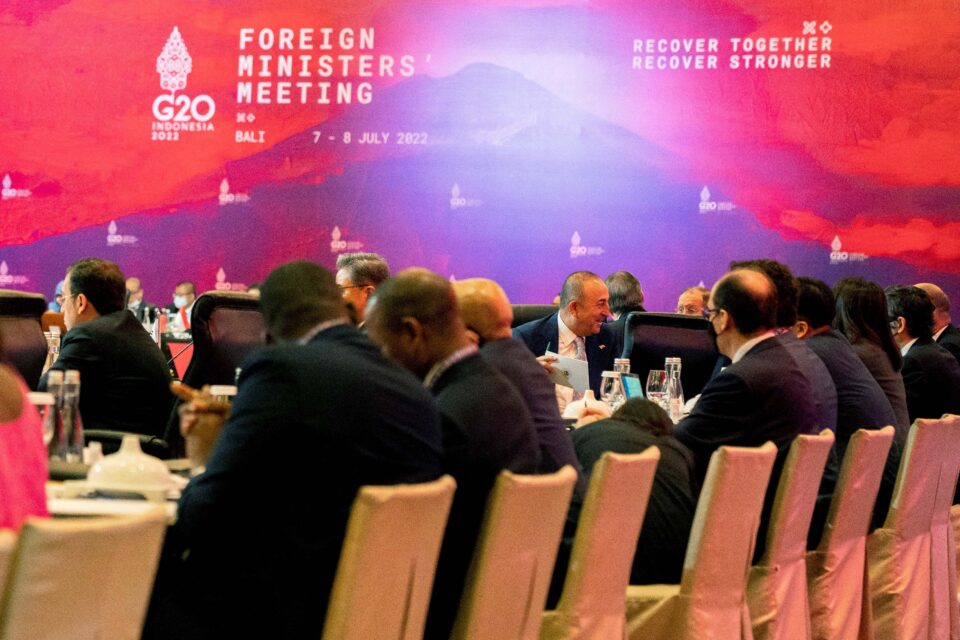 The opening session of the G20 Foreign Ministers' Meeting in Nusa Dua, Bali

Ukraine urged its allies to send more weapons as its forces dig in, hoping to stall Russia’s military advance through the eastern Donbas region, while Ukraine‘s chief negotiator said a turning part was approaching in the conflict.

Signalling that the Kremlin was in no mood for compromise, President Vladimir Putin said sanctions against Russia for the invasion it launched in February risked causing “catastrophic” energy price rises. Read full story

His top diplomat, Sergei Lavrov, clashed with his Western counterparts at a G20 meeting in Indonesia, where they urged Russia to allow Ukraine to ship its blockaded grain out to an increasingly hungry world. Read full storyRead full story

Russia’s envoy to Britain, meanwhile, offered little prospect of a pullback from parts of Ukraine under Russian control.

Ambassador Andrei Kelin told Reuters that Russian troops would capture the rest of Donbas in eastern Ukraine and were unlikely to withdraw from land across the southern coast.

Ukraine would eventually have to strike a peace deal or “continue slipping down this hill” to ruin, he said. Read full story

On the front lines in the eastern region of Donbas, Ukrainian officials reported heavy Russian shelling of towns and villages ahead of an anticipated push for more territory.

A Ukrainian infantry unit on the road to the town of Siversk, whose members spoke to Reuters, had set up positions on the edge of a deep earth bunker covered with logs and sandbags and defended by machine guns. Read full story

In the Russian-occupied parts of the Kherson and Zaporizhzhia regions in the south, Ukraine‘s deputy prime minister urged residents to evacuate before Ukrainian forces launch a counter-offensive.

“Please leave – our army will begin retaking these areas. Our determination is rock solid. And it will be very difficult later to open humanitarian corridors when children are involved,” Iryna Vereshchuk was quoted as saying by Ukrainian media.

Mykhailo Podolyak, the Ukrainian chief negotiator in stalled talks with Moscow, said Russia’s military had been forced to take an operational pause due to losses and to resupply.

“It is clear that they have to redeploy things, bring forward new troops and weaponry, and this is very good. A certain turning point is beginning to take shape because we are proving we are going to attack storage facilities and command centres,” Podolyak told Ukraine‘s 24 Channel television.

Ambassador Kelin’s remarks gave an insight into Russia’s potential endgame – a forced partition that would leave its former Soviet neighbour shorn of more than a fifth of its post-Soviet territory.

An escalation of the war was possible, Kelin said.

Ukrainian officials, echoing comments by the deputy commander of the infantry unit outside Siversk, said they needed more high-grade Western weapons to shore up defences.

Zelenskiy on Twitter thanked Biden for the HIMARS and shells, which he said were priority needs.

The United States started providing the precision rocket weapon system to Ukraine last month after assurances it would not use them to hit targets in Russia. Kyiv has attributed battlefield successes to the HIMARS.

“When they came in, the Russian war machine could instantly feel its effect,” Oleksiy Danilov, secretary of the National Security and Defence Council, told Reuters. More Western military aid was vital, he added. Read full story

At the meeting of G20 foreign ministers, U.S. Secretary of State Antony Blinken led efforts to press Russia. He was meeting China’s foreign minister, Wang Yi, on Saturday and was expected to repeat warnings to Beijing not to support Russia’s war.

On Friday, Lavrov walked out of a meeting, denouncing the West for “frenzied criticism”.

High on the list of G20 concerns is getting grain shipments from Ukraine out through ports blocked by Russia’s presence in the Black Sea and mines. Ukraine is a major exporter, and aid agencies warn that many developing countries face food shortages if supplies fail to reach them.

“‘Ukraine is not your country. Its grain is not your grain. Why are you blocking the ports? You should let the grain out’,” the official cited Blinken as saying.

Since Russia started in February what it calls a special operation to demilitarize Ukraine, cities have been bombed to rubble, thousands have been killed, and millions displaced.

Ukraine and its Western allies say Russia is engaged in an unprovoked land grab.

Russian forces have seized a big chunk of territory across Ukraine‘s south and are waging a war of attrition in the Donbas, the eastern industrial heartland made up of Luhansk and Donetsk provinces.