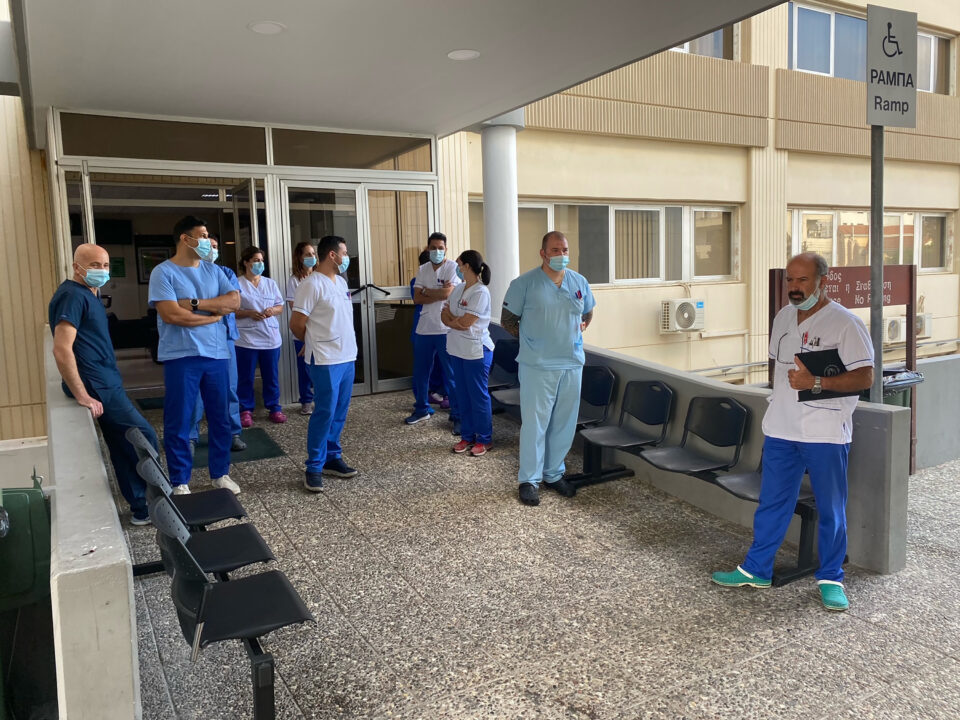 The upsurge in coronavirus cases in the past two weeks is creating strife in the health service as authorities scramble to reopen Covid wards and increase the number of beds, which on Saturday sparked a lightning strike by nurses at Larnaca general when some were abruptly seconded to the reference hospital in Famagusta.

Speaking to reporters during a visit to Latsia health centre’s on-duty clinic, Health Minister Michalis Hadjipantela did not rule out the reinstating of more coronavirus measures, just a day after the reintroduction of face masks indoors and only a month after they were ditched.

Responding to a comment that Cyprus was the first to reinstate face masks, he also made the prediction that more countries will follow as cases worldwide continue to climb.

Asked whether more measures were to follow, the minister said that a meeting with the advisory team on coronavirus has been arranged for the coming week where the matter will be discussed.  “We will evaluate the situation until the very last moment, and we will make decisions accordingly”.

Meanwhile, nurses at the Larnaca general hospital called a six-hour work stoppage at 8am after order came late Friday for the sudden transfer of four nurses to the Famagusta hospital.

Speaking for the striking nurses, Andronikos Andronikou told CNA, that instead of staff being reinforced at the Larnaca hospital, “they came last night at 22:00 with a dictatorial order saying that this morning four people had to leave to reinforce another hospital.”

“This can’t happen. Larnaca hospital has been depleted of nursing staff,” he said, adding that if there was no positive response today, they would escalate measures from Monday.

State health services organisation (Okypy) spokesman Charalambos Charilaou told the Cyprus News Agency that the Covid ward at Larnaca hospital would be closing and the nurses transferred to Famagusta hospital.

He explained this was part of Okypy’s arrangements to deal with increasing hospitalisations of Covid patients. According to Charilaou, Nicosia, Limassol and Famagusta hospitals will allocate more beds for Covid patients, while the Covid ward at Paphos hospital will reopen.

In addition, the Covid ward at Larnaca hospital will close, with some staff members moved to Famagusta hospital.

“It should be noted that for two weeks at the Larnaca general hospital there were ten beds for patients who were hospitalised for other reasons but were also Covid positive, but only one or two of these were in use,” he said.

Charilaou told Cybc that at the moment 102 people are being treated in hospitals, and that 150 beds are needed.

According to Hadjipantela, a private hospital in Nicosia has also offered up 30 beds for Covid treatment.

He also refused to comment on the spontaneous strike, telling reporters that he would prefer to be formally informed of such matters before responding.

Andronikou said the only staff on the wards during the six-hour stoppage would be security personnel. “No nursing care will be provided and nurses will only respond to emergencies and the medication of patients. “We will not abandon our patients,” he assured.

Andronikou said the striking nurses felt like Okypy’s move was doing irreparable damage to Larnaca hospital, insisting that its staff had repeatedly warned the organisation of understaffing among the nurses and beyond.

“All of our suggestions, all of our concerns, fell on deaf ears,” he said, adding that the staff believe that Okypy is “leading the hospital into a complete deconstruction with the aim of closing it down”.

He also called on Larnaca residents to act “if they want to have a hospital in their district,” pointing out that tourists will suffer too if it closes.

Andronikou said that the Larnaca hospital has 371 nurses, of whom 13 are in another hospital. Of the 358 remaining, an additional 13 are absent due to illness, Covid or parental leave.

He also cited an Okypy study which said that according to the number of beds at the hospital, it would need 15 additional staff members to operate normally. “On top of that, we would need an extra 32 people to operate in the way Okypy wants us to”.

Speaking on behalf of nurses’ union Pasyno, Larnaca hospital nursing officer Theodoros Trapelis, he said the staff “were taken by surprise with Okypy’s unexpected decisions, which have caused great upset”.

He said that while it was clear that Covid has created unprecedented conditions for hospitals, studies from the union and Okypy established that the specific hospital does not have the capacity to offer its staff elsewhere but rather needs to hire more staff.

Later on in the day, the union issued a press release decrying the decision to move staff across hospitals.

“We are witnesses to a situation where final decisions are taken overnight and without us being informed and discussing the issue,” the statement said. “Unfortunately, [Okypy’s] business plan has been irreparably exposed once again, since it continues to prefer and follow a tactic of deciding and demanding”.

“As a union we understand that both sides should agree on any decisions made, as they have to do with the safety of hospitals, both for staff and patients”.

Pasyno suggested a meeting with Okypy and hospital management departments in order to strike a middle ground.

It also said it was tentative about taking any further measures as it believes that “adequate staffing of hospitals will allow the provision of quality and safe conditions to the staff, always with the patient in mind”.

Rogers services restored for majority of customers after Canada-wide outage