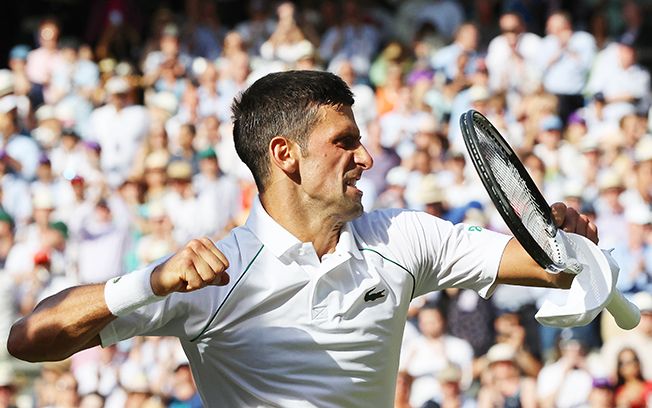 Novak Djokovic has contested 31 Grand Slam finals and faced just about every scenario possible in collecting 20 titles but even he will not know what to expect in Sunday’s Wimbledon showdown against Australian showman Nick Kyrgios.

The 35-year-old Serbian, bidding for a fourth successive title, will prepare for every eventuality but the likelihood is that world number 40 Kyrgios will still conjure up some surprises.

It could be an underarm serve played between the legs on the first point of the match, a tweener drop shot from the baseline on a break point or picking a fight with a fan.

But Djokovic will know that amidst all the theatre and bravado, Kyrgios possesses a lethal range of grasscourt weapons that threaten to end his 27-match unbeaten run at Wimbledon and wrench the title from his grasp.

He will start as favourite but, significantly, in their only two previous meetings, both in 2017, Djokovic did not win a set, did not break the Kyrgios serve and had only one break point.

Djokovic is regarded as the best returner in the game, perhaps of all time, but such is the potency and disguise of the Kyrgios delivery that, if it is firing, the defending champion’s patience will be tested to the maximum and opportunities will be fleeting.

“I guess it’s going to be a game of small margins,” said Djokovic, who is bidding for a seventh Wimbledon crown.

“His motion for the serve is so fluid and just very quick. He can hit any angle really. He tosses it forward so he can come in, serve and volley. He puts himself in a great position to be aggressive or to stay back.

“It’s tough to read. I haven’t practised with him or played with him since the last time I lost to him.”

The reason for that is that there was very little love lost between the pair until a sudden thawing of their relationship this year after Kyrgios’s public support for Djokovic when he was deported from the Australian Open for not having a COVID-19 vaccination.

Kyrgios once labelled Djokovic a “tool”, said he had a “sick obsession” with wanting to be liked and described Djokovic’s trademark post-match celebration as “cringe-worthy”.

Djokovic once said he had little respect for Kyrgios off the court but ahead of Sunday’s final something of a bromance has developed between the two.

“Honestly, as a tennis fan, I’m glad that he’s in the finals because he’s got so much talent,” Djokovic said.

For the first week of the tournament Kyrgios seemed happy to assume his usual role of pantomime villain, fined for spitting towards a fan after a first-round five-setter against Paul Jubb, then again for his behaviour in a toxic win over Stefanos Tsitsipas, who afterwards called him a bully.

Since then, Kyrgios has shown a game face few believed he possessed — coming though a five-setter against Brandon Nakashima, then easily disposing of Cristian Garin without an audible expletive and barely a trick shot.

He got a huge break when Rafa Nadal was forced to withdraw ahead of their eagerly-awaited semi-final because of injury, and will now seek to become the first Australian man to win a Grand Slam singles title since close confidant Lleyton Hewitt won Wimbledon in 2002.

The big question now is how will he react to the occasion?

Nerves and adrenaline could ignite the old volatility but if Kyrgios harnesses the unique shot-making ability that some describe as genius, Sunday could be the day that tennis’s enfant terrible becomes the new king of Centre Court.

“I feel like it’s the pinnacle of tennis,” he said. “I never thought I’d be here. I’m just super proud and I’m just ready to go. I’m going to give it my all and we’ll see what happens.”