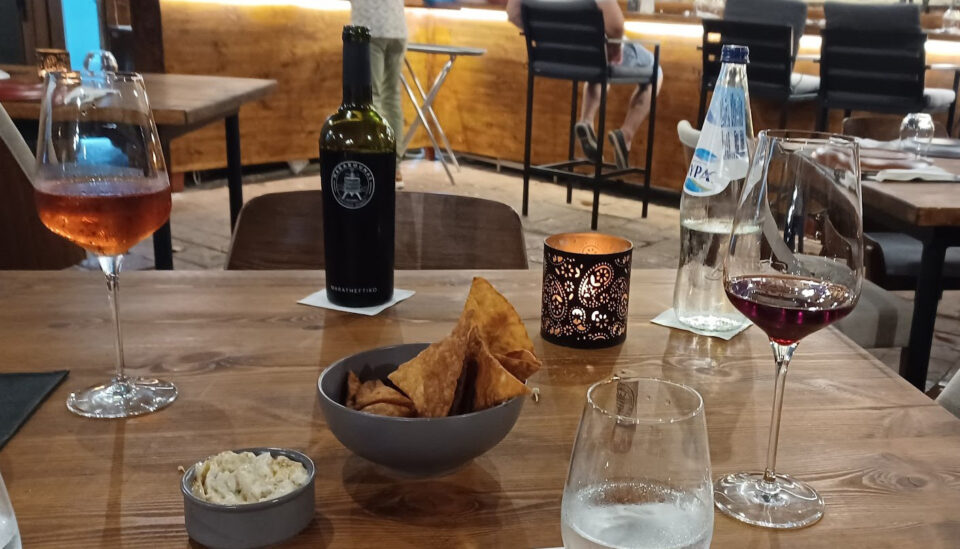 The Porterhouse is a somewhat recent addition to Limassol’s culinary scene but quickly caught my attention, although pictures of beautifully marbled cuts of beef tend to do that without much effort. We deliberately parked a short walk away, despite the warm and humid evening, and walked through the quaint cobblestone alleys to find the restaurant right at the core of Mesa Geitonia’s cultural centre.

While renovated and modern in all the ways you would want from any establishment, its styling and decor blend beautifully with the character of the area and the surrounding buildings. Indeed, wood meets stone to form the dominant theme, while a splash of graffiti betrays the fact that unlike other steakhouses in Limassol, the Porterhouse opts for a more casual and unpretentious demeanour. Moreover, the courtyard is covered by a hybrid canopy of numerous plants, including jasmine and what I believe was a particularly substantial bougainvillea. Upon entering this area, you are greeted with the sound of blues music. For the fans of the genre among you, songs by Champion Jack Dupree, Keb’ Mo’ and Buffalo Nichols formed part of the repertoire during our visit.

The waiter brought us a portion of fried tortilla chips, along with a yoghurt dip, something which all tables get and are complementary. The dip, which aside from the yoghurt also contains spring onions and red chilli, is a perfect match for the chips, cool, finely balanced between being sour and mild, with a pleasant kick.

In terms of drinks, we tried the Rose de Xinomavro by Thymiopoulos Vineyards, which was light, crisp and sweet, perfectly suited to the weather on the night. We also tried the 2016 Maratheftiko by Makarounas Boutique Winery, which, while perhaps more befitting to a cooler climate, was also very nice, sweet and easy on the palette. 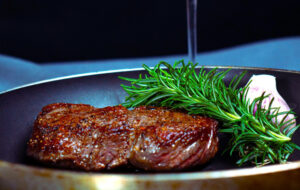 We both opted for ribeye steaks, being one of the juicier and more marbled cuts. The restaurant makes no qualms about pulling the curtain back on the cooking process, as you can see the chefs work their magic throughout the cooking process. So much so, without leaving our table we saw the exact moment our steaks left the grill before being brought over by the waiter two seconds later. One little note here is that while the steaks were perfectly great upon receiving them, they will become progressively better if you wait a few minutes, that’s if you are disciplined enough. Each steak comes with a side and if neither of you is particularly ravenous the two sides should be enough for two people to share. We opted for the fresh-cut fries and grilled vegetables, the latter of which contained aubergines, zucchinis, red peppers and mushrooms, which were all lovely. We also ordered a side salad which was simple, fresh and cool.

For dessert, there are only two options, the milk chocolate cheesecake with passion fruit sauce, or homemade ice cream. We tried one of each and both provided a nice bookend to the night. All in all, a pleasant experience and one I would be happy to repeat in the future.