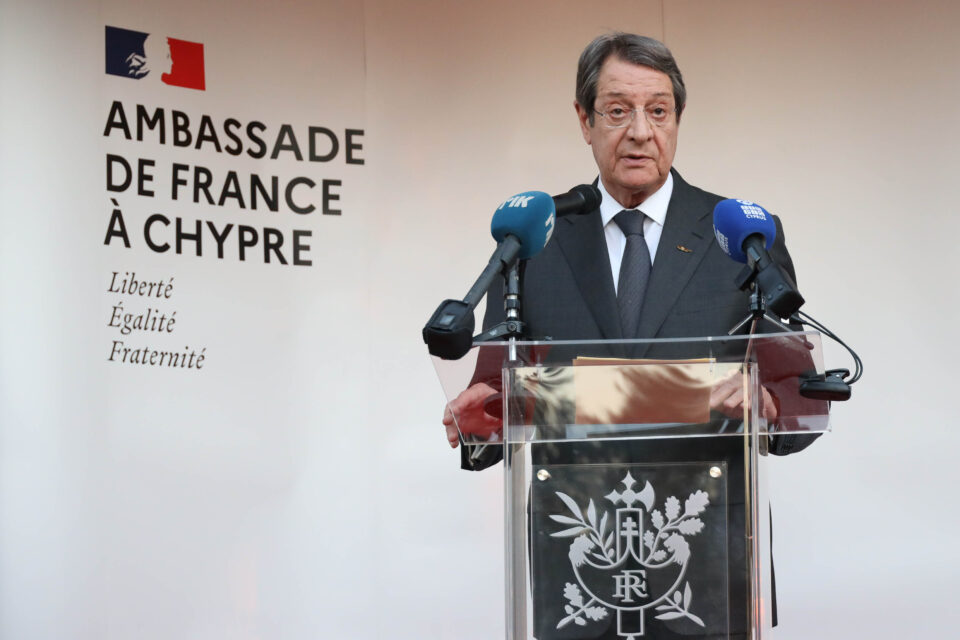 France is, and will remain, one of Cyprus’ closest allies, said President  Anastasiades during the celebration of the Bastille Day at the French Ambassador’s residence in Nicosia and asked for all its support for the resumption of meaningful negotiations to reunify Cyprus.

Wishing French Ambassador Salina Grenet-Catalano a quick and smooth recovery from Covid-19, President Anastasiades said that the events of 1789 initiated the introduction of the ideas of freedom, equality and fraternity and the establishment of the rule of law, adding that the French Revolution did not only reshape France but soon thereafter resonated in Europe and had a long-lasting impact on European history.

“Nowadays, if one thinks of the Charter of Fundamental Rights of the European Union, they will realize that many of these, such as the right to freedom, dignity, equality, and solidarity, stem back from the fundamentals of the French revolutionary era of the eighteenth century”, he stressed.

“France did an outstanding job and produced an enormous amount of work, for which you must be very proud”, said the President.

President Anastasiades also expressed his satisfaction with the development of strong bilateral relations in all areas between Cyprus and France and of a solid network of cooperation in the European Union, as well as in a variety of multilateral fora, including the UN Security Council

He referred to examples of this cooperation, such as the importance that France attaches to the Eastern Mediterranean, “something demonstrated, inter alia, through the French participation in regional initiatives that promote cooperation between the countries of the region, including the East Med Gas Forum”, TOTAL’s involvement in Cyprus’ exclusive economic zone as “a vote of confidence in Cyprus’ Energy Policy which is always in strict adherence to international law”, the recent resumption of TOTAL & ENI’s exploration activities, after the short break because of the pandemic, expressing the hope that “new discoveries will bring us even closer to realizing our vision of creating, together with neighbouring countries, a strategic Energy Corridor from the Eastern Mediterranean to Europe”.

Anastasiades stressed also the “practical partnership” the two countries have forged in the defence sector, with the aim of enhancing stability and diminishing threats to peace and security in the entire East Med and Middle East region, while he also expressed his appreciation for the regular naval presence of France in Cyprus and referred to the agreement to purchase of a number of Airbus Helicopters that will be operated by the National Guard, “always for defensive purposes”.

In addition, he also referred to the operation of the French-Cypriot School in Nicosia, which this year celebrates 10 years since its establishment and the launching of a new branch in the city of Limassol.

Concluding, President Anastasiades expressed his gratitude to France for its full solidarity towards the Republic of Cyprus and its steadfast support in reaching a fair, functional and viable solution to the Cyprus issue, “which remains an open wound in the heart of Europe”, in line with UN Security Council resolutions, and the acquis communautaire.

“France is, and will remain, one of our closest allies and we look eagerly to a continued friendship and close cooperation with you”, concluded the President.

France is ready to support any step in the direction of a re-united Cyprus, said the First Counsellor of the Embassy Virginie Corteval speaking on behalf of the French Ambassador to Cyprus.

Corteval said that despite the celebrations this was hardly a happy day. War had returned to the heart of Europe with Russia’s unprovoked and unjustifiable aggression against Ukraine, she said. There was hope, however, stemming from the incredible resilience and resistance of the people of Ukraine, the united and strong reaction of the European Union and its partners and the decision to grant Ukraine and Moldova EU candidate status.

Corteval said that the Ukrainian drama showed there was no time to waste in looking for a lasting and viable peace in Cyprus, since frozen conflicts remained wounds to be healed.

“The status quo in Cyprus is hardly a status quo. The situation is changing, and not necessarily for the better: from the questioning of international norms in Varosha to the looming threats in the Cypriot Exclusive Economic Zone, from the difficult economic conditions and restricted rights Turkish Cypriots are experiencing to the high levels of migration taking place through the Green line”, she said.

Corteval said that the past year has also been very important for the deepening of the bilateral relationship between Cyprus and France, citing the field of defence and security and the recent decision of Cyprus to purchase six state-of- the-art helicopters from Airbus, hence contributing to the reinforcement of European Defence.  She also thanked the Republic of Cyprus for welcoming French ships in its ports.