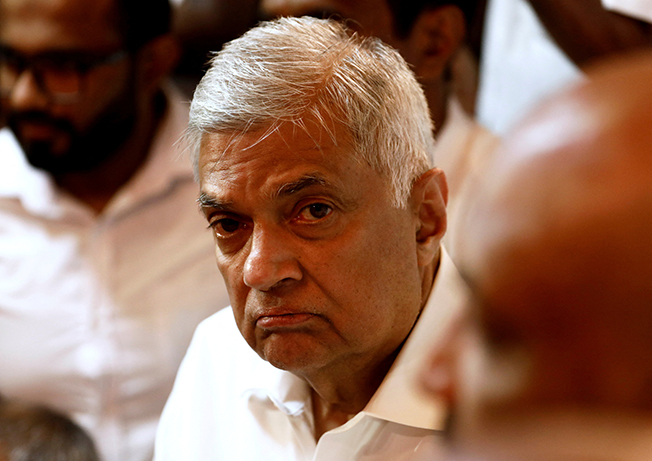 The six-time prime minister garnered 134 votes in the 225-member parliament, despite public anger with the ruling elite after months of severe shortages of fuel, food and medicines

Sri Lankan lawmakers voted in acting President Ranil Wickremesinghe as the new president on Wednesday, hoping his long experience in government would help pull the country out of a crippling economic and political crisis.

The six-time prime minister garnered 134 votes in the 225-member parliament, despite public anger with the ruling elite after months of severe shortages of fuel, food and medicines.

“Our country is facing massive challenges and we have to work on a new strategy to fulfil the aspirations of the people,” the 73-year-old leader said after his victory. “Now everyone must come together.”

The response of protesters was broadly muted, with just about 100 people gathered on the steps of the presidential secretariat, but some vowed to turn their focus to dislodging Wickremesinghe.

“We’re shocked. He’s a person handling things in a very cunning way,” protester Damitha Abeyrathne said of the leader. “He will start controlling us in a different way. As protesters, we will start our struggle again.”

Many of the hundreds of thousands who poured into the streets to force the ouster last week of previous president Gotabaya Rajapaksa had wanted Wickremesinghe gone too, labelling him an ally of the Rajapaksa family.

But one organiser of previous protests, Chameera Dedduwage, said Rajapaksa’s removal had been one of the movement’s goals, and protesters would have to be satisfied with achieving it.

“Unlike GR, Ranil is not a populist: he’s known to be a ruthless pragmatist,” Dedduwage said, referring to Rajapaksa by his initials.

Wickremesinghe took over as acting president last week, after Rajapaksa fled on a military plane to the Maldives before taking a commercial flight to Singapore.

Two lawmakers did not attend the session and four votes were ruled invalid.

Alahapperuma, although more acceptable to the protesters and the opposition, has no experience of governance at the top in a country desperate for an IMF bailout as it has barely any dollars to buy imports.

The IMF was looking forward to engaging with Sri Lanka’s new leadership, Managing Director Kristalina Georgieva told the Nikkei newspaper before the vote.

“The moment there is a government that we can continue our discussions with, our team will be there,” she said, adding that she was “very hopeful” of completing program negotiations as quickly as possible, with some good technical groundwork done.

Before the vote, Wickremesinghe said by the time he joined the Rajapaksa government as prime minister in May, the economy had already collapsed.

Since then, daily power cuts had been reduced to three hours from five and fertiliser distributed to farmers suffering from an earlier ban on the commodity, he added.

Wickremesinghe had unsuccessfully ran for president twice before but secured enough backing this time from lawmakers despite controlling just one seat, as leader of the United National Party.

“This is now an outdated parliament with a mandate given for an ousted president,” said opposition leader Sajith Premadasa.

However, he added, “You can’t have an anarchical country. We must work according to the constitution. As the opposition, we will give our utmost support” for any plan to fix the economy.

The tourism-dependent economy was hammered first by the COVID-19 pandemic and then a fall in remittances from overseas Sri Lankans. The ban on chemical fertilisers hit output before it was reversed late last year.

Petrol has been severely rationed. Headline inflation hit 54.6% last month and the central bank has warned that it could rise to 70% in coming months.

“People deserve fuel, transportation, we deserve anything citizens need,” said Kasumi Ranasinghe Arachchige, 26. “Until we see no one in Sri Lanka is struggling, the protest continues.”

Another protester, Buwanaka Perera, said, “The occupy movement shall continue, the struggle shall continue. We will continue the protest until Ranil goes home.”

Making the most of your holiday to Cyprus