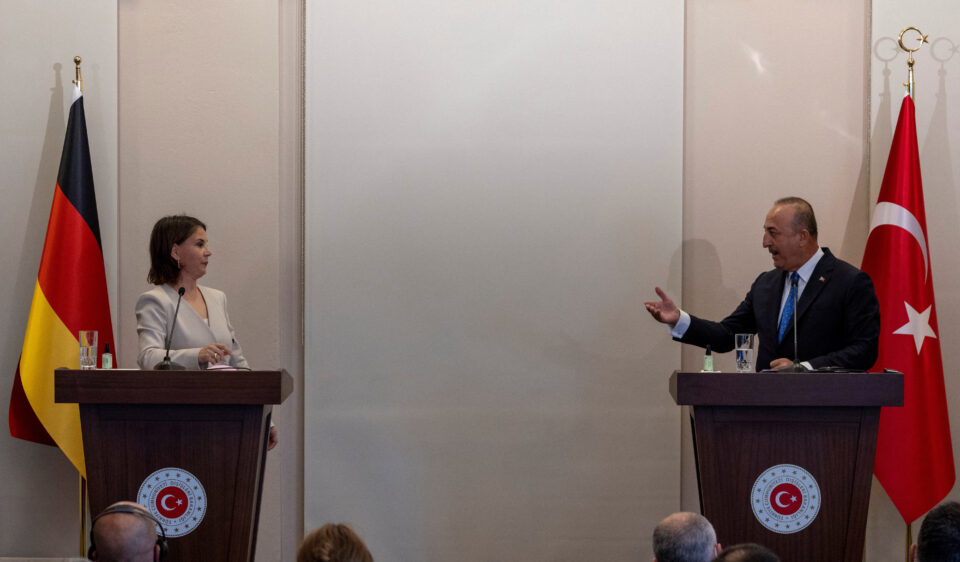 Turkey lashed out left and right on Friday, accusing Germany of losing impartiality in its role as mediator between Turkey, Greece and Cyprus, and also blasting the decision by the UN Security Council to extend the mandate of the UN peacekeeping force in Cyprus as “unfair and unrealistic”.

The Turkish and German foreign ministers argued over a range of issues in a tense and drawn-out news conference on Friday, trading barbs over disputes between Ankara and Athens, jailed Turkish philanthropist Osman Kavala and Kurdish militants.

The news conference, which began an hour later than scheduled and ran for an hour, started off with calm remarks by the two ministers but became increasingly testy as they criticised each other’s policies.

“We want Germany to maintain its balanced stance in the issue of east Mediterranean and the Aegean. Third countries, including Germany, should not be a tool to provocation and propaganda especially by Greece and Greek Cypriot side,” Turkish Foreign Minister Mevlut Cavusoglu said.

Speaking at the tense news conference alongside German counterpart Annalena Baerbock in Istanbul, Cavusoglu said Berlin needs to listen to both sides without prejudice.

Greece and Turkey have long-running disagreements over a range of issues, from conflicting Mediterranean maritime claims to air space and migration. On Thursday, Greece and Cyprus accused Ankara of stoking tensions as Ankara prepared to dispatch a drill ship to the Mediterranean next month in a search for natural gas.

Baerbock also visited Athens for a meeting with Foreign Minister Nikos Dendias where they discussed the issue of German reparations, and also of the exports of German submarines to Turkey.

But the German minister made it clear that the Aegean islands were Greek. “The Aegean islands are Greek territory and no one has the right to dispute this,” the German foreign minister clarified. “My own government will not allow there to be any doubt that we stand in solidarity,” Baerbock added.

In his comments, Dendias said that the Greek position was clear on the sale of submarines to Turkey. “These submarines risk changing the balance of power,” he said, recalling that Turkey, although a member of Nato threatens Greece with war, violates its sovereignty and sovereign rights and illegally occupies the territory of Cyprus, an EU member state.

Dendias said Greece has the same submarines, but “it does not threaten its neighbours and is not a revisionist power”.

Earlier, Turkey’s foreign ministry characterised the decision by the UN Security Council to extend the mandate of the UN peacekeeping force in Cyprus as “unfair and unrealistic”.

Meanwhile in Nicosia, Cypriot Foreign Minister Ioannis Kasoulides said Cyprus was doing everything it could so as not to “give up the Turkish Cypriots to Turkey”. But he also cautioned that it was up to the Turkish Cypriots as well to decide whether they envision living in a reunited Cyprus, a member of the European Union and the United Nations, or whether they want to become a political offshoot of Turkey.

Kasoulides, addressing the closing of the Conference of Overseas Cypriots in Limassol, said the Cyprus issue was once again at a critical crossroads, but even more critical than before. He said the government had repeatedly expressed the will to resume talks immediately.

“We know that Cyprus belongs to the Cypriot people consisting of Greek Cypriots, Turkish Cypriots, Maronites, Armenians and Latins and we are trying to do everything we can not to give the Turkish Cypriots to Turkey,” Kasoulides said.

He added that, during his visits abroad in the last seven months, he has not seen a slide in positions on the Cyprus issue nor any objections to the Greek Cypriot side for a two-state solution, but only support on the agreed basis.

Kasoulides stressed that the government has demonstrated its commitment to the effort to cultivate a positive climate between the two communities and expressed the certainty that the acceptance of the Confidence Building Measures (CBMs), proposed by President Nicos Anastasiades would have a mutual benefit for both sides.

However, he said, the Turkish Cypriot side was ignoring the will of its own people who rejected the latest protocol signed with Ankara that many saw as a step toward annexation with Turkey.

Record increase in price of villas in the north