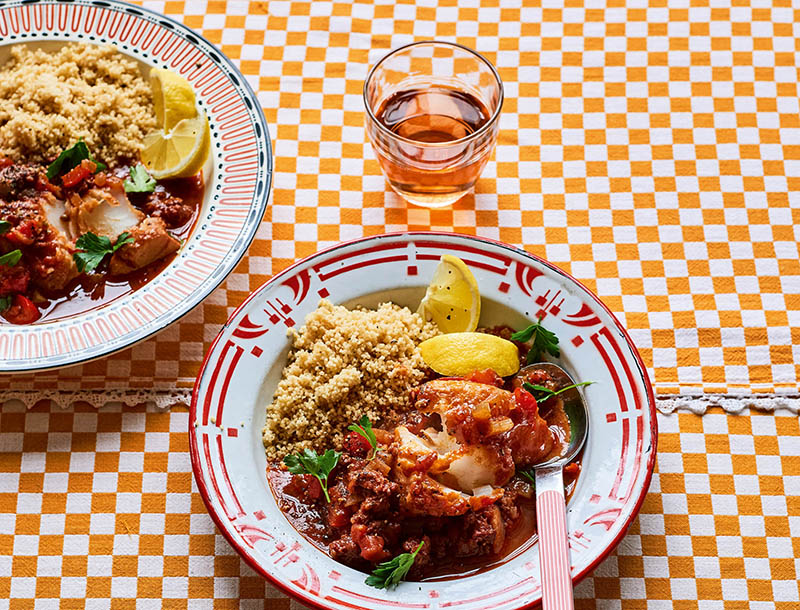 Think Sophie Ellis-Bextor and you probably start humming early-Noughties hit Murder On The Dancefloor, or remember the unadulterated joy she brought during lockdown with her live ‘kitchen discos’ on Instagram – performing tunes in sequinned outfits in her family playroom, often stepping over toys, children and wires.

But you may not know that her talents extend to the kitchen too.

In fact, when she first met her husband Richard Jones (bassist from pop band The Feeling), a mutual love of cooking was one of things they bonded over.

“We wooed each other with food really,” says Ellis-Bextor – her ability to cook a great piece of meat even coaxed Jones off the pescatarian wagon on an early date in 2002.

“She cooked me duck!” Jones interludes.

“Because he already ate fish, I thought maybe we can go to the surface of the water,” says the 43-year-old singer, laughing.

Being a good cook isn’t that different to being a good musician, insists Jones. “Putting in various elements, like the drums, bass, percussion and vocals when you’re building a song, a meal is very much the same kind of thing, you’re building around the palate from the bottom end and the bass notes to the top end, where the vocals are in the spice and acids and vinegars and lemon juice.”

“As everything evolved and we had more and more kids, [cooking] sort of became part of our family, like how do we feed this massive family every day?” Jones says, adding that they “both find cooking relaxing and therapeutic”.

The cookbook is a real reflection of how the family eat at home (think easy sausage traybake, chicken stir-fry, spag bol). Some recipes are hand-me-downs from family members (Nanny Claire’s Yorkshire pudding and Grandma Janet’s spatchcock chicken), and many are inspired by family holidays abroad (pistachio baklava with honey and orange syrup, or borscht).

Their cookbook has a section dedicated to dishes the kids love (and could even cook themselves) – the ultimate fish finger sandwich and ‘you should be in bed’ tomato toast. Homemade pizza nights are a staple in their household too. “Rather than getting them premade, it’s so easy to just roll the dough and get them involved, choosing their toppings,” says Jones.

Heat the olive oil in a large pan over a medium heat and chuck in the chorizo. Fry for a few minutes or until it starts to release a little of its oil, then add the onion and garlic and fry for a further five minutes.

Add the celery and peppers, along with the coriander and fennel seeds and fry for a further five minutes. Pour in the wine and let it evaporate a little, then add the tomato purée, chopped tomatoes and dried chilli flakes and season with salt and pepper.

Meanwhile, bring the kettle to the boil. Place the couscous in a medium mixing bowl. Pop the stock cube into a measuring jug and pour over the measured boiling water, then give it a good mix. Pour 200ml of the stock over the couscous and cover or place a lid on top. Leave to steam for five to eight minutes.

Pour the remaining stock into the tomato pan and bring to the boil. Carefully nestle the cod fillets into the sauce so they are mostly covered, then pop a lid on the pan and simmer for five minutes.

Fluff the couscous with a fork. When the fish is lovely and flaky, serve the stew with a sprinkle of parsley leaves, with lemon wedges and some fluffy couscous on the side.

A squeeze of fresh lemon juice

Squeeze a little lemon juice into the egg whites and whisk until you have soft peaks. You can do this by hand or use an electric whisk. Fold the egg whites into the mascarpone mixture and mix until well incorporated.

Pour the warm coffee into a shallow dish along with the dessert wine and the remaining sugar. Place two dollops of the mascarpone mixture in a 25 × 15cm dish, and swirl it around to cover the base of the dish.

Soak a few sponge fingers in the coffee mixture for 10 seconds, or until a little soft but not falling apart. Layer the soaked fingers on top of the mascarpone layer and continue with this soaking and layering process, until all the ingredients are used up, finishing with a layer of the mascarpone mixture.

Top with the grated hazelnut chocolate and cacao nibs to finish. Chill in the fridge for one hour before serving. You can also make this ahead and keep it in the fridge overnight.

The puzzle of not feeling forced to win

Hermes marks 50 years of Thoc with exhibition at Larnaca airport