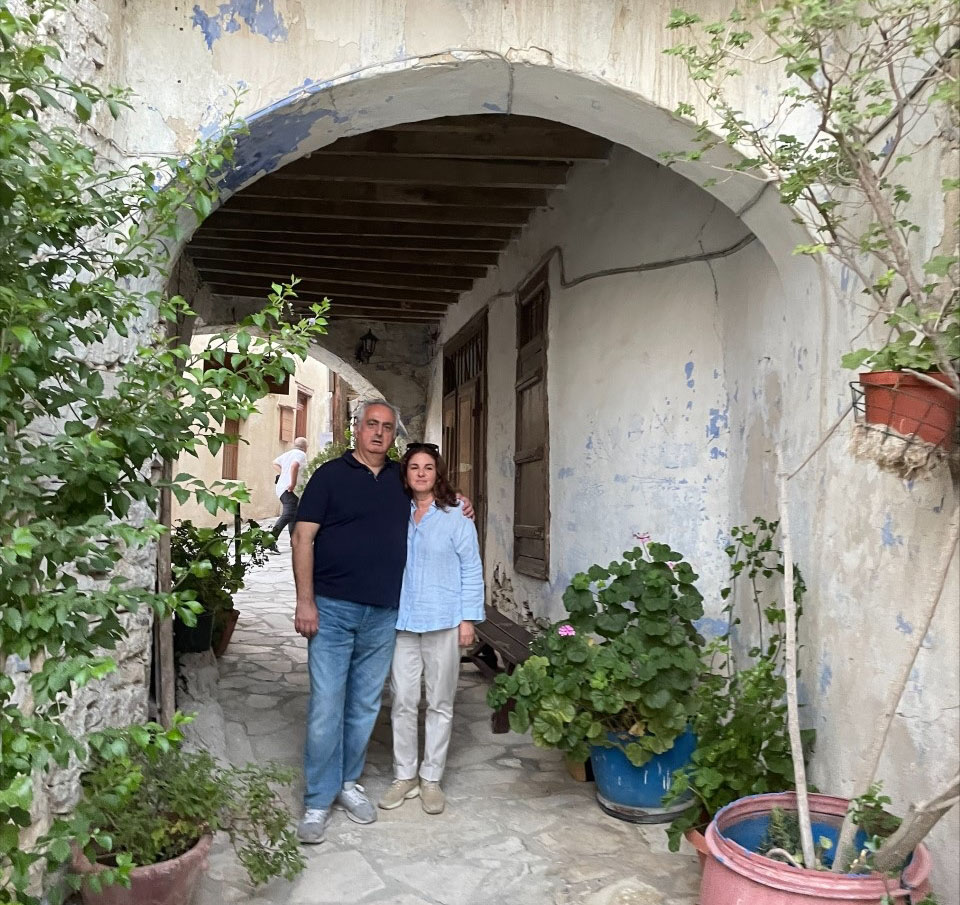 Presidential candidate Achilleas Demetriades in Fengaros with his wife Yvonne

Presidential candidate Achilleas Demetriades shifted gear in his campaign as the first stop for his minibus took him to the Fengaros music festival.

He jokingly told us that Fengaros – which means summer’s largest full moon – “is not quite Woodstock but it’s a good start!”

“It’s great to see young people engaging and creating, contributing to the regeneration of villages such as Kato Drys – so we thought this would be a good first stop,” he told the Cyprus Mail.

And that’s a core message of his campaign – getting the youth active, this time in politics; explaining that only 50 per cent of the 18-25 age group is registered to vote.

Asked what the key message is for the younger generation which he met there, he told us that: “You do not have to vote for me, but in order to vote you have to register.”

Demetriades’ new campaign bus is emblazoned with beaming youngsters, a group of key significance for the candidate.

“It’s important to note that the 50 per cent of the youth that is registered to vote are mainly affiliated with the youth wings of political parties – which in effect creates a two-level electorate: the ones who are registered through the youth parties and those who have not registered – and the latter have no voice whatsoever,” he said.

It’s a noble aim to try and get the younger generations engaged and to get out and vote, but a point which has proved tricky worldwide: they’re the demographic typically least likely to cast a ballot.

Many of those who don’t vote feel apathetic towards the election process and don’t think that their voice matters, they can’t change anything; so what does Demetriades say to them?

“I say that your voice matters to me – your voice does matter to the ‘system’ but only if you register,” he emphasised.

Highlighting that point, he added: “If you don’t register then your voice will be lost, the point is what can you do to change the situation and the conditions which we are living in? And the answer is to register and vote.”

Hammering the point, he said: “And the ones who do vote actually substitute the vote of those who do not turn up… Not voting is not a neutral act, it gives the others your 50 per cent.”

Demetriades is aiming to offer a campaign of hope and motivation, but he also warned that there must be more engagement for there to be a fully functioning democracy.

“There’s about half of the population whose voice is not heard and we must note that abstention is the biggest political party – but that shouldn’t demotivate you, it shows how significant it would be if they registered and voted,” he said.

The candidate explained that about 30 per cent of the electorate abstains, mainly amongst the youth, while another 15 per cent voted for parties who did not meet the minimum threshold to enter parliament.

“Not registering to vote is not a neutral position, it’s a negative position because you allow the others who have registered – through the party system – to take the decisions for you; so no wonder nothing changes,” Demetriades said.

“One of my key pillars is Cyprus in 2035 – where do the youth see their country being in 13 years from now? Because at the end of it all, they will survive us and it’s for them that we’re doing this,” he said.

Demetriades’ campaign is now in full swing: his political office on Kennedy Avenue opened in Nicosia last week, his minibus is up and running, and he has organised a concert for September 16 in Nicosia; with the band Onirama.

In keeping with his message, Demetriades said that pre-tickets are available to those under 30 who have registered to vote.

Until then, however, the candidate will be making full use of his campaign bus – also stopping at the Avgorou potato festival later on Saturday.

“We want to go all over Cyprus and speak with various communities about the problems they face and how we can give them a voice to address those issues,” he said.