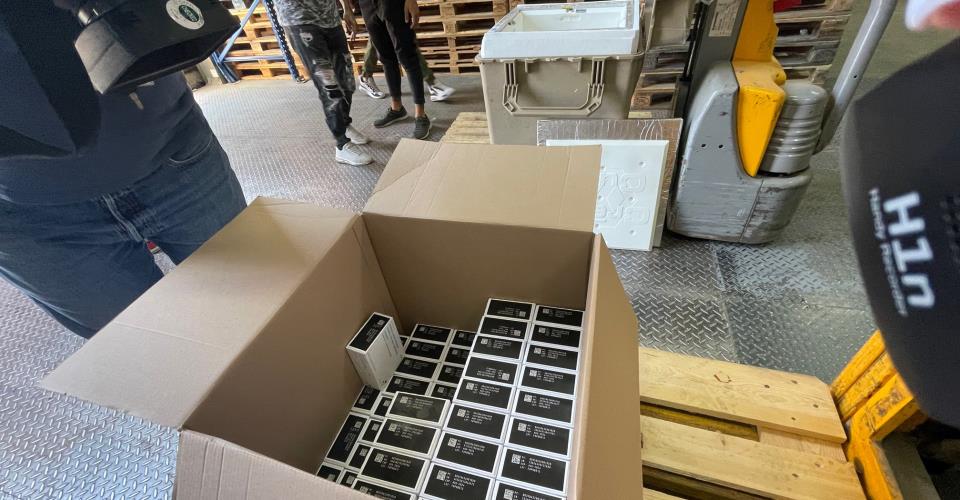 The vaccines arrived in Cyprus on Saturday

The first case of monkeypox was reported in Cyprus last Tuesday (two more were reported on Saturday), prompting a small but predictable wave of hysteria.

The mother of the 40-year-old first patient appeared on TV, urgently calling on the health ministry to import antivirals and vaccines. Meanwhile the ministry unveiled its monkeypox protocols, including the self-isolation of confirmed cases and (optional) vaccination of close contacts.

“All isolating cases will be monitored with daily phone calls and will be allowed short trips outside of the house as long as they cover their rashes and wear a mask… If they live with others, they must remain confined to a single area and have their own designated utensils.”

It’s unclear why isolating cases have to be confined to a single area, let alone wear a mask when they go outside. After all, according to the BBC, monkeypox “relies on close physical contact – usually prolonged – to pass from person to person”. Most cases so far have been in gay or bisexual men, the implication being that they caught it from sexual intercourse.

This is not a respiratory virus, so what does wearing a mask have to do with anything? Why is it even necessary to quarantine? Family members would presumably have the good sense to avoid ‘prolonged close physical contact’ with a sick person. Why is the Covid playbook being repeated in a completely different context?

There’s an odd situation playing out at the moment. Hardly anyone takes monkeypox seriously, and with good reason: though it’s a serious illness, it appears to be easy to avoid and not easily transmissible, hence not very dangerous. Yet the official messaging doesn’t seem to take account of that fact, instead portraying monkeypox as a dire threat we should all be afraid of. That puzzling imbalance is causing a lot of tension and confusion in society.

There’s a lot to be worried about here, but it isn’t monkeypox. Last month, for instance, the WHO declared the outbreak a “global health emergency” – yet the expert committee convened to discuss the matter actually decided against such a recommendation, by nine votes to six.

That should’ve been the end of it – but WHO director-general Tedros Adhanom Ghebreyesus overruled the experts, and declared an emergency anyway.

There’s nothing necessarily sinister about this. The WHO came in for some criticism for dragging its feet during the early days of Covid, so perhaps it just wants to be proactive this time and get ahead of a developing situation.

It’s worth noting, however, that the WHO is in the process of drafting a binding international pandemic treaty, potentially giving it power to impose (not just recommend) counter-measures all over the world. If that treaty were already in place, one man (Dr Tedros) might now have the power to require social restrictions and other measures for his own self-declared emergency. That’s way too much power.

Even on a local level, the health ministry’s response has some worrying gaps. We were told, for instance, that the 40-year-old man “had a recent travel history” but not where he’d travelled to, let alone how he may have contracted the illness.

Clearly, there are privacy considerations here – but, at the same time, this case is making headlines and being used to justify severe protocols. It should be possible to indicate what made this particular traveller susceptible, when all the other thousands of people with a ‘recent travel history’ didn’t get monkeypox.

After all, the constant motif during Covid was (and continues to be) governments being economical with the truth, divulging details only when it suits them. An ongoing example in Cyprus is the way the vaccination status of hospitalised Covid patients was disclosed – and indeed emphasised – for over a year, then suddenly dropped without explanation after the week of May 13 which was also (coincidentally?) the first week when the proportion of unvaccinated patients fell below 40 per cent. It looks very much like the health ministry simply stopped reporting data when it no longer flattered their vaccination campaign.

This is not the way to go about things. This new ‘health emergency’ mustn’t degenerate into another Covid. Instead of encouraging fear by laying out complex protocols and informing us of how many hospital beds (10) are being assigned for monkeypox patients, the ministry should be sharing all new information, explaining the precise risks and making commonsense suggestions on how to avoid the disease, allowing people to make their own health decisions.

It may be that Covid has left a bitter taste, making us unduly sensitive to government overreach. After all, no-one’s suggesting mass vaccination in this case, let alone lockdowns and social upheaval. Perhaps we should simply be grateful to the WHO and our health ministry for keeping an eye on this new outbreak, and making contingency plans in case it gets worse.

Still, the big lesson of the past two years is that hysteria leads to social division and unintended outcomes. And so far, the monkeypox saga has been pretty hysterical.