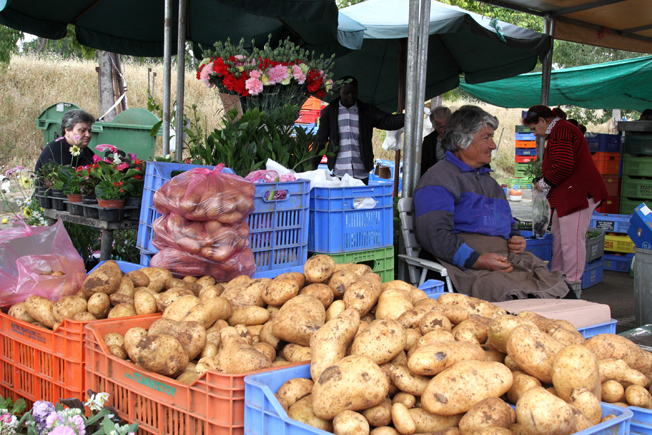 “Growing up, in the old days, we had good vegetables”

“Unfortunately, vegetables in Cyprus aren’t as tasty as they used to be,” claims Marios Kyprianou, who’s been in the hospitality industry for 27 years and run his own restaurant for the past 14. “Growing up, in the old days, we had good vegetables, these days however I personally find them tasteless.

“Tomatoes are one example, also onions, cucumbers, peppers.” There are exceptions, he admits: Cyprus potatoes are justly famous, artichokes and kohlrabi are “quite good”. Yet Kyprianou goes to Greece on foodie trips three or four times a year, not to Michelin-starred restaurants but simply to find the authentic tastes he used to find here.

TV chef Galatia Pamboridis, co-host of the CyBC show Chryses Syntages for the past five years, also finds something lacking in local produce:

“Yes I agree,” she wrote in response to our query. “Especially veggies like tomatoes are nothing compared to the tomatoes you can find in Greece. I think we’re using too many wrong pesticides or fertilisers… I don’t know.

“Having said that, you can find small producers who sell great quality products. But the majority falls short compared to Greece – and Italy, of course. Most probably Spain too. The best thing Cyprus has to offer are the lemons!” (She later amended that response to include another exception: “Cyprus avocados. Best in the world!”.)

These claims of something rotten in the state of local veggies were strongly contested at the Saturday farmers’ market in Nicosia, with producers lining up to defend their produce.

“Not at all, why should they be tastier abroad?” Stelios Papageorgiou, who comes up from Kissonerga every week to sell his wares, told the Cyprus Mail. “Ours are tastier, because we have more heat so there’s better drainage [in the soil] due to the climate.

“Our land is fertile, and we have enough nitrogen in the soil,” says a farmer called Michalis from Peristerona, “and enough sunlight, which gives taste and quality.” He too believes our vegetables are at least the equal of their counterparts in Greece or Italy.

Taste is entirely subjective, of course – not to mention that the naysayers aren’t comparing local produce with the vegetables we import from nearby countries, just the ones they find when they actually go to those countries. It’s quite possible that vegetables taste better in Greece because one seeks out good restaurants in which to taste them, or because one’s on holiday and more relaxed and receptive in general.

Still, the question remains: could there be systemic reasons why Cyprus vegetables are indeed inferior to those of our neighbours?

The Ministry of Agriculture (unsurprisingly) sides with the farmers, finding no difference in quality. That said, a source did acknowledge that producers tend to lay emphasis – when it comes to planting tomatoes, for instance – on criteria like resistance to disease, productivity, and of course appearance (based on the adage that ‘consumers shop with their eyes’), not so much flavour.

That’s also true in other countries, of course, in fact the notion of ‘local’ vegetables is a bit misleading. Farmers all over Europe now buy hybrid varieties from the same multinational seed companies.

One possible difference is that the distance to market is smaller in Cyprus, so that tomatoes – which are always picked slightly unripe – don’t have time to ripen properly. The perceived difference in taste may well be a matter of ripeness, says the ministry source, after all we employ most of the same farming methods here as they do elsewhere. That might explain, for instance, why chefs buying tomatoes for same-day consumption have trouble finding tasty ones.

Then again, it also depends what you buy. Marios, based in Solea, is another, younger farmer at the Saturday market who assured the Cyprus Mail that his own tomatoes – due to ripen in a couple of weeks – are made from traditional varieties and have that “slightly ketchup-y” taste. Marios farms organically, and believes in using compost “so the plant can choose what it wants to eat” as opposed to fertiliser which he compares to force-feeding.

That’s the elephant in the room, the fact that smaller producers are able to try other methods and create more varied produce – but, due to our small size and the way the system is set up in Cyprus, they struggle to make a dent in the market.

Greece has more outlets, says Panayiotis Nicola who also works in hospitality: more farmers’ markets, more local shops. “The supermarkets don’t regulate the market, like they do here.” He mentions his cousin, a small producer who sold his tomatoes at €0.40/kilo to a supermarket – then saw them on sale two days later at €2.80/kilo in the same supermarket. The cousin gave up in disgust, and now has a stall at the Limassol market – but that kind of DIY solution isn’t for everyone.

Nicola himself worked at The Ivy, the fabled London restaurant, some years ago, and recalls the restaurant purchasing tomatoes from both Holland and Spain – the latter at three times the price, to be used in their “premium dishes”. Bigger markets allow for gourmet niches, not just one-size-fits-all. There’s no reason why our own producers couldn’t reserve a corner of their fields for traditional varieties, admits the ministry source – but of course those would cost more. Would supermarkets want them? Would consumers put up with it?

In the end, maybe the problem is that fruit and veg is still good enough in Cyprus – we are still a Mediterranean country, after all – that people are reasonably happy even with mass-market produce, and there’s no big push for costlier niche options. Or perhaps, as with so much else, everyone’s just too set in their ways.

“Whether it’s racism or vegetable farming,” says Marios from Solea, unexpectedly taking the discussion to the next level, “we just never sit down and study a problem in Cyprus.” People believe what they’re taught to believe, spraying fertiliser (for instance) because they’ve just become accustomed to spraying fertiliser.

“It takes a certain consciousness,” he says, “to improve what you do.”