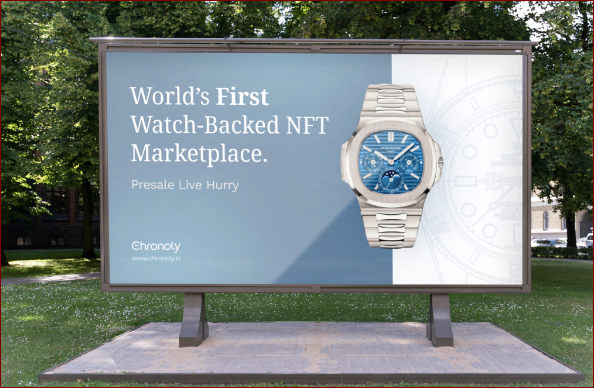 The non-fungible token is a new buzzword in the crypto market. Every week, a new NFT project enters the crypto arena. However, not all the projects meet the same fate. In fact, the recent crypto market crash has swept many projects while crippling several others. There are hardly a few projects that have been able to post positive growth during the last few months of the market downfall.

CryptoPunks and Chronoly.io are two such projects that have posted positive gains during the market crash. But both the projects are different, be it in terms of their NFT’s concept or market standing. While CryptoPunks has been encashing its earlier-earned popularity to sustain its growth, Chronoly.io, a new entrant in the market, has grown by over 560% during its pre-sale that began in May 2022.

Apart from this, the value of Cryptopunks NFTs also depends on the number of characteristics a pixel art has. Altogether there are 87 traits, such as hats, necklaces, earrings, pipes, etc., that the platform has used in its 10,000 NFTs.

On the other hand, launched in May 2022 and having tangible utility, Chronoly.io has become the bulls’ favorite in just a few weeks.

Chronoly.io enables the everyday person to own luxury watch brands like Richard Mille, Rolex, Patek Philippe, and others without needing to stomp up all of the cash. After procuring and storing those luxury watches in vaults, Chronoly mints NFTs of those rare collectable timepieces. It enables people to acquire fractional ownership of timepieces for as less as $10.

Market favoring both CryptoPunks and Chronoly, but differently

Recently, CryptoPunks NFT collection sales have jumped to the moon with an increase of 248%, according to data from CryptoSlam. The steep rise was caused by jewelry retailer, Tiffany & Co.’s, recent decision for CryptoPunks NFT holders. Tiffany has announced the launch of a separate line of NFTs, called NFTiffs, in association with CryptoPunks.

NFTiffs will be a collection of 250 digital passes that CryptoPunk holders can mint for a custom pendant.

Meanwhile, astounding investors and analysts across the globe, Chronoly.io’s performance during its pre-sale has been tremendous. Chonoly’s CRNO price has climbed from $0.01 to $0.066 since May, and analysts forecast that CRNO can be traded at $1.0 per token in the next few months. They are also expecting CRNO to go up by over 3000%.

Being the first-of-its-kind business plan, backed by real-world physical watches, provides stability and solidity to Chronoly’s NFTs and also ensures that CRNO’s value is not susceptible to market speculation or hype. This has prompted investors to trust Chronoly’s CRNO, which can be seen clearly in the level of acceptance and demand for Chronoly during its pre-sale.

However, the use of CRNO is not limited to the trading of watch NFTs. Holders of Chronoly’s CRNO can also take out loans at competitive rates against the watch NFTs they own. Additionally, they can stake their CRNO tokens in Chronoly’s lending pool to yield a passive income.

For more information about Chronoly.io presale